Why Did Buddhist Monks Self-Mummify While They’re Still Alive?

We are all about meditating and relaxing, but we don’t think we could ever reach a state where we are so calm and peaceful that we begin to self-mummify. However, between the years 1081 and 1903, at least 17 Buddhist monks managed to self-mummify through a religious practice known as Sokushinbutsu. As of 2022, 24 Sokushinbutsu mummies have been discovered. The goal of this religious practice was to demonstrate the ultimate act of dedication and discipline. 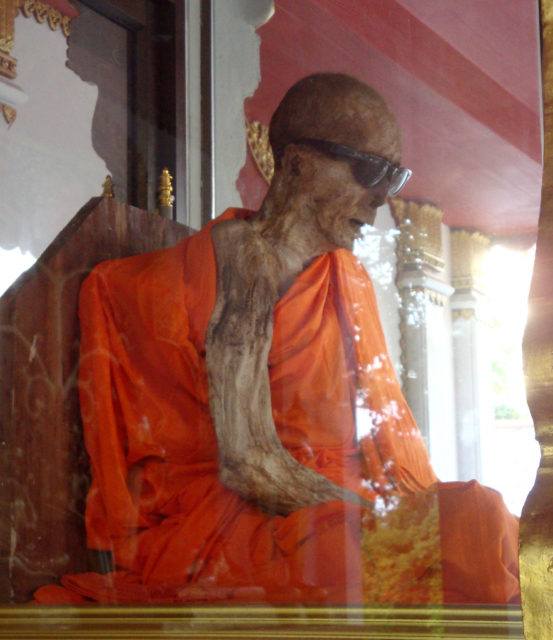 According to Buddhist studies scholar Paul Williams, Sokushinbutsu was first practiced by a ninth-century monk named Kūkai (known posthumously as Kōbō Daishi), who founded the esoteric Shingon school of Buddhism in 806. The Shingon sect became one of the most popular forms of Buddhism in Japan.

Kūkai died by reducing (and inevitably stopping) his food intake while continuing to mediate and repeat Buddhist mantras to himself. An 11th-century biography of Kūkai claimed that the monk didn’t die; rather, he crawled into his tomb and entered nyūjō, believed to be a state of meditation so intense that it induces suspended animation. According to this hagiography, Kūkai will reemerge from his meditative state in approximately 5.67 million years. 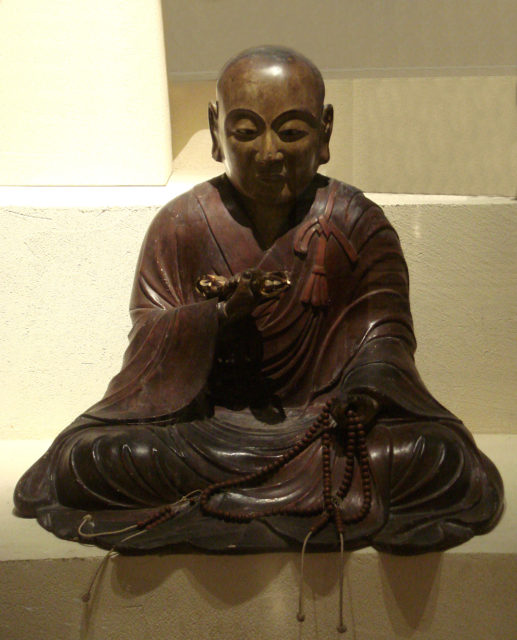 Many religions around the world identify mummification and an imperishable corpse as a mark of a remarkable ability to connect oneself with a force that transcends the physical realm. The monks who practice Sokushinbutsu do so for the redemption of humankind. They believe that their suffering prior to death will allow them to live in the Tusita Heaven where they will have the power to grant requests and protect people on earth.

A monk choosing to perform Sokushinbutsu would begin by undertaking a diet called “mokujikigyō,” which translates to “tree-eating training.” During the first portion of the process, the monk only eats fruits and nuts for 1,000 days. Nearly three years are spent meditating and continuing to perform service to both the community and the temple.

For the next 1,000 days, the monk would eat only pine needles and bark. Besides looking for suitable food, the monk’s time was primarily spent meditating. At the end of this period, a monk’s body would have wasted away through starvation and dehydration.

This 2,000-day period would have started the mummification process as the body would have rid itself of extra fat and water. Sometimes monks would drink a tea made from the bark of the urushi tree during their fasting period. This sumac tree, used to make a kind of traditional Japanese lacquer, has bark that’s full of the same toxic ingredient that makes poison ivy so dangerous to humans.

Drinking urushi tea was meant to make the monk’s body inhospitable to insects and also to bring on death faster.

Another beverage consumed by monks hoping to self-mummify was arsenic water. It had the double benefit of hastening death while preventing decay of the flesh. Many monks who have tried to self-mummify did so near Dainichi-Boo, a temple in the mountains of Japan. A spring near the site was found to contain high levels of arsenic. 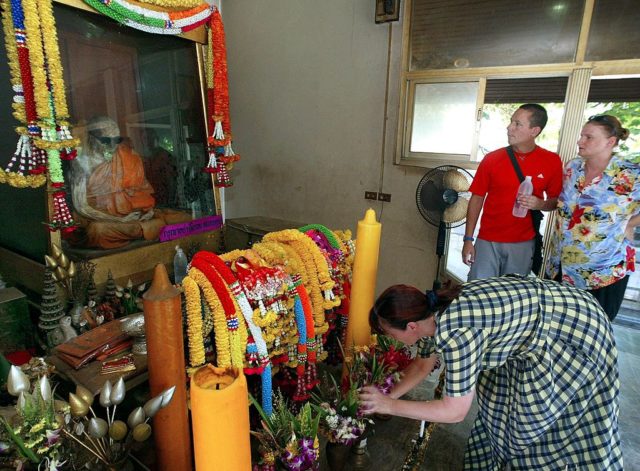 A ringing bell as a signal of death

In the final stage of the fast, the monk would enter a very cramped, specially-built tomb where he would sit and meditate as the crypt was sealed. A small portion of the tomb was left unsealed, which would let air in. The monk would spend his last days meditating and occasionally ringing a bell to tell the outside world he was still breathing. Once the bell stopped ringing, the tomb would be completely sealed off.

After another 1,000 days, the monk’s followers would open the tomb to examine the body. No decay meant that the monk had successfully reached Sokushinbutsu, and the body would be dressed in robes, placed in a temple, and worshipped as a Living Buddha.  The eyeballs of the deceased would be removed, but it is believed that the mummies can see into the souls of those still living.

If there was decay, the monk would be reburied with great honor for his valid attempt. 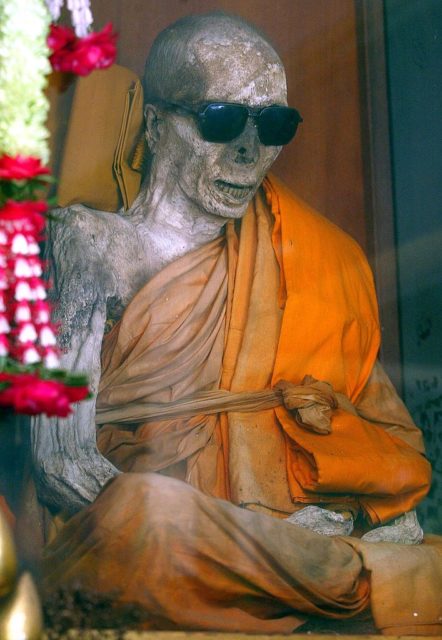 The first known intentional attempt of Sokushinbutsu came in 1081 by a monk named Shōjin. Shōjin’s effort was unsuccessful, as his body began to decay. Since then, over 100 monks have attempted to reach Sokushinbutsu with only around 20 or so being successful. 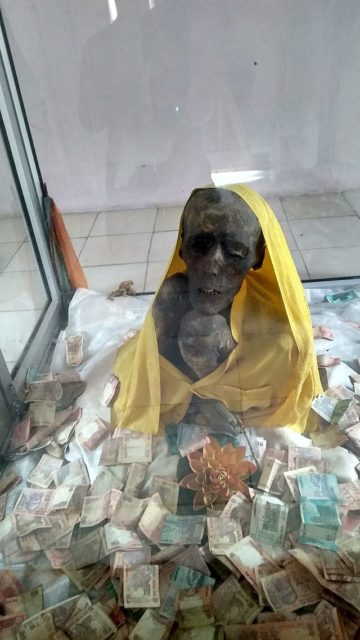 This is believed to be the corpse of Sangha Tenzin (Photo Credit: Shivendujha, CC BY-SA 4.0)

One of the most famous self-mummified corpses in existence is that of a Buddhist monk named Sangha Tenzin. His remains were discovered in 1975 in Gue, located in the Indian state of Himachal Pradesh.

Originally from Tibet, Sangha Tenzin went to Gue, India, for meditation when he was 45 years old. Local folklore states that he sacrificed himself to save the village from scorpions, and that a rainbow appeared in the sky after his selfless act. Today, the body is still worshipped as a “living God,” and it’s claimed that the hair and nails are still growing.

The practice was outlawed in Japan 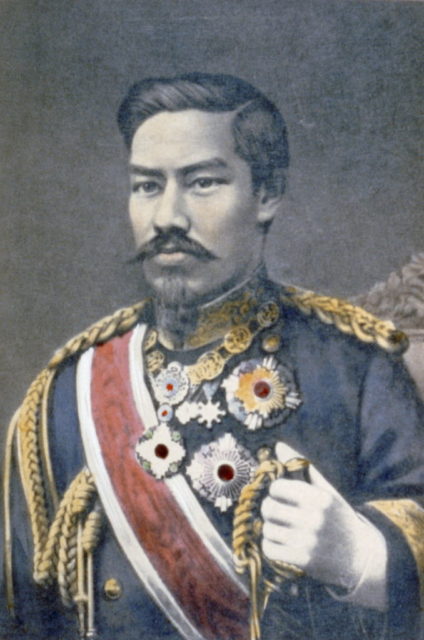 The Meiji period, or Meiji era, denotes the 45-year reign of the Meiji Emperor Mutsuhito, running, in the Gregorian calendar, from 23 October 1868 to 30 July 1912. During this time, Japan started its modernization and rose to world power status. This era name means “Enlightened Rule” (Photo Credit: Buyenlarge/Getty Images)

More from us: 3,500-Year-Old Mummy of King Amenhotep I Has Been Digitally Unwrapped

In 1879, Japanese Emperor Meiji outlawed self-mummification in his country. Specifically, the law banned anyone from opening the tomb of a monk who had attempted to self-mummify, unless the monk had entered the tomb before the law went into effect. Assisted suicide and religious suicide are also illegal in the country.

The last known successful Sokushinbutsu mummy is a monk named Tetsuryūkai, who today is enshrined at the Nangaku Temple, located in the Shonai district of Yamagata.

« The Story of Angelyne, the Billboard Diva Who Inspired NBC’s New Mini-Series
We Can’t Believe These Facts About Our Favorite Celebs »