The endearing love stories, extravagant lifestyles, and sophisticated fashion of the Regency Era have captivated our hearts since Jane Austen first introduced the world to the mysterious Mr. Darcy. While the romances of Pride and Prejudice and Bridgerton showcase the regal side of Regency England, the life of the most powerful man in the country, King George IV, was far from refined.

George IV quickly developed an over-indulgent lifestyle that transformed the most desirable bachelor in England into a favored object of contempt and mockery in Regency society. 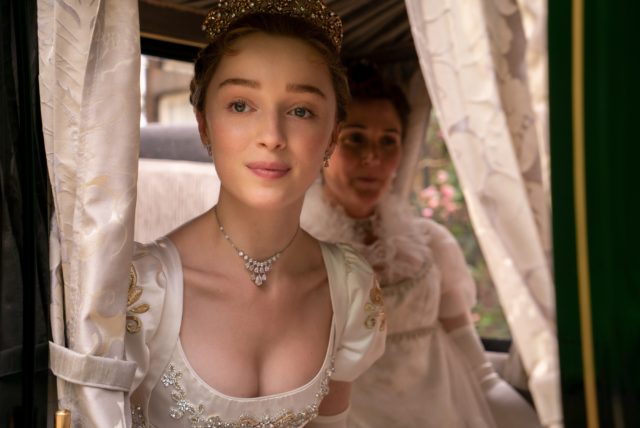 The Regency Era spanned from 1811 to 1820, receiving its name from the biggest scandal at the time. In 1810, the current ruler King George III began a descent into madness – forcing lawmakers to pass the Regency Act of 1811 that appointed the King’s oldest son George, Prince of Wales, as Prince Regent. As Regent, Prince George took over the political duties of the King while his father’s health continued to decline. 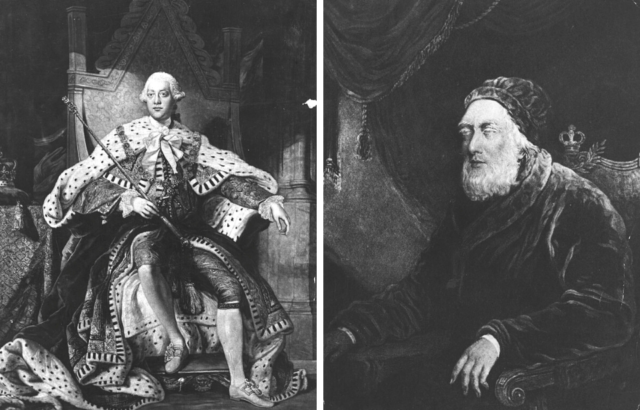 King George III ruled England from 1760 to 1820 alongside his wife, Queen Charlotte of Mecklenburg-Strelitz. During his early reign, George III shaped England into the leading European nation through expansion into colonies in Africa, Asia, and the Americas.

Major conflicts like the Seven Years’ War between England and France and the American War of Independence defined the future of the United Kingdom while increasing awareness of social issues led to the abolition of slavery in 1807. Regency Era England fostered a new generation of forward-thinkers and creatives like Jane Austen, Lord Byron, Mary Shelley, and William Wordsworth. 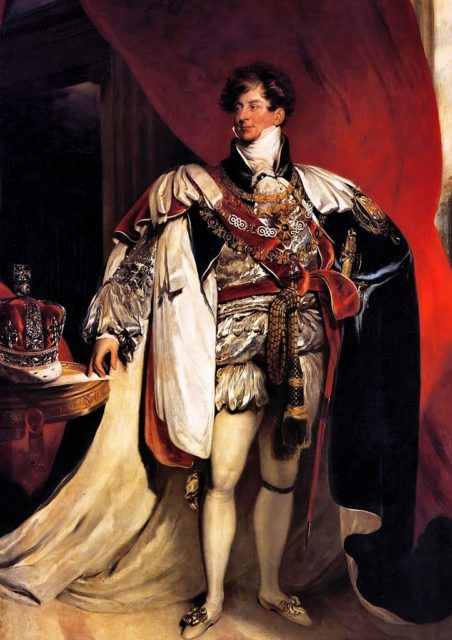 By 1810, King George III had reached the height of his popularity amongst his subjects. But by this time, he was nearly blind from cataracts and suffering from rheumatism. The final trigger that led to his descent into mental illness occurred with the death of his youngest daughter, Princess Amelia.

He reportedly sank into a deep depression, eventually developing dementia – causing him to speak nonsense for days at a time. King George III died from pneumonia in 1820, and his son and regent George IV was crowned king – but his reign would be cut short following his death in 1830.

As a young man, the Prince Regent was considered the ultimate gentleman, and his impeccable sense of style reflected his highly-educated and worldly personality. Much of British high society during this period revolved around the tastes of the new Prince Regent, who loved all things refined and sophisticated.

George IV encouraged many new movements in art, music, literature, and science, and this same refined taste also applied to the daily life of the wealthy elite. However, as the Regency Era continued, George IV began to crack under the pressure of living in his father’s menacing shadow. 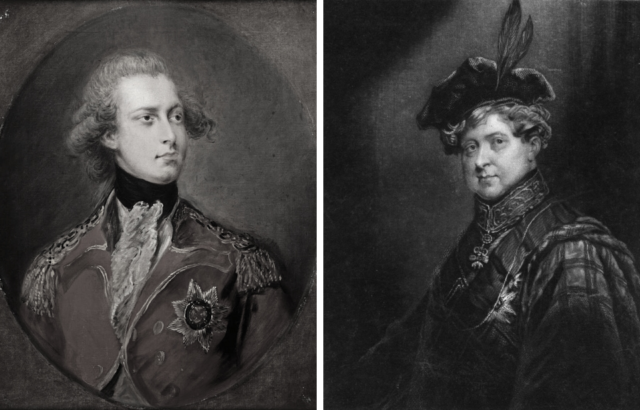 Unlike his father, the Prince Regent wasn’t popular with his subjects. When it came to politics, George IV barely kept the British parliament in functioning order. He all but surrendered his power over parliament, letting the ministers take full charge of all government affairs – whereas his father had been deeply involved in politics.

George IV traded his involvement in politics with all matters of style and taste. He befriended popular “dandy” and style icon Beau Brummell and other influential figures who helped to craft the iconic style of the Regency period. The Prince Regent also spent most of his time at the newly built Brighton Pavilion, a palatial seaside spa that closely resembles the Taj Mahal. 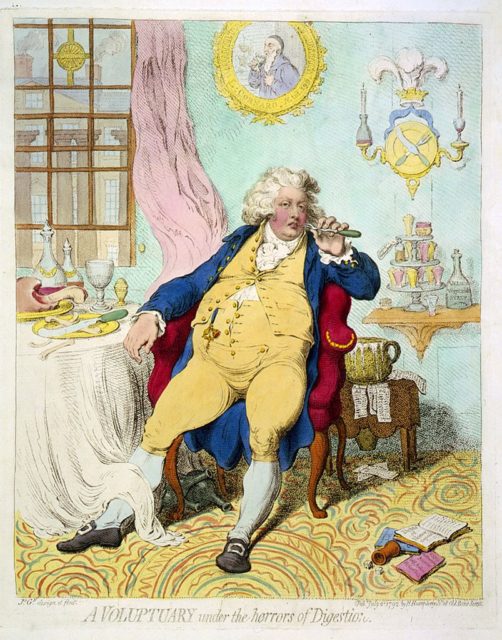 ‘A Voluptuary under the horrors of digestion’ cartoon of George IV by James Gilray, 1792. (Photo Credit: Universal History Archive/Getty Images)

As a young man, Prince Regent George IV had been the most desirable bachelor in the country, but he soon became remembered for his overindulgent eating patterns, long list of ailments, and wide waistline. He supposedly began each day with three parts of a bottle of wine, a glass of champagne, two glasses of port, and a glass of brandy, followed by two pigeons and three steaks.

To maintain a presentable figure, it took three hours to squeeze George IV into a girdle and whalebone corset. By the time he was crowned King in 1820, George IV’s extravagant lifestyle had left him obese, alcoholic, and addicted to opium.

While the Regency Era is remembered as sophisticated, stylish, and democratic, the man who first inspired the Regency movement was anything but. As the King became more grotesque and ill, political cartoons depicting George IV as a fat, bumbling fool made him the laughing stock of Regency society.

Even George IV’s own senior aide could barely stand the King. According to a diary entry: “A more contemptible, cowardly, selfish, unfeeling dog does not exist … There have been good and wise kings but not many of them … and this I believe to be one of the worst.” Others described the King’s appearance as “like a great sausage stuffed into the covering.”

George IV also fell under intense scrutiny following the death of his wife Caroline. The King and his Queen had lived separately since 1796, and both had several affairs at this time. While Caroline wanted to assert herself as Queen consort at the time of George IV’s coronation, he refused to acknowledge her as his queen. 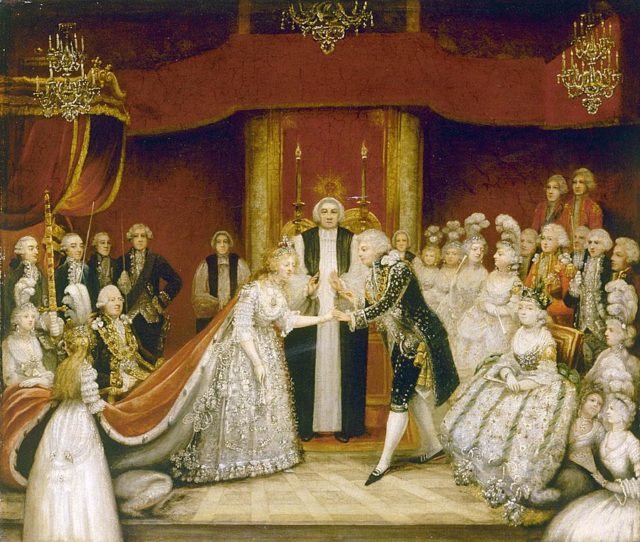 George IV tried to pursue a divorce and even proposed a bill that could annul their marriage, but public outrage quickly tabled the king’s idea. George barred his wife from attending his coronation in July 1821. Caroline fell ill and died on August 7, 1821 – during her illness, she insisted that her husband poisoned her.

The heir history loves to hate

By 1830, George IV had developed gout, arteriosclerosis, peripheral edema (“dropsy”), and possibly porphyria. He became blind in one eye and weighed over 300 pounds. He died on June 26, 1830, at 67 years old – only ten years after he was officially crowned King of England.

In order to protect historic Windsor Castle from damage, the walls of the palace were lined with temporary wood panels to prevent the King’s coffin from wrecking valuable architecture should the weight overtake the pallbearers. 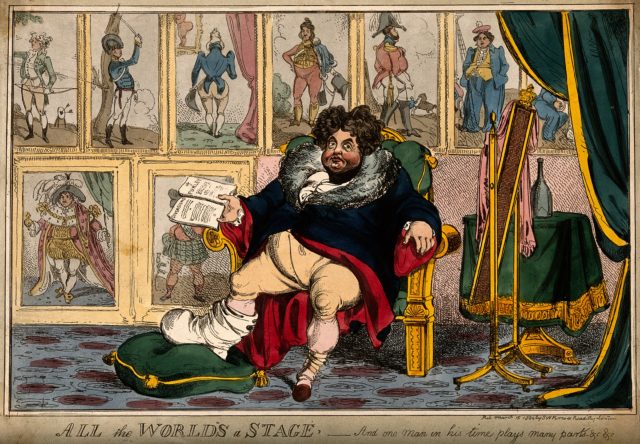 Even though his eulogy praised George IV for being “the most accomplished man of his age,” the legacy of George IV remained scarred by his selfish personality. After his death, British nobles like the Duke of Wellington came forward with their own opinions of the larger-than-life monarch: “[George IV was] the worst man he ever fell in with his whole life, the most selfish, the most false, the most ill-natured, the most entirely without one redeeming quality.”

The majority of Regency England celebrated the King’s death, even The Times pondered “There never was an individual less regretted by his fellow creatures than this deceased king. What eye has wept for him? What heart has heaved one throb of unmercenary sorrow?”

George IV, the father of Regency style, accomplished more than his subjects gave him credit for – after all, Regency romance fans have the gluttonous king to thank for trends like the signature high collar and billowing linen shirt as seen on Mr. Darcy in the iconic Pride & Prejudice film adaptations. 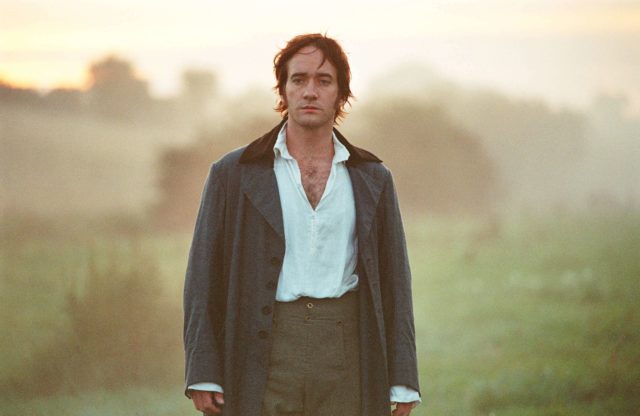 More from us: Regency Era Facts That Seem Surprisingly Unsophisticated To Us

Unfortunately, George IV’s only heir, Princess Charlotte of Wales, died in childbirth in 1817. He was succeeded by his younger brother, William III until Queen Victoria was crowned in 1837 – ushering in a new era that did away with the overindulgence and excess of Regency life.

« An Arrest Warrant in the Emmett Till Case Was Found 70 Years Later
Fascinating Facts About Elvis Presley, the King of Rock and Roll »