The Hollywood Sign is a symbol of the rich history of Los Angeles from the early days of Tinseltown to the mecca of entertainment and luxury it is today. In true Hollywood style, the story behind the sign includes tragedy, wealth, fame, and even a resident ghost! From real estate advertising to political statements, the Hollywood sign has truly seen it all. 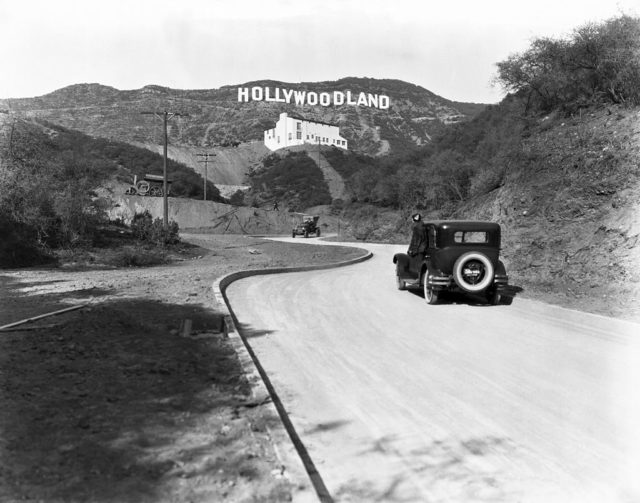 A sign advertises the opening of the Hollywoodland housing development in the hills overlooking Los Angeles, circa 1924. (Photo Credit: Underwood Archives/Getty Images)

Hollywood was founded in 1887 by Harvey Wilcox, a strong believer in the temperance movement who dreamed of building a community that reflected his sober religious beliefs. H.J. Whitley, known as one of the “Fathers of Hollywood,” later transformed the area into a luxurious community for the rich and famous.

The Hollywood Sign, originally the “Hollywoodland” Sign, was first erected in 1923 on Mount Lee to promote an upscale subdivision in the Beachwood Canyon area of Los Angeles. Fitted with 3,700 lightbulbs, the famous sign began illuminating the Hollywood hillside in December 1923. In 1944, ownership of the land the sign sits on was transferred to the City of Los Angeles. The city later restored it to its former glory, but removed “land” from the sign – giving us the beautiful white “Hollywood” sign we know today! 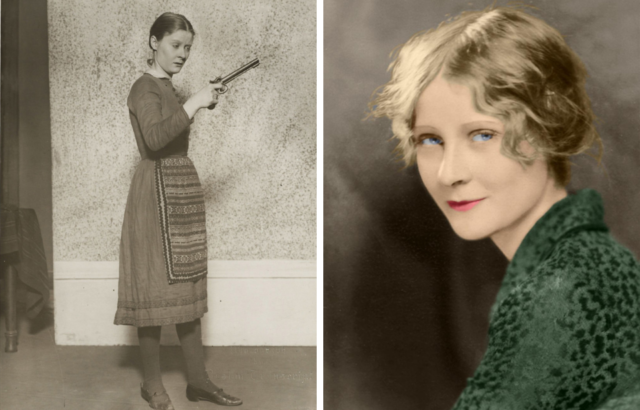 In September 1932, a hiker found a women’s shoes, purse, and jacket at the bottom of the canyon below the Hollywood sign. Inside the purse, the hiker discovered a note that read: “I am afraid I’m a coward. I am sorry for everything. If I had done this a long time ago it would have saved a lot of pain. P.E.” 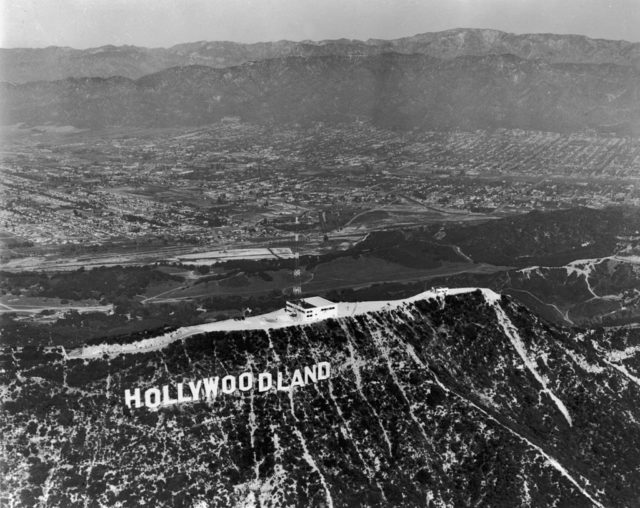 The Hollywoodland Sign shows the valley along the Hollywood Hills where Peg Entwistle was found, circa 1935. (Photo Credit: Hulton Archive/Getty Images)

Unfortunately, the hiker’s worst fears about what had happened to the author of the note were true. At the bottom of the ‘H’ of the Hollywood sign laid the body of 24-year-old Millicent “Peg” Entwistle. Peg moved to Hollywood from England following the sudden death of her parents. While living with her aunt and uncle who worked in the theater business, Peg fell in love with acting. She attended the prestigious Guild School in Manhattan where she performed in plays.

In 1927, Peg married fellow actor Robert Keith. What began as a loving marriage soon turned sour when Peg discovered that Keith had lied to her about never being married before. Peg suffered through an abusive marriage until she was finally granted a divorce in 1929. Peg returned to acting and began to land some serious roles in films alongside huge stars like Humphrey Bogart.

Peg signed a contract with RKO Pictures to appear in a new film called Thirteen Women, but she snubbed two previously booked gigs to start working with RKO – a huge faux pas in the acting community. 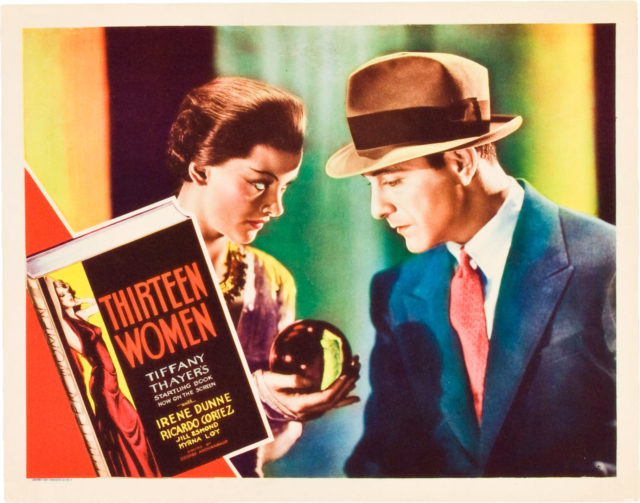 Troubles with the script of Thirteen Women eventually reduced Peg’s role down to no more than a cameo. Peg was let go from RKO and soon lost her apartment and most of her personal property, and to make matters worse, she was ostracised from the acting community because of her broken commitments.

On September 16, 1932, 24-year-old Peg Entwistle climbed to the top of the Hollywood sign and plunged to her death from the letter ‘H.’ Soon her name was forgotten, replaced with the moniker “the Hollywood Sign Girl.” Some even believe that her ghost haunts the area around the iconic landmark.

The Hollywood sign has undergone several facelifts throughout the years. The first major restoration took place in 1949, which removed “Land” from the original sign. By 1973, the sign had fallen into disrepair. The sheet metal was rusted, warped, and falling apart while the wooden structure was near collapse. 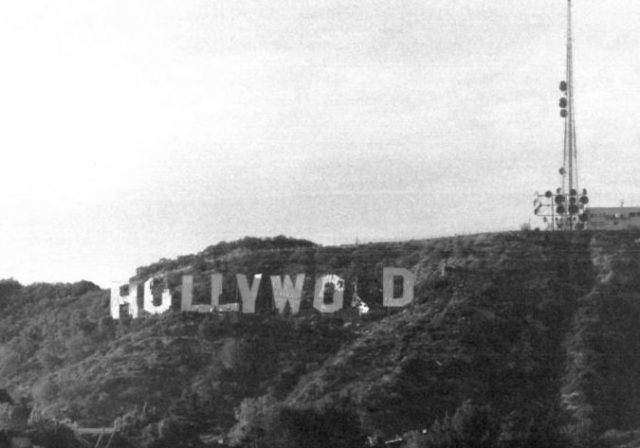 The sign was designated a historic monument and $15,000 was raised to paint the sign in a rust-resistant coating followed by several coats of white paint, but the structural integrity of the historic landmark was still at risk. In 1978, a massive storm cause major damage to the sign. Upon inspection from an engineer, it was revealed that the wooden poles that had kept the sign standing all those years were infested with termites – it would only be a matter of time before the whole thing collapsed.

The Hollywood Chamber of Commerce launched a $250,000 fundraising campaign to save the sign. One of Hollywood’s most famous residents, Hugh Hefner, announced that he would throw a huge fundraising bash at the Playboy Mansion. The star-studded bash required a $150 per person donation, and in just one night Hefner raised $45,000 for the Save the Sign effort. 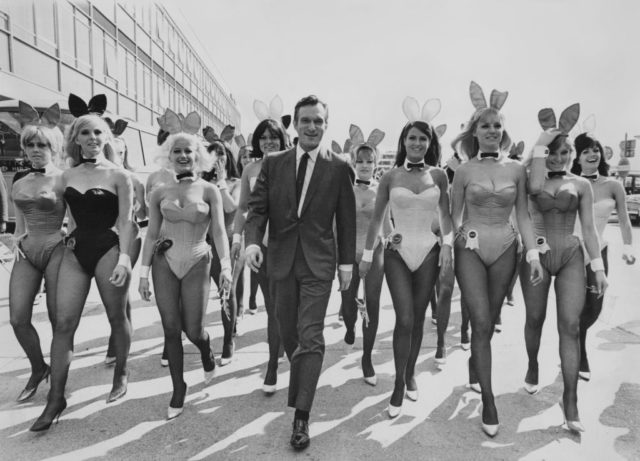 The original sign was demolished on August 8, 1978, and for the first time in 55 years, the Hollywood hillside was completely vacant. Thanks to Hugh Hefner and others like Alice Cooper, Andy Williams, and Warner Bros. Records, a brand new Hollywood sign, the largest sign in the world, shone brighter than ever before!

But that wasn’t all. In 2010, the Trust for Public Land began protesting a proposed 138-acre luxury property development surrounding the sign on Mount Lee. They were given an ultimatum from the developers: pay $12.5 million up front and the 138 acres would remain untouched. The trust was able to fundraise most of the money, but as the deadline approached they were short $1 million.

Luckily, Hefner heard about the fundraiser and donated $900,000 to the cause. In an interview with People Magazine, Hefner shared his feelings about the possibility of the land being sold after all the hard work to restore it in the ’70s: “It would have been a real shame after having restored it if it wound up sold… It’s become something iconic and represents not only the town but represents Hollywood dreams, and I think that’s something worth preserving.”

Pranksters throughout the years

The Hollywood sign has seen its fair share of pranks throughout the years. During the 1973 restoration, someone snuck up to the sign and covered the letter ‘D’ with a picture of singer Leon Russell and the text: “Save the Sign.” In January 1976, the Hollywood sign was changed to read “HOLLYWEED” as a protest against California’s regulation of marijuana and the same happened a second time exactly 41 years later, in 2017. 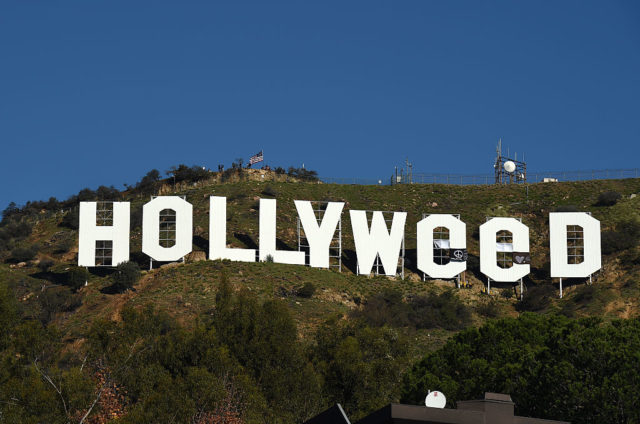 The Hollywood Sign changed to Hollyweed on January 1, 2017. (Photo by Axelle/Bauer-Griffin/GC Images)

More from us: Former ‘Girl Next Door’ Claims The Playboy Mansion Is Haunted

Other notable changes to the sign include “HOLYWOOD,” a nod to Pope John Paul II during his visit to Los Angeles and “OLLYWOOD,” a direct reference to Oliver North’s Iran-Contra trial testimony in 1989.

« George Washington’s Wig: The Truth Behind the First President’s Iconic Hairstyle
From Piggate to Partygate: The Scandals of 7 British Prime Ministers »