Halfway between San Francisco and Los Angeles sits one of the most extravagant mansions in the United States. Hearst Castle was owned and occupied by publishing tycoon William Randolph Hearst, who frequently hosted lavish parties for Hollywood’s elite at his estate. What we wouldn’t give to be a fly on the wall at these parties! 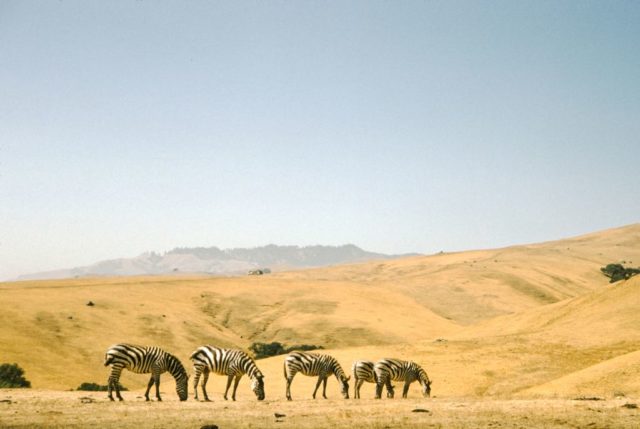 Today, visitors to Hearst Castle might be surprised to see a zebra or two wandering around the grounds. These animals are the only living testament of the castle’s old zoo, which was once the largest private zoo in the world. Formally known as “The Hearst Garden of Comparative Zoology,” this zoo was meant to feel like a real safari for guests.

The menagerie at the Hearst Castle included antelopes, zebras, camels, kangaroos, ostriches, giraffes, jaguars, bears, lions, exotic birds, and even an elephant. Some of these animals roamed free while other animals were enclosed in cages. The upkeep for these animals was very expensive, causing Hearst to disassemble the zoo in 1937. Today, visitors can still see the vacant menagerie cages and zebras roaming the area. 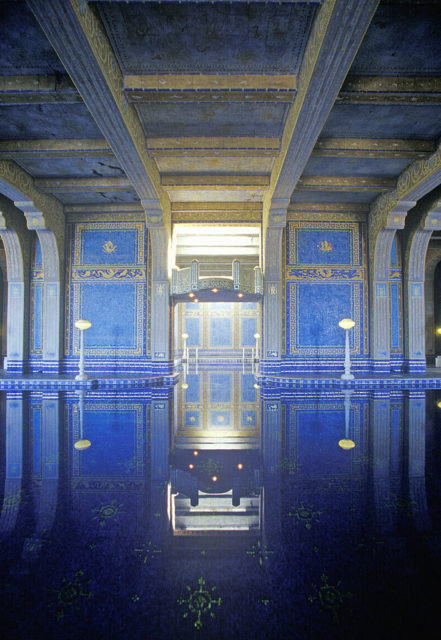 Receiving an invitation to visit Hearst Castle meant that you had officially made it as an important person in society. Guests only got one invitation. If they turned it down, they were never invited to the castle again. Actress Katharine Hepburn supposedly always regretted that she turned down the one invitation she had received.

Many celebrities were regulars at Hearst Castle, including Clark Gable, Carole Lombard and Charlie Chaplin. Other Hollywood stars including Greta Garbo, Joan Crawford, Cary Grant, Bob Hope, and James Stewart visited the castle. Similarly, political figures including Winston Churchill and Calvin Coolidge all were guests of William Hearst at his estate.

3. There were strict rules at the Castle 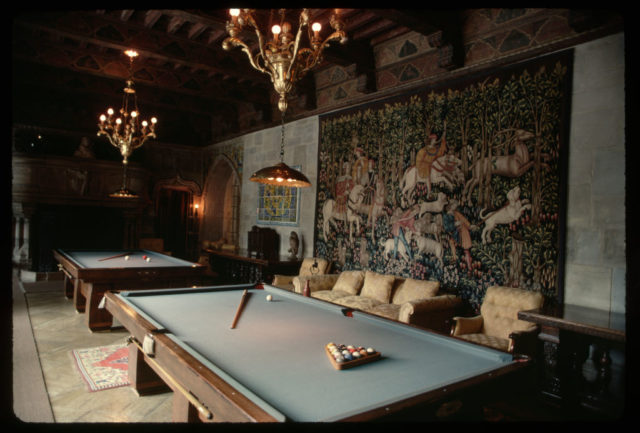 Despite the lavish parties that were thrown at Hearst Castle, the host made his guests follow a strict set of rules. Guests could not bring their own alcohol and were expected to only drink at dinner when alcohol was served. Hard liquor was restricted at all times at the castle. According to Cary Grant, “you’d get one weak martini, or two if you were quick!”

Food was also not permitted anywhere on the property except for the main dining room in the primary building. This meant that all guests had to show up at a specific time for dinner if they wanted to eat anything.

Another rule of Hearst’s was that there should be no sexual relations between any unmarried couples. In fact, after dinner, Hearst would always screen a movie in the private cinema at the castle. Many guests reported that these movies were heavily edited to omit any scandalous scenes. 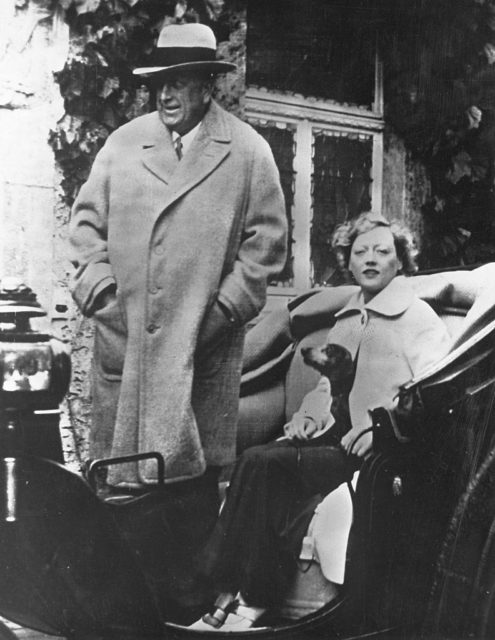 Many guests broke the strict rules of the castle, including Hearst himself. The lavish estate was supposed to be a home for the tycoon and his wife to raise their family. However, Hearst began a scandalous affair with actress Marion Davies. Together, he and Davies lived together out of wedlock at Hearst Castle, because his wife refused to grant him a divorce.

Marion Davies also broke William Hearst’s strict rules. According to one story, one night at dinner, a gin flask fell out of Davies’s purse. Davies, who was a well-known alcoholic, asked a disapproving Hearst how he liked her “new perfume” to try and cover up the fact that it was hard liquor. Cary Grant and David Niven were also known to creep the halls late at night to see who was still awake and wanted to continue partying.

5. Cary Grant dropped sacks of flour on the castle 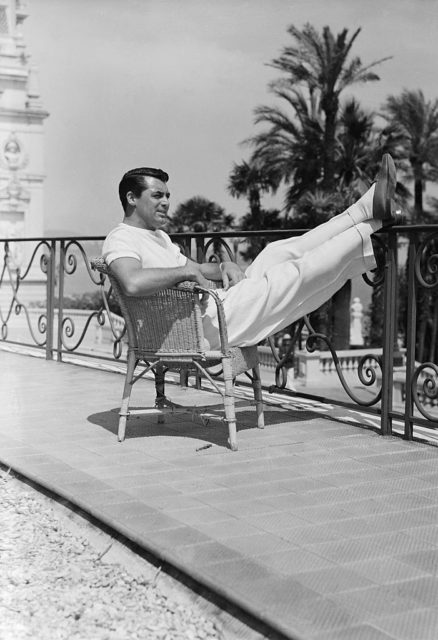 Actor Cary Grant was a frequent guest at Hearst Castle, as he was friends with not just the publisher, but also Hearst’s son (also named William). Both Grant and William Jr. loved a good practical joke.

On one occasion, the two friends flew over the estate in an airplane and threw flour over the castle grounds. The estate was covered in white power, angering Hearst Sr. By the time Cary Grant was back on the ground, he found his suitcase packed and waiting by the door. 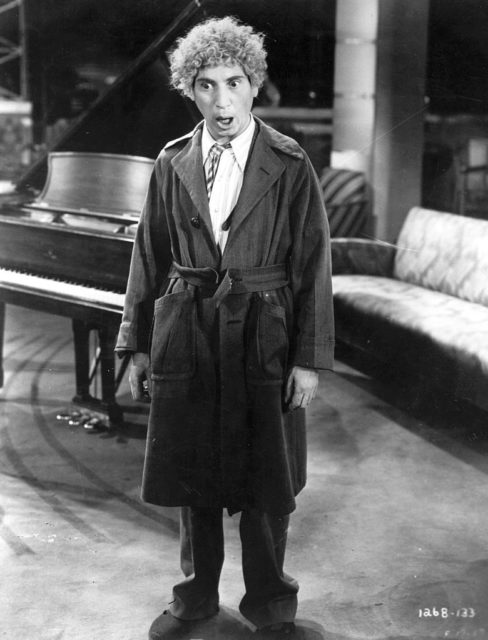 Hearst Castle contained many vaults where William Hearst stored valuable items, including a number of minx coats. One evening, Harpo Marx found his way into a vault and discovered these opulent fur coats. He thought it would be funny to dress the outdoor statues in these coats.

The practical joke might have gone over well if it didn’t pour rain overnight. When William Hearst, Marion Davies, and the rest of the guests woke the next day, they discovered the ruined fur coats and were not amused.

7. They went all out for costume parties 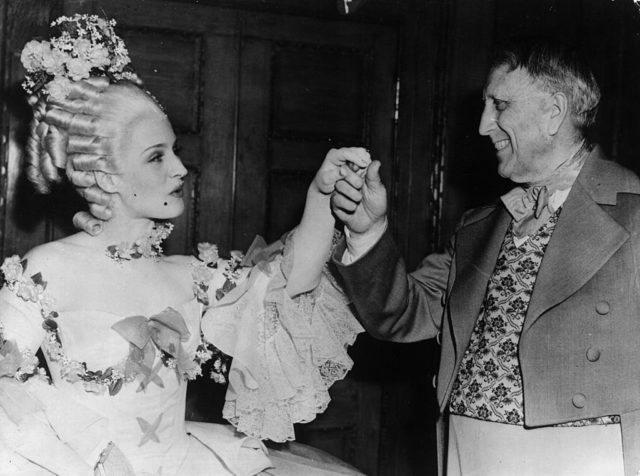 Hearst Castle was known for its costume parties. William Hearst would go all out for these costume parties, and would often bring make-up artists and seamstresses from Hollywood to the castle to ensure all the costumes were authentic.

Some of the costume party themes included the Old West, the Civil War, the circus, and American history.

8. Hearst Castle was the inspiration for Xanadu in Citizen Kane 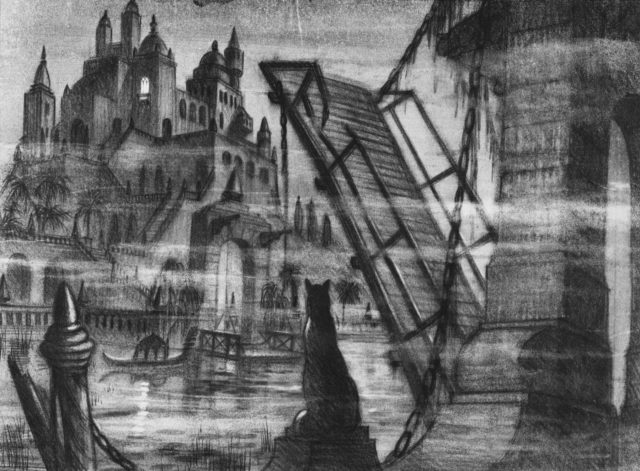 More from us: How Did Citizen Kane Go From Flop To Top Film Of All Time?

The movie Citizen Kane was loosely based on the life of William Hearst. As such, the fictional estate of Charles Foster Kane, known as Xanadu, was based on the real Hearst Castle. Like Hearst’s estate, Xanadu featured a menagerie of animals, a castle-like facade, a collection of antiquities, and valuable artwork.

« The UK Tried This Woman for Witchcraft – During the Second World War!
All Aboard ‘The Love Boat’! But What Happened After the Voyage…? »