The Exhumed Guanajuato Mummies Whose Faces Scream In Terror

When cemetery workers in Guanajuato, Mexico, disinterred some corpses in the 1850s, they were shocked by what they saw. Before them were perfectly preserved mummies of all ages and sizes, but with a striking feature that certainly sent chills down their backs: the dead all looked as though they were screaming in terror. For some of the corpses, that terror was likely real.

Cholera caused a spike in deaths 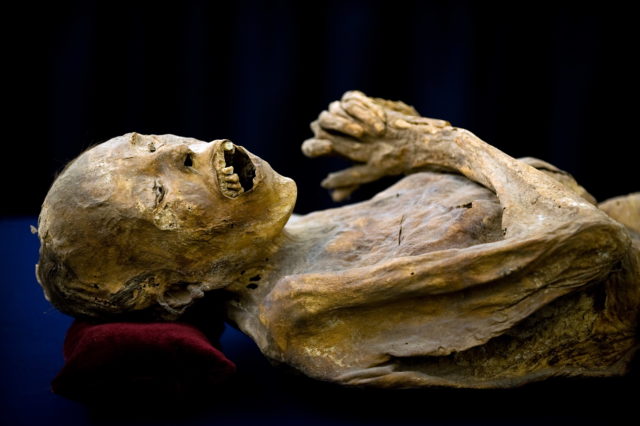 A mummy on display during a press conference to launch an itinerant exhibit of 36 of the famous Mummies of Guanajuato, in Mexico City, on August 31, 2009. (Photo Credit: LUIS ACOSTA / AFP / Getty Images)

With such a large number of bodies needing burying, the cemetery ran out of room to inter the dead underground. Instead, the cemetery was forced to create above-ground crypts to house the surplus corpses they couldn’t handle.

Families were expected to pay a grave tax 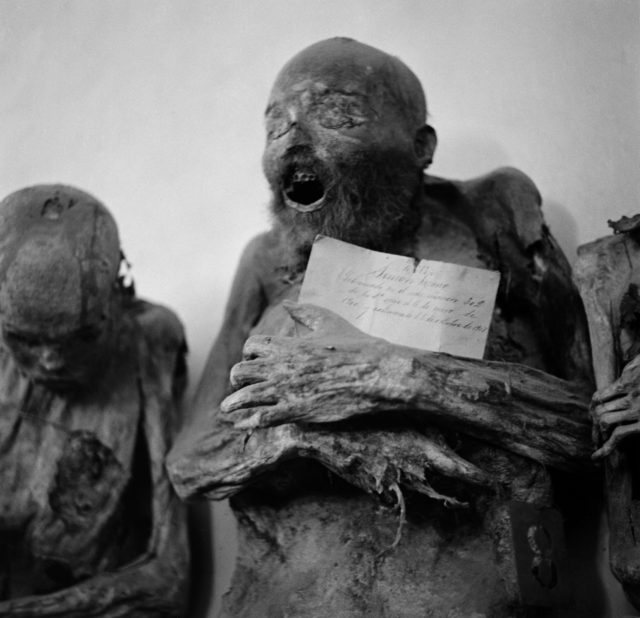 From 1865 to 1958, residents of the town with deceased relatives were expected to pay a yearly grave tax that prevented their late relatives’ corpses from being exhumed. If families were unable to pay the tax, the corpses would be dug up and relocated to a storage ossuary. They were kept here in case their relatives were able to find the money to pay the tax and have the corpse reburied.

Many families were unable or unwilling to pay the grave tax, and exhumations began in June of 1865. The first to be dug up was Dr. Remigio Leroy, and what workers quickly noticed when they saw him was that his corpse had undergone a mummification process that kept him remarkably intact.

In fact, virtually all of the removed corpses were in such a condition. This was the result of tightly sealed graves, as well as a dry, temperate climate, that caused their bodies to dry out before decomposing. An estimated 111 mummies were unearthed from the cemetery. 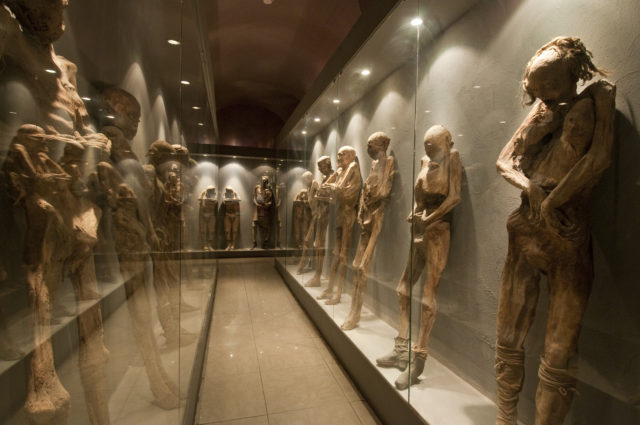 As workers continued to exhume the relatives of those who could not afford the grave tax, rumors about the condition of the mummies began to circulate. The mummies appeared to be in a state of terror, their faces twisted and shocked. In reality, their open jaws are the result of their skin transforming into leather, but the effect it had made people curious about the mummies.

Visitors would pay workers a couple of pesos to catch a glimpse of the mummies, which were pinned against the walls of the ossuary. Eventually, the cemetery’s mummies were drawing enough visitors that in 1894, it was rebranded as a museum.

By 1972, helped by the release of the Mexican b-horror film, Santo Versus the Mummies of Guanajuato, the mummies had received enough popularity that they were moved to an official museum, El Museo de las Momias, and housed in glass display cases. 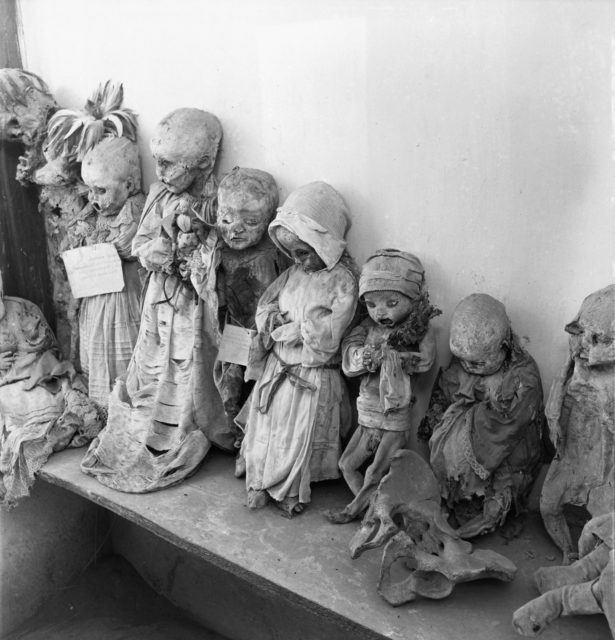 Children from the turn of the century mummified in their communion and christening dresses, lie in the vault of the Panteon Cemetery in Mexico. (Photo Credit: Hulton-Deutsch Collection / CORBIS / Corbis / Getty Images)

One of the mummies on display at El Museo de las Momias is Ignacia Aguilar. When Aguilar was dug up, she was found face-down in her tomb, biting at her own arm. She had wounds on her forehead and her hands were up by her face as though she were scratching at the tomb in an effort to escape.

Aguilar had suffered from cholera, which caused her to experience an attack of catalepsy. Catalepsy causes symptoms of paralysis and rigidity and slows down the heartbeat. It’s believed that Aguilar was improperly pronounced dead and was ultimately buried alive.

Her last moments alive were likely gruesome, and the museum’s description on her display reads: “In the last minute of her life the woman must have experienced anguish, desperation and horror. Just the fact that she was in a completely dark and confined space with no means of saving herself generates among us a deep feeling of compassion and grief.” 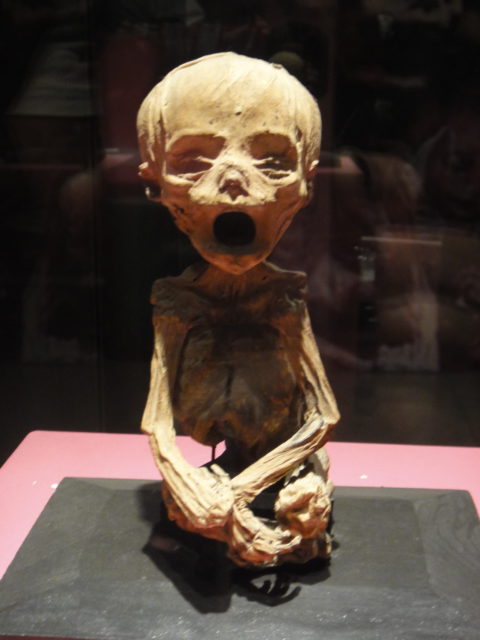 The fetus of the smallest mummy in the world sits upright on display at the museum. (Photo Credit: ReyungCho / Wikimedia Commons CC BY-SA 4.0)

Also on display is the mummy of a 40-year-old woman who died while pregnant. Her belly deflated completely, showing where the child would have been developing inside her. This woman is believed to have lived an impoverished life as part of an extremely poor family, as she did not receive the proper nutrition necessary for a woman going through pregnancy, especially at her age.

Notably, along with this woman is the 24-week-old fetus that she was carrying before she died. Not quite a fully developed child, the unborn fetus is eight inches long with an oversized skull and small awkward limbs. This child mummy is believed to be “the smallest mummy in the world.”

Other mummies at the museum 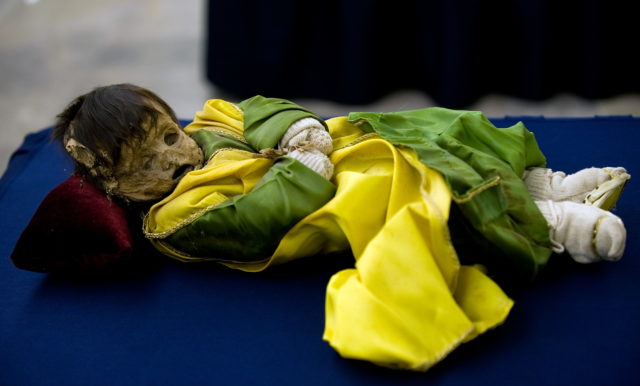 A mummy of a Mexican child, known as Daniel, is seen during a press conference to launch an itinerant exhibit of 36 of the famous Mummies of Guanajuato, in Mexico City, on August 31, 2009. (Photo Credit: LUIS ACOSTA / AFP / Getty Images)

There are a total of 58 mummies on display at El Museo de las Momias, though there are many more in their collection. Among these are two young children dressed in brightly colored clothing, the “Stabbed to death” mummy who has a hole in his abdomen surrounded by the remnants of blood, and the “Drowned” mummy whose skin still shows blue and purple discoloration after his death in the Guanajuato dam.

More from us: This Ancient Roman Emperor was Buried Alive – and His Wife Refused to Save Him!

Although there is a scientific explanation for the mummification of these people, many locals believe that it was divine punishment for sins they may have committed in their lifetime.

« Unexpected Items That Have Been Buried With US Presidents
A Couple Found Rare Coins Worth $850,000 Underneath Their Floorboards »