Why ‘The Judy Garland Show’ Was Canceled After Only One Season

Judy Garland, star of The Wizard of Oz, is best known for her career as a film actress and, later in life, for her extensive musical performances. She starred in many movies when she was a young actress on contract with MGM Studios, often working on more than one production at a time. Garland’s film career continued in her later years.

For a period of time in the 1960s, she was also the host and star of The Judy Garland Show. The variety program had issues from the get-go, including running through multiple producers, fans’ dislike of her co-host, and bad ratings. But many people think it was canceled much too soon, and it remained popular with Judy Garland fans for years.

Judy Garland made it clear that she didn’t want to commit to a weekly TV series, but her opinion changed when she found herself in a bad financial situation in the early 1960s. She was several hundred thousand dollars in debt to the Internal Revenue Service for failure to pay taxes in 1951 and 1952. A TV show would mean good money to start paying off this debt. 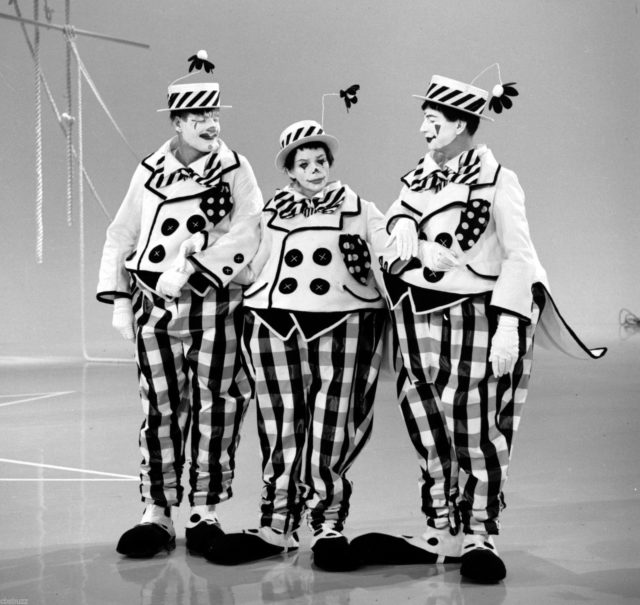 Garland had already worked on a number of TV specials with CBS. Their relationship throughout this period, however, was not good. She was first featured on the Ford Star Jubilee (1955) which was the network’s first color telecast and was extremely successful. This led CBS to sign Garland to a three-year contract for $300,000.

Despite the length of her contract, she was only involved in one more TV special: 1956’s General Electric Theater. Due to disagreements between the network and Garland’s husband and manager at the time, Sid Luft, CBS decided to dissolve the contract. In response, Garland filed a lawsuit for breach of contract as well as libel. CBS countersued. 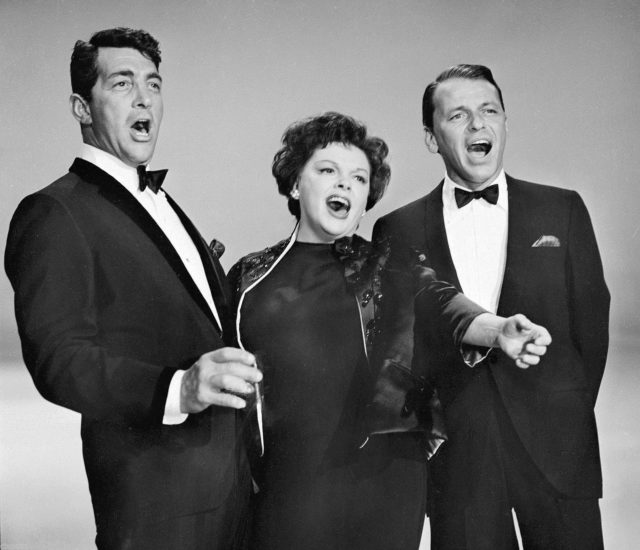 In 1961, the various parties involved in the lawsuit managed to come to an agreement that saw their claims dropped, and Garland signed on for two additional specials with CBS. The first of these episodes had Garland featured as the host of a special with Frank Sinatra and Dean Martin. This episode was nominated for an impressive four Emmys and led to CBS signing Garland on for a regularly scheduled weekly show of the same style.

The contract spanned a four-year period and required Garland to film a total of 26 shows that could be aired weekly. She was to earn over $25,000 per episode, a record amount. The second episode of the show, initially called Judy Garland and Her Guests Phil Silvers and Robert Goulet, had been recorded prior to her more extensive contract with CBS. Instead of being released as a one-off special, it was used as the series pilot and was also nominated for an Emmy.

Many who look back on The Judy Garland Show think that it was doomed from the beginning by poor decisions made by CBS. When the initial special with Sinatra and Martin was released, it was during the nine o’clock spot on Sunday evenings, putting it in direct competition with one of the most popular shows of the time, Bonanza.

Garland’s first special had drastically beat the other show’s numbers, so producers decided to keep the same time slot for the entire series. They presumably thought this was a feat they could accomplish consistently. Now that the two shows were in direct competition, it meant that The Judy Garland Show, which was released in black and white, had to compete with a show released in full color – a difficult task, to say the least.

The series was initially formatted as a variety show, where Garland would tell stories about her career and perform different songs, both individually and with special featured guests. There was a segment called “Tea for Two” where she would sit down and talk with the guest, who was always a surprise to the audience. There were many big-name celebrities who appeared throughout the show’s run, adding to its popularity. 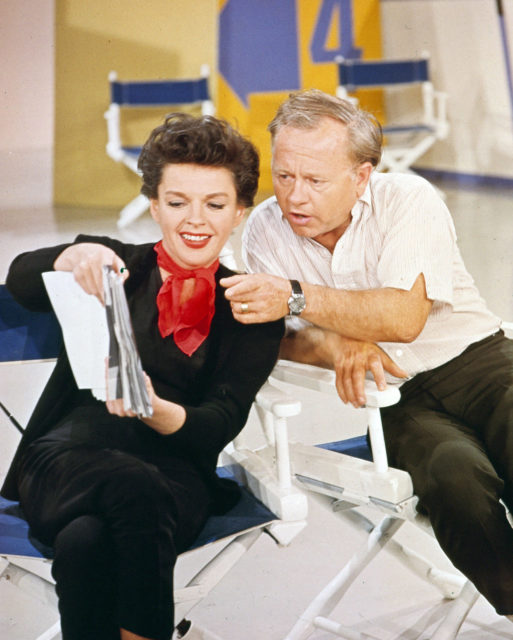 Judy Garland and Mickey Rooney behind the scenes of The Judy Garland show for the tenth episode of the season. (Photo Credit: MoviePics1001 / CBS / MovieStillsDB)

Guests included Garland’s daughter, Liza Minnelli, former co-star Mickey Rooney, Barbra Streisand, Lorna Luft, and Ethel Merman. Along with these guests, the show initially featured Jerry Van Dyke, the brother of Dick Van Dyke, as a series regular and a co-host of sorts. His role was to supply comedy relief with sketches he performed alone or with Garland and the guests.

When the show first aired on September 29, 1963, it was generally well received with critics singing Garland’s praise. Variety said, “If Judy Garland…is of a mind to work every week with the same dedication and zeal that characterized her premiere this week, Bill Paley and his associates should be in clover…Miss Garland was in fine fettle.”

Similar praises were echoed by other reviewers. Criticisms, however, were also numerous. Many reviewers spoke against the variety format of the show, some about the writing, and others directly against Van Dyke. These criticisms led to numerous changes to the show. 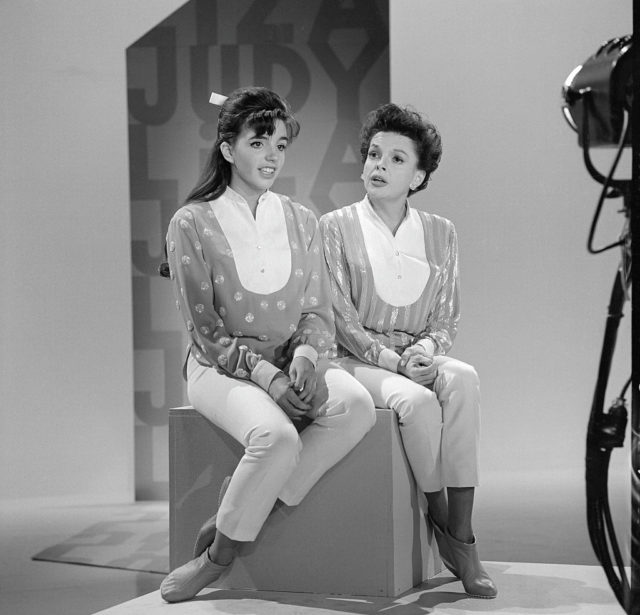 Liza Minnelli with her mother, Judy Garland, as the two rehearse for The Judy Garland Show where the pair sing and dance in a mother-and-daughter act. (Photo Credit: Bettmann / Getty Images)

Van Dyke was fired almost immediately after the first reviews came out, only featuring in episodes that had already been recorded. CBS also swapped directors multiple times, changed the show format, and replaced much of the staff in an effort to make it a success.

By the end of the contracted 26 episodes, the show had completely switched to concert-style episodes where Garland would just perform songs for the duration, occasionally with a guest alongside her. This was generally considered the best of all the formats tried out by CBS, as Garland was the sole part of the show that everyone seemed to like. Critics still spoke highly of her performances, but ratings remained extremely poor. 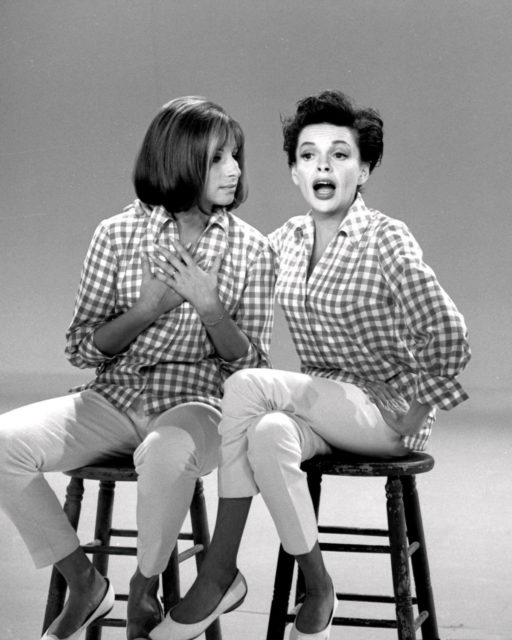 Realizing that the show was doomed, some fans created the “Save The Judy Garland Show Committee,” which tried a letter-writing campaign to keep it on the air. CBS decided that they didn’t want to continue with a second season, and the last episode was aired on March 29, 1964. To its many fans, the show was canceled far too soon.

« Who Discovered America? Columbus Is Only Part of the Story
Diana’s Revenge Dress Had a Powerful Effect on Elizabeth Debicki in Season Five of ‘The Crown’ »