Film fans from all over the world have been sizing up their hands and feet against the stars’ prints in front of Hollywood’s Chinese Theatre for nearly a century, but did you know this world-famous tradition started as an accident? 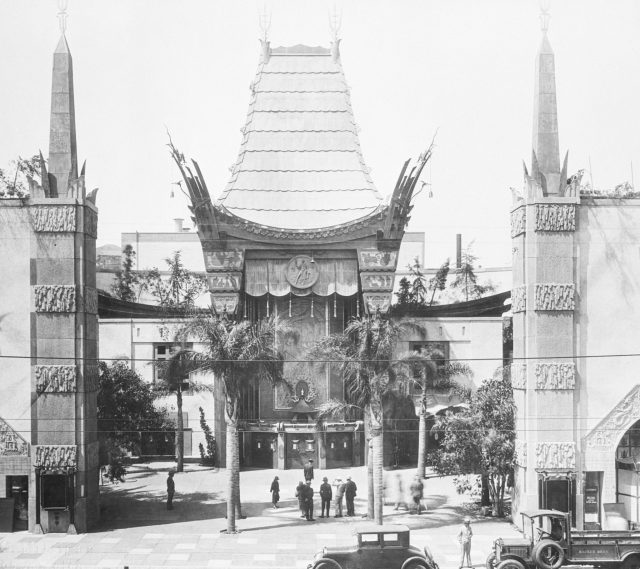 In 1927, silent film star Norma Talmadge visited her friend Sid Grauman at his new Chinese Theatre. This was the last of Grauman’s movie palaces to be built. In 1918, Grauman’s Million Dollar Theatre opened, followed by his Egyptian Theatre in 1922.

Grauman’s Chinese Theatre was under construction when Talmadge was visiting Grauman in 1927. Upon her arrival, Talmadge accidentally stepped in wet cement.

Talmadge’s footprints solidifying in the wet cement gave Grauman the idea of creating his own unique hall of fame of the stars in front of the Theatre. 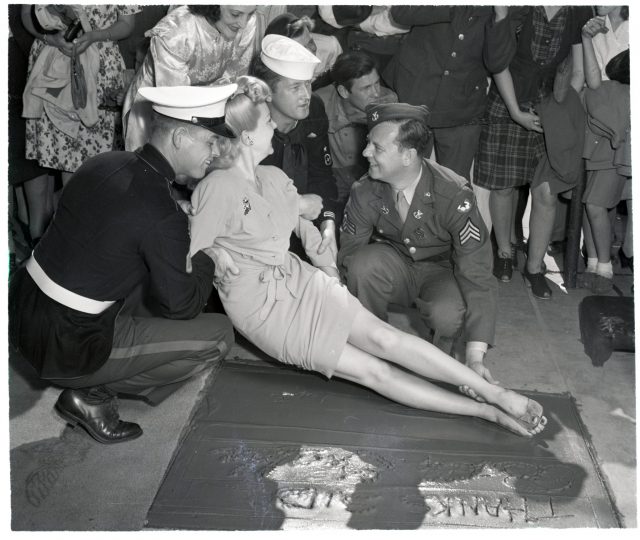 Grauman asked his business partners and friends Douglas Fairbanks and Mary Pickford to intentionally put their hands and feet into the wet cement. He then grabbed a nail and they all signed their names next to their footprints.

These original cement slabs with Norma Talmadge’s, Douglas Fairbanks’s, and Mary Pickford’s footprints stayed in the sidewalk until 1958.

Today, celebrity footprints and handprints in front of the theatre draw over five million tourists a year. Even those who claim they’re not star-struck end up sticking their hands and feet in these prints and snapping a quick picture. The tradition hasn’t changed since 1927. 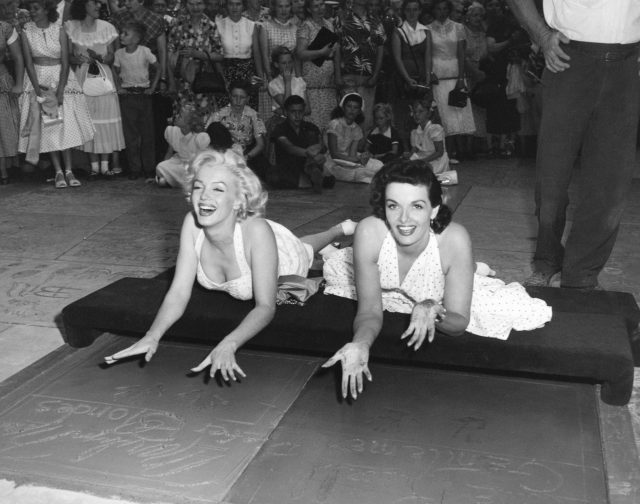 When actresses Marilyn Monroe and Jane Russell put their prints in cement in 1953, they wrote “Gentlemen prefer blondes!” across the top of both of their squares to promote their upcoming movie with the same title. Monroe also dotted the “I” in her first name with a rhinestone from her earring, which was sadly later chiseled out by a tourist. Her handprints and footprints are the most popular set with tourists. 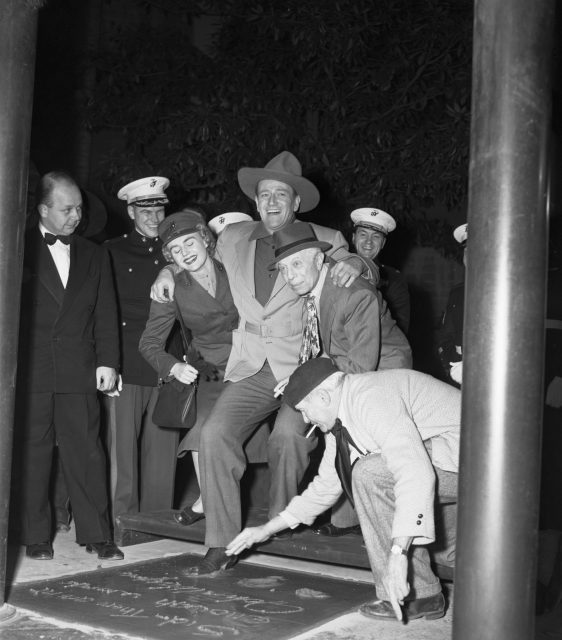 Stars often don’t put just their hands and feet into the cement. John Wayne decided that he was going to fist bump the cement instead of putting his normal handprints. 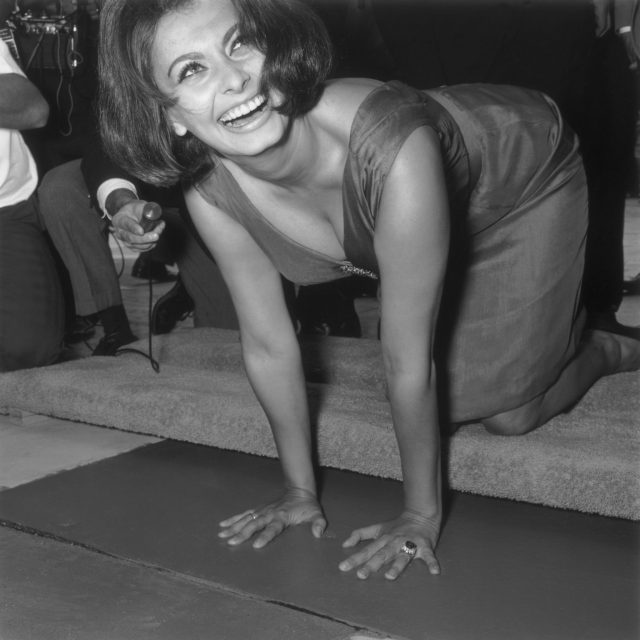 When Rita Hayworth was inducted in 1942, she wore children’s shoes for her footprint. This is because smaller feet were considered to be more ladylike in the 1940s so she wanted her tiny feet to be immortalized. 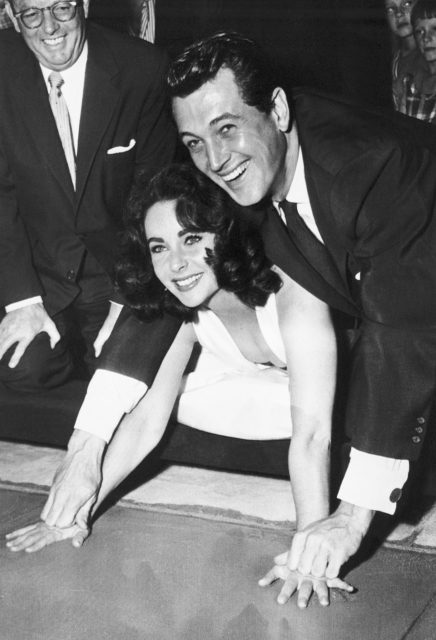 Actress Elizabeth Taylor gets an assist from actor Rock Hudson as she plants her hands in cement in the lobby of Grauman’s Chinese Theatre, September 1956. (Photo Credit: Bettmann/ Getty Images)

Always the funny guy! When Mel Brooks was inducted in 2014, he decided to wear a prosthetic sixth finger on his left hand, giving his handprint the appearance of an extra finger. 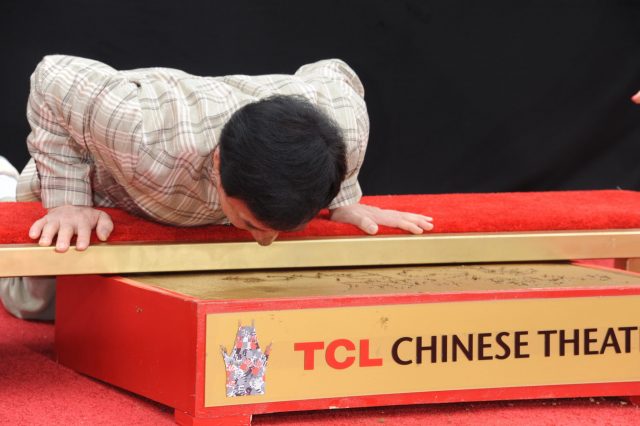 Jackie Chan followed in the footsteps of Jimmy Durante when he was inducted in 1997. Both stars pressed their noses into the cement half a century apart from each other. 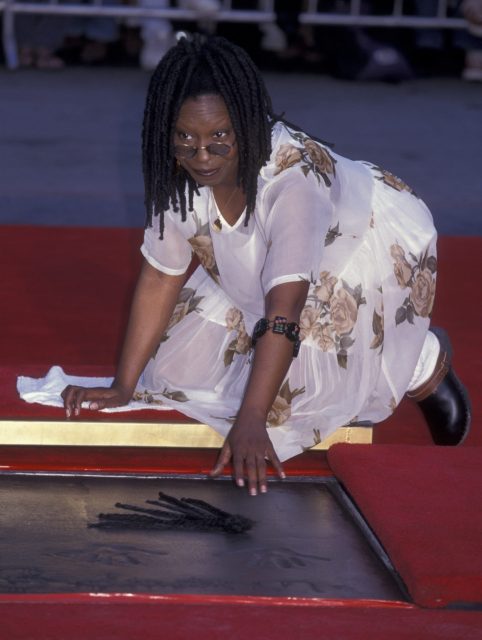 When actress and comedian Whoopi Goldberg was inducted in 1995, she dropped one of her dreadlocks into the cement. 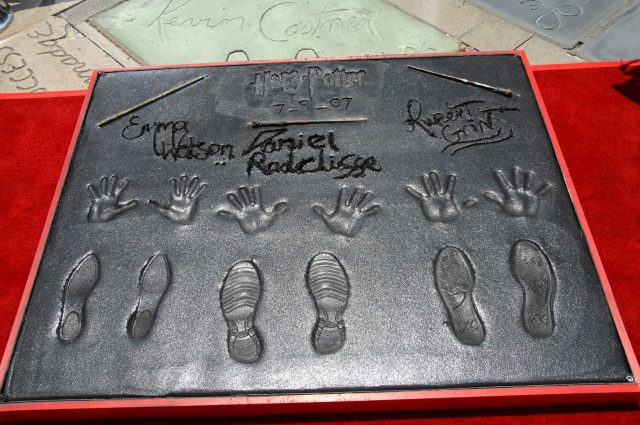 More from us: The Puzzling Story Of Marilyn Monroe’s Missing Wedding Ring

And when Emma Watson, Daniel Radcliffe, and Rupert Grint were honored in 2007, they decided to leave an imprint of the wands they used while filming the Harry Potter franchise.

« Keanu Reeves Made a 1980s Christmas Musical: You May Need The Red Pill After Seeing It
Secret Service Agent Provides an Intimate Look Into the JFK Assassination »