Movie sequels usually give us more of the same… but not Batman Returns! This follow-up was very different, becoming one of the most controversial blockbusters in history.

After the success of Batman, co-writer Sam Hamm came up with some ideas for the second film. Kim Basinger’s Vicki Vale was to return. And while Penguin and Catwoman were in place as villains, their plan in “Batman II” was a little… let’s say old-fashioned.

Reviewing Hamm’s treatment, Den of Geek notes a “rather lackluster main plotline” where the big bads are bagging statues and apparently killing their well-to-do owners. The action culminates in an “Agatha Christie-esque visit to Wayne Manor,” where the statues can be used to locate buried treasure. Or something. 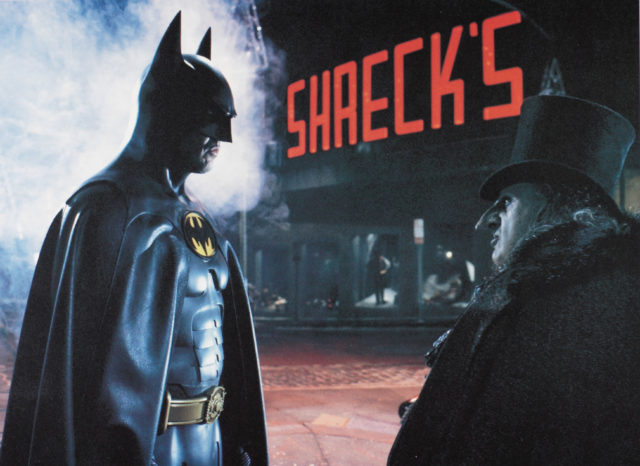 Batman and the Penguin in a scene from the film (Photo Credit: Warner Bros. / MovieStillsDB)

Why is the movie so different?

Burton was drawn back by the prospect of having more creative control. Keaton reportedly wanted the movie to be a standalone story. Seems neither of them saw Batman as a long-term thing. In a move unthinkable today, the studio – Warner Bros. – hadn’t tied them into a multi-picture deal.

The project was clearly a license to print dollars. Metro mentions Keaton’s comments on Marc Maron’s podcast, where he “claimed he only took the role as he needed money at the time for a real-estate deal.” 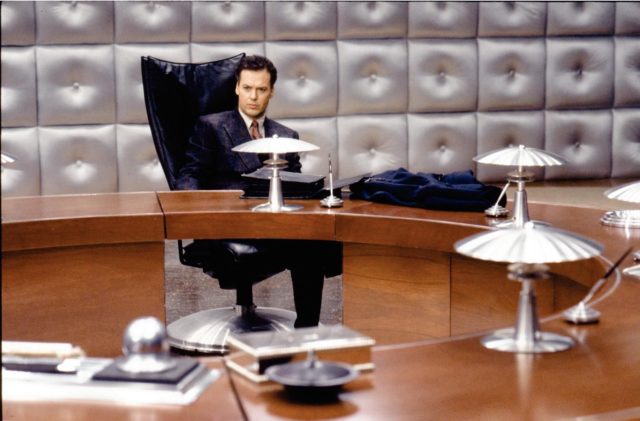 DeVito wasn’t the first choice for the role of Penguin but it was a character he was probably born to play. The star famously stayed in character during shooting. And Oswald Cobblepot/Penguin made his presence felt.

Extra ick was added with the use of black gunk that would drip from the villain’s mouth. DeVito blended mouthwash and food coloring to gross out viewers. “We had it in a jar with a nozzle on it. Before every scene, I’d squirt it into my mouth” he told The Hollywood Reporter. 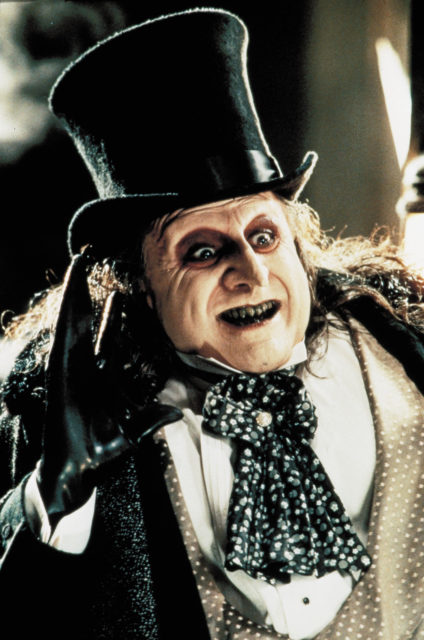 So who else was in the frame for Penguin? Quite a few big names. Dustin Hoffman was reportedly approached first. Talents as diverse as John Candy, Christopher Lloyd and Ray Liotta were on the list.

But the most surprising casting idea was Dean Martin! Might Cobblepot have crooned as he waddled around the sewers of Gotham? Either way, the Rat Packer would have looked immaculate. 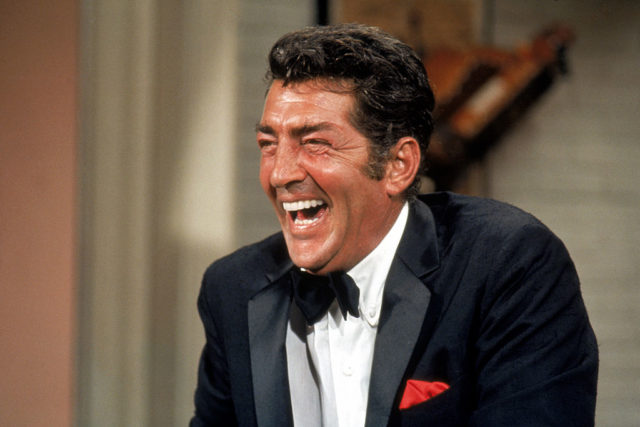 Dean Martin during the taping of The Dean Martin Variety Show circa 1967 in Hollywood, California. (Photo Credit: Martin Mills/Getty Images)

The movie was a merchandising nightmare

With its German Expressionist aesthetic and adversaries that were both monstrous and kinky, Batman Returns proved a tough sell for marketers.

Kenner’s Penguin action figure didn’t resemble Danny DeVito at all. It was actually a traditional toy with a new paint job. Companies didn’t want to traumatize tots. Especially in a story where the villain wants to drown babies! The black gunk was a major sticking point also, so to speak.

Happy Meals based on one of Hollywood’s bleakest blockbusters? You’d have needed a ton of Smilex gas to get those ad execs grinning. 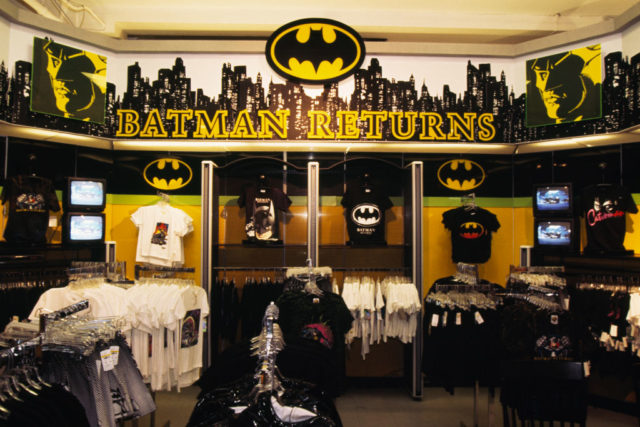 As noted on IMDB, the film featured a LOT of penguins. Burton and co used a mix of animatronics, CGI, real animals and men in suits to bring Cobblepot’s army to life.

Thirty African penguins and 12 King penguins were “employed” for the shoot. The Kings came from the Cotswolds in England. It may have looked like an animal rights disaster zone, with the birds tooled up and ready to blast off.  However, the visitors apparently received movie star treatment.

Meanwhile, another feathered friend had a warm welcome of an unexpected kind. The effects team figured a small puppet would be good for the sequence where Catwoman bungs a bird in her mouth. It didn’t work, so the actress held the real thing on her tongue instead. 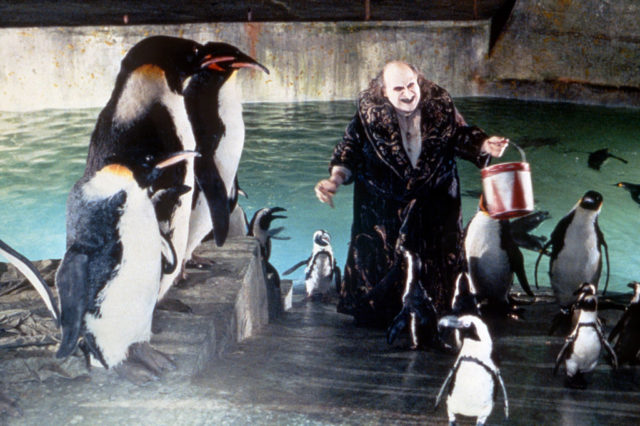 Catwoman nearly got her own film

Selina Kyle/Catwoman survived till the end of the movie, as the $250,000 final shot shows. Why didn’t she come back for Batman Forever? Because a Michelle Pfeiffer solo movie was in the offing, again scripted by Waters.

Burton wanted to direct, though Pfeiffer would be replaced by Ashley Judd and finally Halle Berry for the film that eventually emerged. By this stage, Burton and Waters were out, though producer Denise Di Novi remained for a much-derided effort.

Michelle Pfeiffer could only perform as Catwoman in short bursts

The Catwoman costume was clearly a tight fit. Rather too tight for Pfeiffer, who could only manage short stints in character before having to be unstitched for some oxygen.

She went on an apples and water diet in order to be vacuumed in, though that didn’t mean the outfit escaped wear and tear. Sixty were produced at least, costing $1,000 apiece. 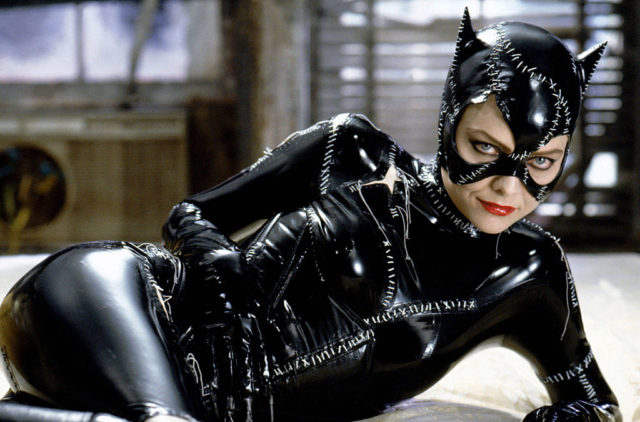 Annette Bening was cast as Catwoman before her pregnancy by Warren Beatty took her elsewhere. Susan Sarandon, Jodie Foster, Jennifer Jason Leigh and Bridget Fonda were also talked about, among others.

Pfeiffer made the role her own. Though another candidate went all out to be considered. Sean Young had lost the role of Vicki Vale in Batman after a riding accident. She wanted another stab at Gotham City as Selina Kyle, so famously turned up unannounced in costume.

David Bowie was approached for the role of dastardly business brain Max Schreck. He went to Twin Peaks instead. Christopher Walken became Schreck, though Burton had to overcome his fear of Walken first!

This wasn’t the first time Walken had taken a part intended for the Thin White Duke. A few years earlier, he was cast as Max Zorin in the Bond movie A View To A Kill when Bowie didn’t bite. 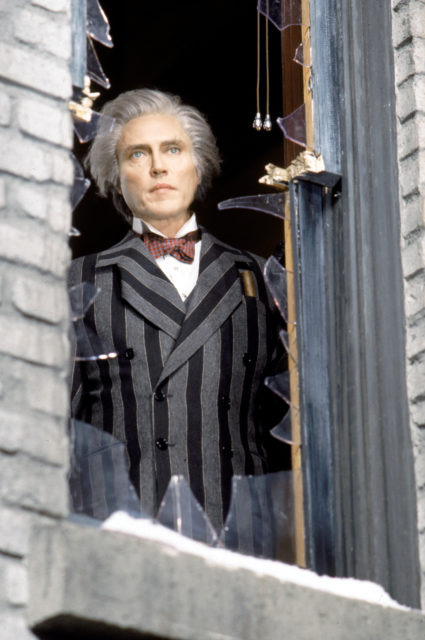 Some stars of the Batman TV series weren’t too thrilled about Burton’s darker take on the franchise. Yet original Penguin Burgess Meredith was on board to play Oswald Cobblepot’s father in the striking pre-credits sequence. Sadly, he was too poorly to perform the role. 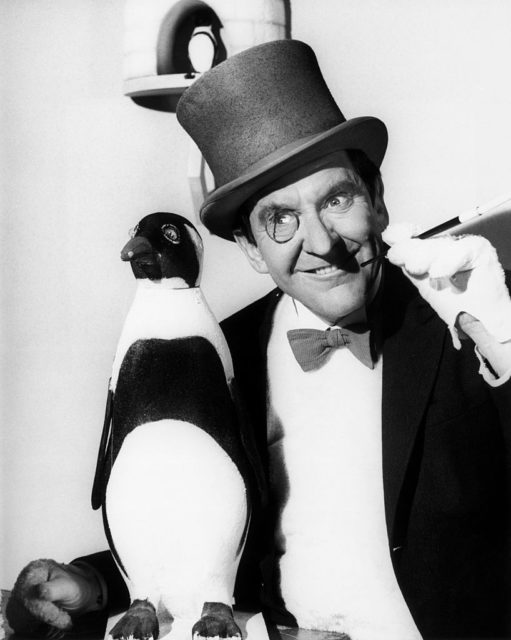 From Batarangs to Batarelief. Keaton squeezed back into the suit but made sure a convenient zip was put in first. No wonder Batman looked so tense in the first movie.

Just because you’re in a Batman movie, doesn’t mean you don’t make serious money from it. Marlon Wayans was cast as Robin the Boy Wonder but the character was dropped. He still got paid for his contribution. 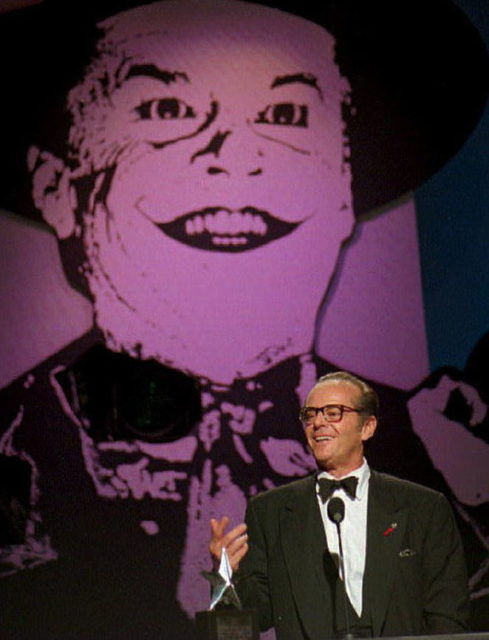 Jack Nicholson addresses the audience after receiving the American Film Institute Life Achievement award 03 March 1995 at the Beverly Hotel in Beverly Hills. The poster behind him, pictures Nicholson as The Jocker, a role he played in the movie “Batman”. The event celebrated the 35-year career of the Oscar winning actor. (Photo Credit: POOL/AFP via Getty Images)

More from us: Holy Franchise Killer! Facts About ‘Batman and Robin’ at 25

The ace in the pack was surely the Joker. Jack Nicholson’s deal encompassed a share of the profit from sequels, even though he died onscreen. He reportedly made a fortune without lifting a finger (or an acid-squirting flower).