In early 2022, the family of actor Bruce Willis announced his retirement, after sharing that he has been diagnosed with aphasia. Aphasia is a disease that can affect one’s ability to speak, write, and understand language – both verbal and written. To honor Willis’s illustrious career, which has spanned four decades, we thought we would take a look back at our favorite Bruce Willis movie and television roles. (Warning – spoilers ahead!) 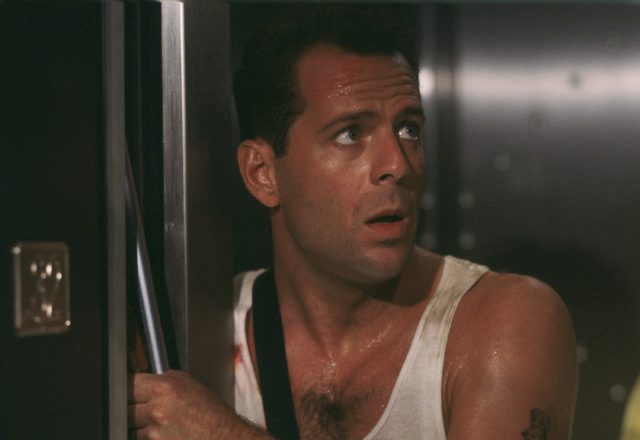 Once again we will ask the age-old question: Is Die Hard a Christmas movie? We say no because we love to watch Die Hard all year long! This is arguably Bruce Willis’s most famous movie. Willis plays NYPD police officer, John McClane, who goes on a trip to visit his wife and children in Los Angeles.

During a Christmas party at his wife’s workplace, several people, including his wife, are taken hostage. John McClane quickly realizes that he is the group’s only hope. What is so great about the film is that John McClane is relatable. He is a vulnerable and sometimes error-prone hero. 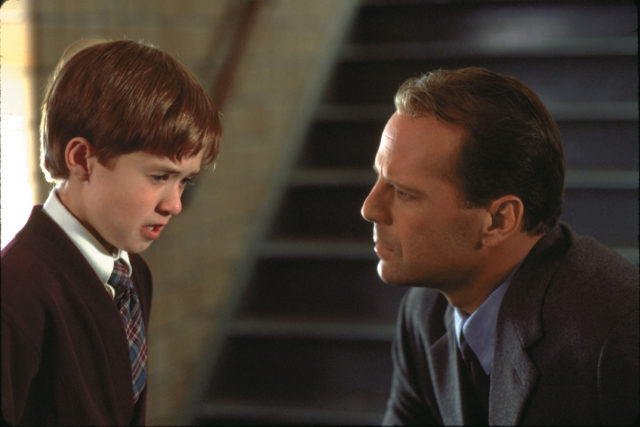 We will never truly get over the plot twist involving Bruce Willis’s character in The Sixth Sense. This 1999 horror/ thriller movie focuses on a child psychologist named Malcolm Crowe (played by Willis) who is trying to help his young patient, a 9-year-old boy named Cole (Haley Joel Osment) who claims he can see dead people.

Cole tells Malcolm Crowe that the people he sees do not realize they are dead. Because of his “sixth sense,” Cole is picked on at school. At first, Malcolm is skeptical of Cole and thinks the poor boy has some serious mental health issues. However, after spending more time with him, Malcolm realizes that his patient may actually have the ability to communicate with those beyond the grave.

The Sixth Sense was an international sensation. It was nominated for six Academy Awards, including Best Supporting Actor for Haley Joel Osment, making him the second-youngest performer to ever receive an Academy nomination for a supporting role. 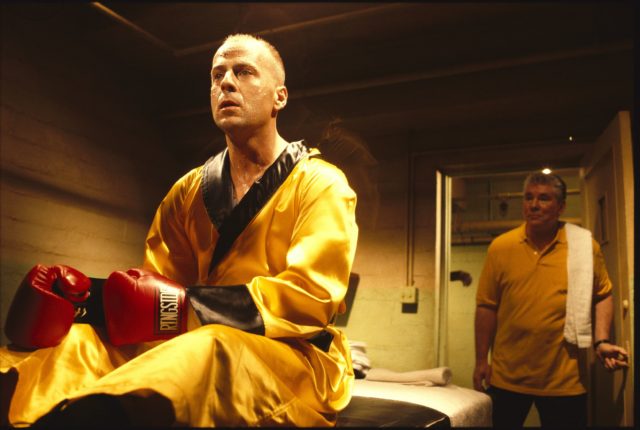 He might not be the leading man in Pulp Fiction, but Bruce Willis still deserves a major shoutout for his role as boxer Butch Coolidge. Pulp Fiction weaves interlocking stories of crime in the Los Angeles underworld in the 1990s. Butch Coolidge is an aging actor who double-crosses crime boss, Marsellus Wallace (Ving Rhames).

Willis was already a name when he scored this role in Pulp Fiction. Director Quentin Tarantino later said that Bruce Willis made Pulp Fiction “legit,” even though he wasn’t in a starring role. 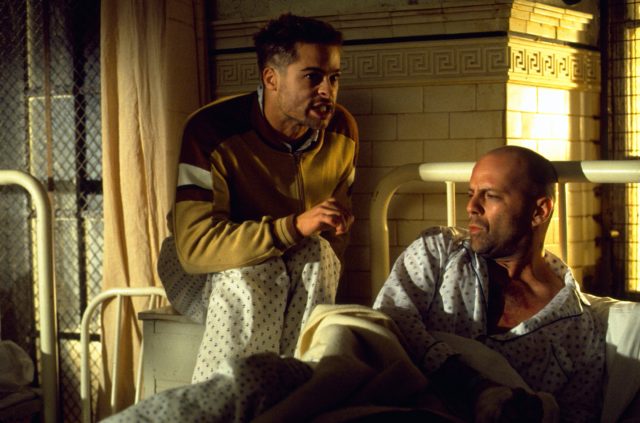 12 Monkeys is a sci-fi film starring Bruce Willis and Brad Pitt. In 1996, an unknown virus wiped out five billion people worldwide. By 2035, the remaining population was forced to live underground. Willis plays convict James Cole, who agrees to go back to 1990 to earn his parole in 2035.

When he is back in 1990, James is put into a psychiatric facility because no one believes his warnings. At this facility, he meets psychiatrist Dr. Kathryn Railly (Madeleine Stowe) and patient Jeffrey Goines (played by Pitt). In 1996, James kidnaps Dr. Railly to have her help with his mission to find the activist group, the 12 Monkeys, who are planning on releasing the lethal virus into unknown cities. 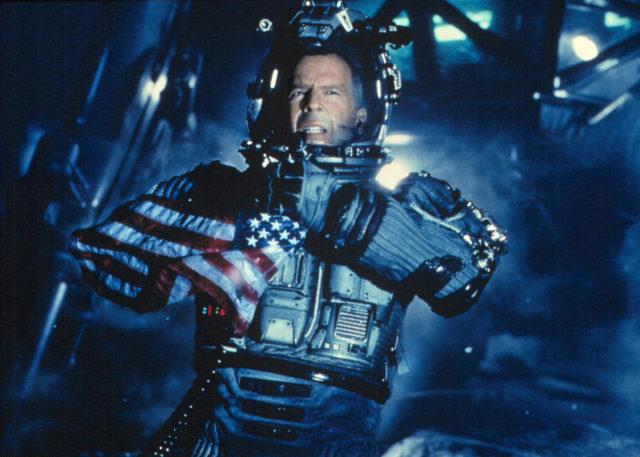 Because of Armageddon, we have Aerosmith’s smash hit “I Don’t Want to Miss a Thing.” In this movie, NASA discovers that a huge asteroid is about to collide with Earth in less than a month.

Willis plays expert driller Harry Stamper, who is recruited by NASA to teach astronauts how to drill into the asteroid. He shows what it is to be a man on a mission while still being a protective father in this role. 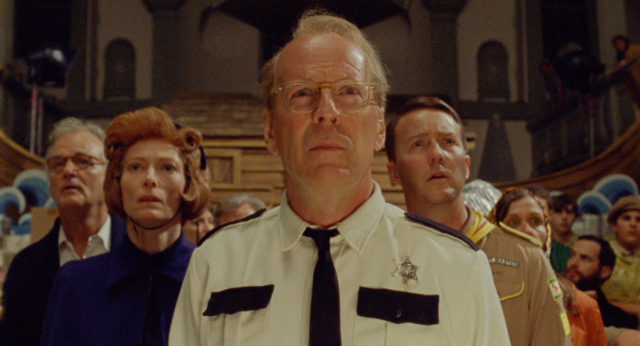 This might be a more recent movie, but Bruce Willis proves he still has it as he delivers a truly heartwarming performance as Captain Sharp. The year is 1965 when two twelve-year-olds from the island town of New Penzance fall in love and decide to run away. However, a terrible storm is fast approaching which forces a group of adults to band together to find the two lovebirds.

Willis plays a loveable police captain heading the search for the two missing children. Throughout the movie, Captain Sharp seems to be one of the only grown-ups who truly cares about the children’s well-being and overall happiness. 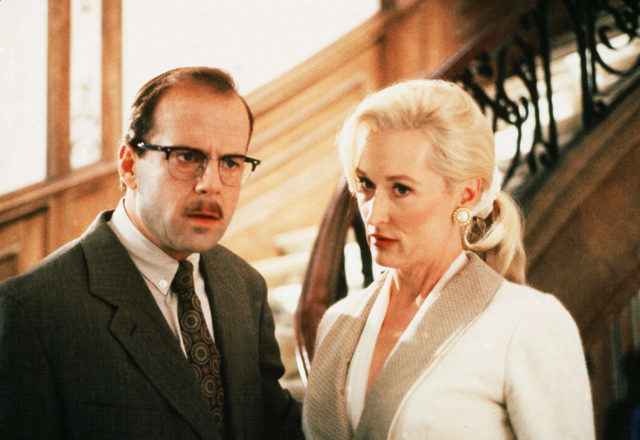 Three legends starred in the 1992 satirical comedy: Meryl Streep, Goldie Hawn, and Bruce Willis. Meryl Streep and Goldie Hawn are rivals both fighting for the affection of Bruce Willis’s character. The women decide to drink a magic potion that promises eternal youth and beauty – though it does cause unpleasant side effects.

The movie has since acquired a cult following, especially in the LGBTQ+ community. 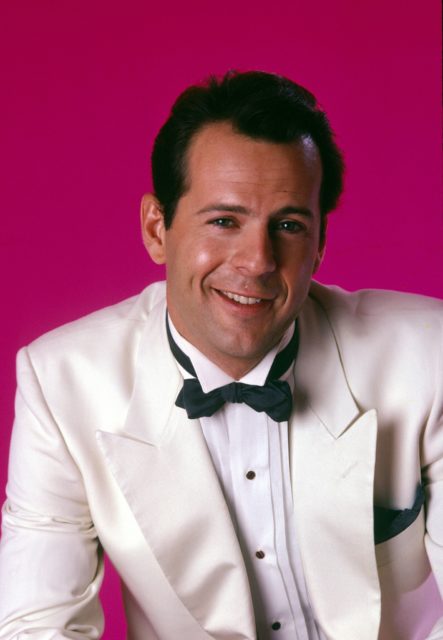 Yes, Moonlighting is a television show, but this list wouldn’t be complete without giving his role as David Addison Jr. a shoutout. Willis won his first Emmy for playing the detective running the City of Angels Detective Agency. Moonlighting is considered to be one of the first successful examples of a comedy-drama television series.

Similarly, David Addison Jr.’s relationship with Maddie Hayes (Cybill Shepherd) is considered one of the best TV couplings of all time. 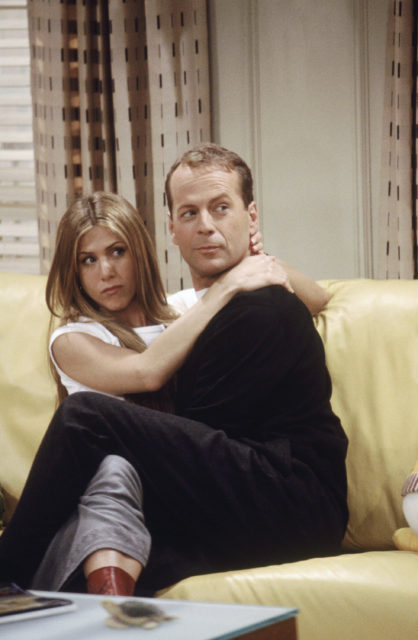 Absolutely no list of Bruce Willis’s greatest acting roles is complete without mentioning his time on Friends. A number of different stars had guest roles on the famous sitcom, but none were more iconic than Willis. He made his appearance on the sitcom in season 6. He portrayed Paul Stevens, the overprotective father of Elizabeth. Elizabeth was the much younger girlfriend of Ross (David Schwimmer), who was also her teacher.

Willis’s cameo was the result of losing a bet. In the spring of 2000, Willis and Matthew Perry (who played Chandler Bing) co-starred in the movie The Whole Nine Yards.  Perry believed that the movie would do well at the box office when it was released, while Willis thought it would tank.

More from us: Die Hard’s Christmas Setting Is More Complex Than You Might Think

The two decided to make a bet. If the movie opened at number one at the box office, then Willis would have to appear on Friends for free. Of course, the movie held the number one spot at the box office for multiple weeks which resulted in the guest spot on Friends. The experience must not have been so bad though, because Willis won an Emmy for Outstanding Guest Actor in a Comedy Series for the gig.