John F. Kennedy is remembered for many things – his assassination, his role in the Cuban Missile Crisis, and even his alleged affair with Marilyn Monroe. It’s easy to forget that President Kennedy also served in the United States Navy. JFK never forgot this, though. In fact, he kept a coconut as a paperweight on his desk in the Oval Office to remind him of his service. 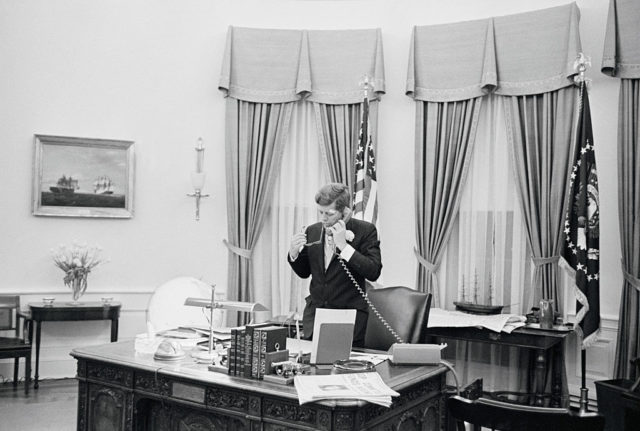 President John F. Kennedy stands behind his desk in the Oval Office as he talks on the telephone.(Photo Credit: Bettmann/ Getty Images)

JFK’s older brother, Joseph Kennedy Jr., joined the Navy and trained to be a pilot. JFK also wanted to join the Navy but worried they wouldn’t accept him due to his chronic back issues. JFK’s father, Joseph Kennedy Sr., was the U.S. ambassador to Great Britain. He used his connection to Captain Alan Kirk, the Director of Naval Intelligence, to get JFK into the Navy.

JFK was initially assigned as an ensign in the Naval Reserves serving in intelligence. In the summer of 1942, Kennedy attended the Naval Reserve Officer Training School at Northwestern University and then voluntarily entered the Motor Torpedo Boat Squadrons Training Center in Rhode Island. In October 1942, JFK was promoted to lieutenant junior grade. 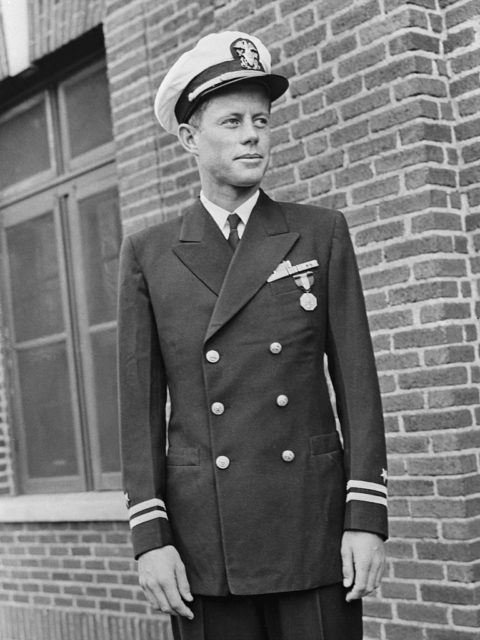 In April 1943, JFK was assigned to Motor Torpedo Squadron Two and took command of PT-109. PT-109 was a Torpedo Patrol Boat (PT Boat) located in the Solomon Islands. While in command of the PT-109, Kennedy led 30 successful missions before disaster struck on August 2, 1943.

A Japanese naval destroyer struck Kennedy’s boat during a night patrol mission. Two sailors were killed on impact, but the surviving ten crew members were able to grab onto floating pieces of the wreckage. However, they were stranded in the middle of the open ocean. 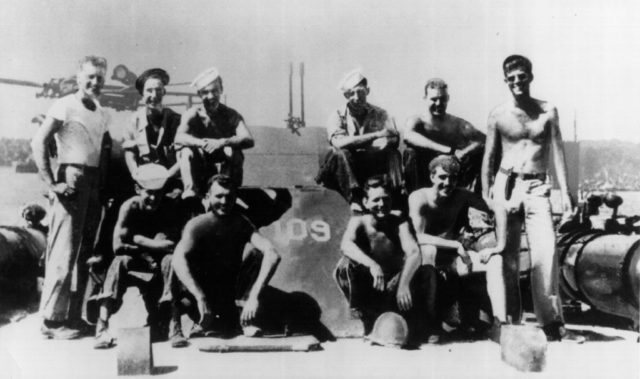 President John F. Kennedy served as a U.S. Navy lieutenant and commander of a patrol torpedo (PT) boat during World War II. Kennedy is shown at the extreme right with members of his crew at a South Pacific Naval Base. (Photo Credit: National Archive/ Getty Images)

As dawn broke, the survivors spotted the outline of a tiny island on the horizon. Kennedy, who was a competitive swimmer, led his crew to the island. He swam more than three miles to the island while towing an injured crewmate by holding the strap of his lifejacket in his teeth.

Unfortunately, there was nothing of nourishment on this first island. Kennedy volunteered to go back out into the ocean and attempt to find another island that could provide his crew with food and water. Kennedy eventually found an island with coconut palm trees. After four days without any food or water, Kennedy led his crew to a new island where they found shade, ate coconut meat, and drank coconut milk.

The most famous coconut in history 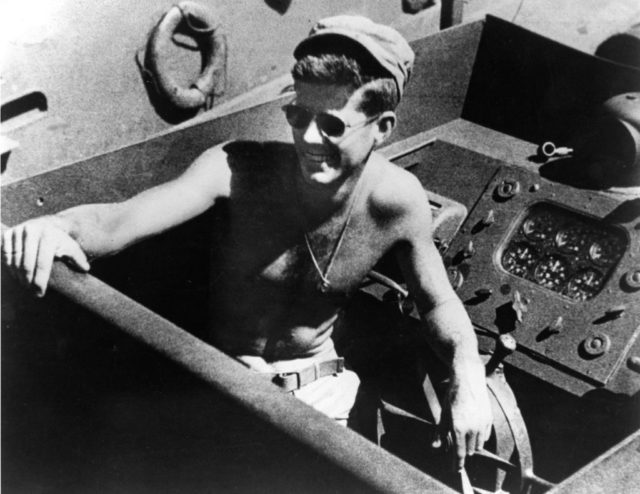 Kennedy and his crew needed to be extremely careful because Japanese patrols and secret outposts could be anywhere. On August 5, Solomon Islanders Eroni Kumana and Biuku Gasa came across Kennedy and his colleague George Ross as they had set out searching for food and water. Kumana and Gasa worked with the Coastwatchers, a network of agents based on the Pacific islands during the War. The Coastwatchers kept an eye on the enemy and reported movement back to Allied forces.

At first, Kumana and Gasa were frightened of Kennedy and Ross as they thought they were Japanese. Fortunately, the two Coastwatchers then came across the rest of the crew of the PT-109 who told them they were American. 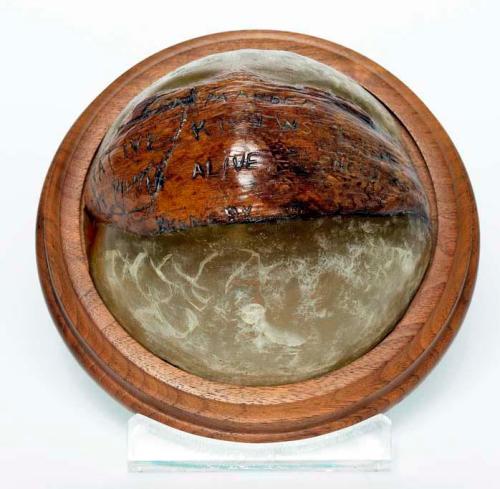 Kennedy knew he needed to get a message back to the American base to organize a rescue so he wrote a message on a coconut that he gave to Kumana and Gasa. The message read: NUARO ISL COMMANDER/ NATIVE KNOWS POSIT/ HE CAN PILOT/ 11 ALIVE NEED SMALL BOAT/ KENNEDY. With great risk, Kumana and Gasa took the coconut into their canoe and paddled to their destination island 35 miles away, where an Australian Coastwatcher was stationed. 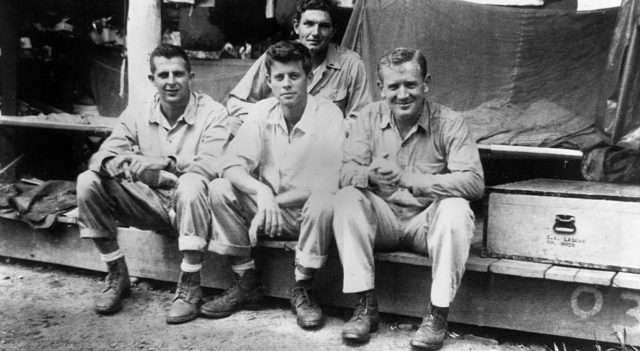 It was extremely dangerous for Kumana and Gasa to be carrying this coconut with them as they chartered through the Pacific Ocean.  The Japanese were known to use the locals as ‘target practice.’ If they had been caught with the coconut, it would have been an immediate death sentence. In fact, Kennedy warned the pair to scratch out the message on the coconut if they were caught by the Japanese.

Luckily, Eroni Kumana and Biuku Gasa made it safely to their destination and were able to bring back help for the stranded crew of PT-109. Although Kennedy didn’t keep the coconut with his message on it, the coconut somehow made its way back to Kennedy in the years following this event. He then had it encased in resin and placed it on his desk in the Oval Office during his presidency. The original coconut is now on display at the John F. Kennedy Presidential Library and Museum in Boston, Massachusetts.

Aftermath of the disaster 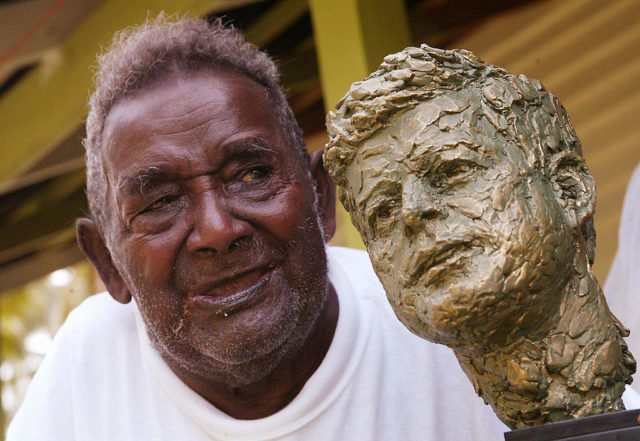 Biuku Gasa, age 80, proudly displays the bronze bust of John F. Kennedy which was presented to him by the Kennedy family for rescuing JFK at his home on Kauvi Island in Vona Vona Lagoon in the remote Western Province of the Solomon Islands, 28 July 2003. (Photo Credit: TORSTEN BLACKWOOD/ Getty Images)

This incident had lasting effects on John F. Kennedy. After this event, Kennedy was deemed a war hero. He was awarded the Navy and Marine Corps Medal and the Purple Heart for his efforts in the Pacific. Many historians believe that his status as a war hero helped him during his presidential run.

Kennedy also kept in touch with both Kumana and Gasa over the years through letters. Both men were invited to come to his inauguration, although local politics prevented either from going. Although Kumana and Gasa never reunited with JFK, they later met JFK’s nephew, Max Kennedy. Max is the son of Robert Kennedy, who traveled to the Solomon Islands in 2002.

More from us: The Tragic Life of JFK’s Little Sister, Rosemary Kennedy

The incident also had a lasting physical impact on Kennedy. His already painful back problem became even worse after this ordeal. He would undergo four spinal surgeries between 1944 and 1957 and was in constant pain for the rest of his life.