Professor Takes to Twitter to Correct Historic Misconceptions About Breastfeeding

Throughout the spring of 2022, parents in the United States scrambled to find baby formula to feed their children during a shortage that has re-ignited the debate over breastfeeding and formula. Over 40% of infant formula was out of stock across the country, triggering President Joe Biden to invoke the Defense Production Act to quickly address the shortage.

According to experts, while about 80% of infants are breastfed at birth, that number drops to less than 20% after three months as many parents choose to include formula for better nutrition, convenience, or health reasons. 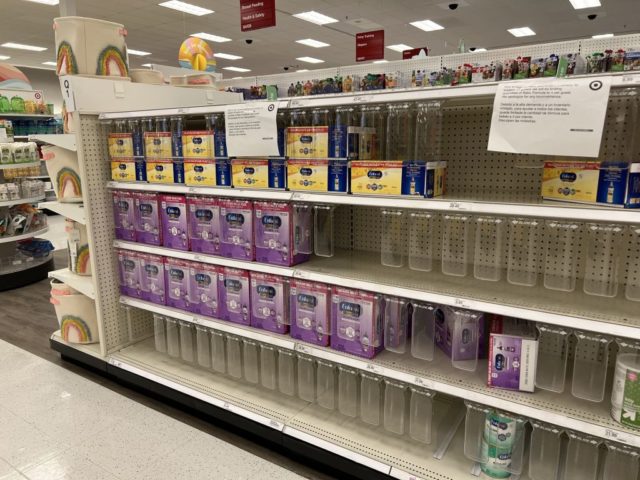 While many on social media tried to point out the historic differences between infant feeding practices throughout history and how they could apply to parents during the formula shortage, one historian took to Twitter to set the record straight.

Exclusively breastfeeding has never been the only option

You may be hearing the argument that before the rise of modern commercial infant formula, babies all ate breastmilk and everything was great. As a historian of infant feeding, let me tell you why that’s not true.

According to Dr. Carla Cevasco, a Rutgers School of Arts and Sciences professor, people have historically turned to foods other than breastmilk to feed their children. Having children in the “olden days” was nothing like today’s medicated hospital births.

Over the last two millennia, the average rate of infant deaths around the world was 26.9%. As of 2017, that number is just 2.9% – thanks to modern medicine, infrastructure, and better education for new parents about birth and taking care of their little ones. Many parents were forced to turn to alternative ways of feeding their babies due to health conditions like a higher chance of the mother dying in childbirth or soon after. 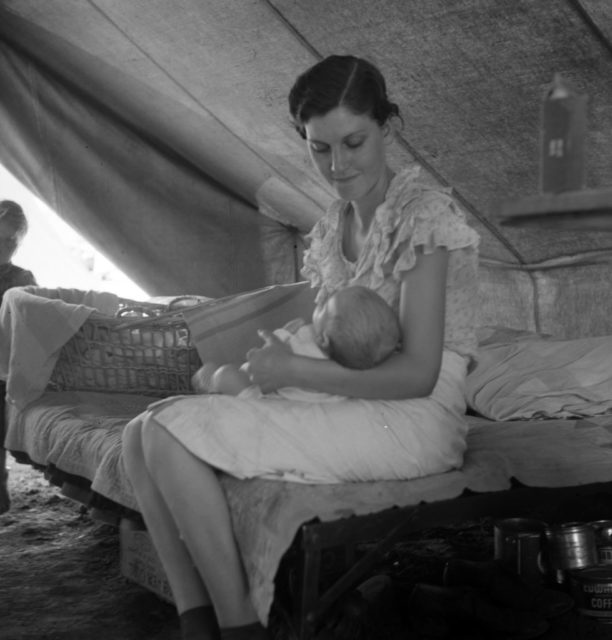 Young migrant mother with six weeks old baby born in a hospital with aid of Farm Security Administration (FSA) medical and association for migratory workers. She lives in a labour contractors camp near Westley, California. ‘I try to keep him eatin’ and sleepin’ regular like I got him out of the hospital.’ by Dorothea Lange 1895-1965, dated 1938. (Photo Credit: Photo 12/Universal Images Group via Getty Images)

According to Cevasco, mothers could be unable to breastfeed because of “death in childbirth, or physical/mental health concerns, or need to return to work outside the home right after childbirth… OR their partner or enslaver forced them not to breastfeed so that they could return to fertility ASAP after giving birth.”

The dangers of “DIY formula”

Sometimes the birthing parent was in perfect health but the baby was unable to breastfeed due to a host of reasons like cleft palate or poor latch. If parents have historically turned to other ways of feeding their infants in the days before the convenience of formula, then what exactly were they feeding them? 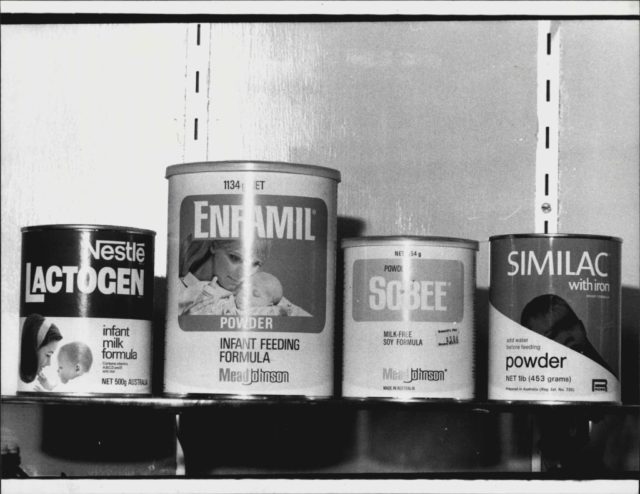 Cevasco writes that, “Sometimes babies thrived on alternative diets. Wabanaki women in the 18th century sometimes fed infants a mixture of boiled walnuts, cornmeal, and water; an English colonist, Elizabeth Hanson, reported that her baby thrived on this diet.” Supposedly, other infants were fed watered-down animal milk mixed with flour or breadcrumbs.

These alternatives came with many risks, especially the possibility of bacterial infections, malnutrition, and even death. It wasn’t until formula as we know it was introduced in the 1950s that the risks associated with alternative ways of feeding infants were drastically reduced. Yet today, formula is often believed to be less nutritious, “unnatural,” or even lazy – but Cevasco put all these misconceptions to bed:

“Let’s not demonize formula because of an imagined past in which everyone breastfed. In the ACTUAL past, babies… starved and died of disease. Babies who would have survived today, because they would have had access to safe, nutritionally complete formula.”

Unfortunately, the shortage has also forced parents to turn to the dangerous DIY formula techniques of the past. Dr. Rebecca Romero of the Nationwide Children’s Hospital in Ohio has shared that she has seen a disturbing “increase in families preparing homemade formula or mixing foods not intended for infants with formula, which can be very risky and compromise the developing infant’s health.”

More from us: Baby Window Cages And 14 Other Bizarre Inventions From The Past

Understanding the history of formula and alternative methods of infant feeding has truly put into perspective how devastating the 2022 formula shortage has been to parents. As Cevasco put it, “let’s all agree that babies not going hungry should be the MAIN GOAL here.” In May of 2022, the US government submitted legislation that would provide the FDA with $28 million to address the formula shortage.