The Flip of a Switch Saved the Apollo 12 Mission

On November 14, 1969, NASA launched its second Apollo mission to land people on the moon. Taking off less than four months after the Apollo 11 crew became the first humans to walk on the lunar surface, the primary goal of Apollo 12 was to continue exploring the moon in preparation for future exploration. There were three crew members on this mission: Charles “Pete” Conrad Jr., Richard F. Gordon Jr., and Alan L. Bean.

At first, the launch seemed perfect, but less than a minute into the mission, chaos ensued. What stopped the launch from being aborted? Why, it was simply the flick of a switch.

A good day for lift-off 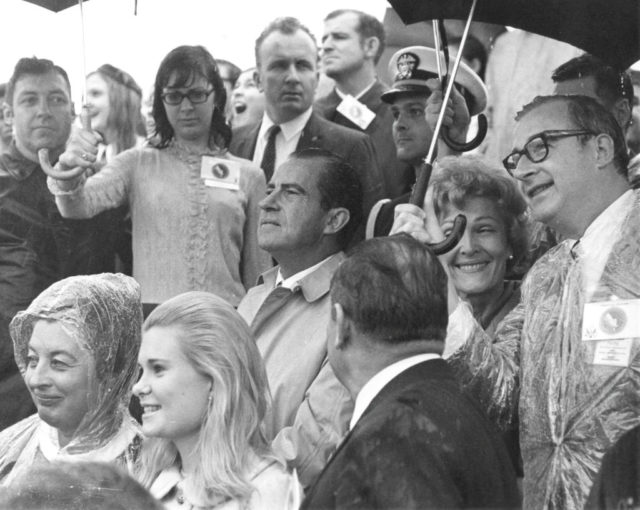 On November 13, 1969, Florida was experiencing rain. This rain continued into the night, but by the morning of the 14th, had appeared to have cleared enough that the weather conditions on launch day were adequate. Light rain continued during the launch, and spectators were seen sporting rain jackets and umbrellas, but the launch was still scheduled to go off without a hitch.

Chaos in the opening seconds 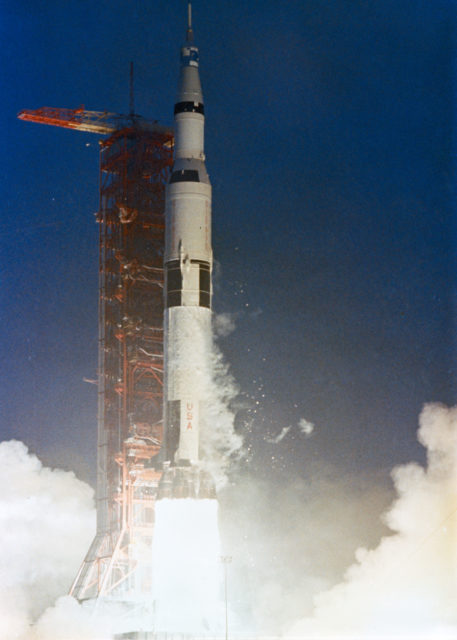 After what seemed like a perfect liftoff, the Saturn V rocket ran into some troubles. After approximately 36.5 seconds after liftoff began, the rocket was struck by lightning. Capsule communicator (CAPCOM) Gerald Carr had only just acknowledged Conrad’s statement that the roll program was complete when a loud crackle shot through the ears of the astronauts onboard the Saturn V and those working in Mission Control. Command Module Pilot (CMP) Gordon asked, “What the hell was that?” but at this point, no one knew the answer.

Due to the lightning strike, the master alarm rang off and the Main Display Console in the rocket began to light up. Everything went down. Conrad even said, “Okay, we just lost the platform gang. I don’t know what happened here. We had everything in the world drop out.” It seemed that all of their electric power generation and distribution systems had failed entirely. By this point, it wasn’t looking good for the Apollo 12 mission – they might have to abort. 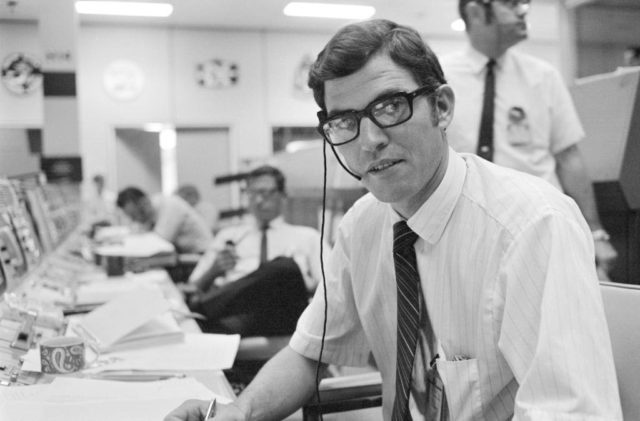 Back at Mission Control, EECOM John Aaron recalled a time when he observed a situation just like this. About a year prior to the Apollo 12 launch, Aaron had observed a simulation at the Kennedy Space Center that created the same anomaly. On his own prerogative, Aaron looked into the cause of such a malfunction and discovered that the Signal Conditioning Electronics (SCE) system was the root of the problem. He also discovered that by switching the SCE to its auxiliary function, telemetry, which is the data passed between the spacecraft and Earth, could be restored to the rocket.

With no other options, Aaron made his recommendation. 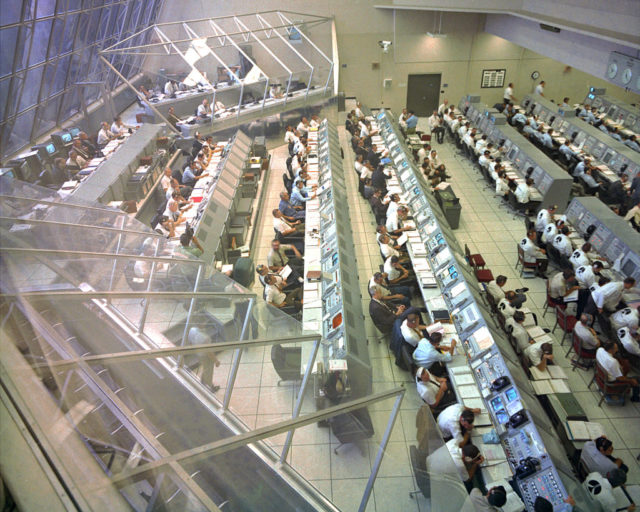 Aaron was one of few flight controllers to be familiar with the SCE system. In fact, after he recommended to the astronauts, “Flight, try SCE to AUX,” his flight director and CAPCOM Carr requested that he repeat himself. Even the astronauts in the rocket did not know what he was talking about. Thankfully, Bean was familiar with the location of the SCE switch inside the capsule, and did as Aaron recommended. Bean flicked the switch from SCE to AUX and telemetry was quickly restored.

Thanks to Aaron’s quick thinking and problem-solving, the second moon-landing mission was able to continue as intended. The phrase “SCE to AUX” is still used today to describe narrowly averting catastrophe by devising an ingenious plan.

A fear of crash landing 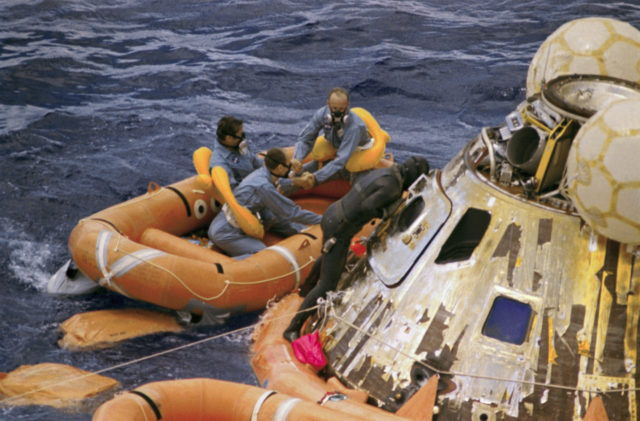 The three Apollo 12 astronauts shake hands as they congratulate one another after splashdown. In the raft are (clockwise, starting at top): Charles Conrad, Richard Gordon, and Alan Bean, awaiting helicopter pickup. (Photo Credit: Bettmann / Getty Images)

Although the mission continued on after the incident and successfully made it into orbit and landed on the moon, concerns as to the safety of Saturn V were not quieted. Back on Earth, flight commanders were actually concerned that the lightning could have caused issues with the parachute deployment of the command module.

If this were the case, then the crew could have a successful voyage all the way until re-entry into the Earth’s atmosphere, where the module would eventually crash land into the Pacific Ocean, killing all members of the Apollo 12 mission instantly. Unfortunately, there was no way to determine whether the parachute mechanism had been affected by the lightning strike, and so the flight commanders chose not to inform the astronauts of their concerns – they would just have to wait and see.

Fortunately, the parachute mechanism was not affected by the lightning strike and the command module was able to parachute and make a safe splash into the Pacific, where the three astronauts were retrieved. 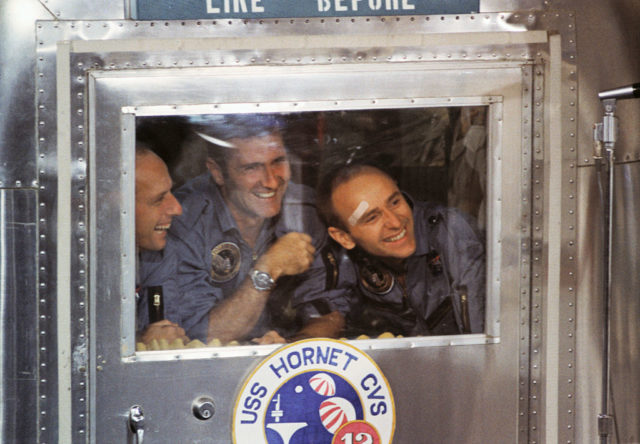 Aboard The USS Hornet – Safely aboard the carrier Hornet, Apollo 12 astronauts gin from the window of their Mobile Quarantine Facility. Left to right: Charles Conrad, Richard Gordon, and Alan Bean. The patch on Alan Bean’s forehead covers a cut he received form a camera during splashdown. (Photo Credit: Bettmann / Contributor)

More from us: The Extreme Measures NASA Took to Train Its Astronauts for Space

It wasn’t until after the systems went down and telemetry was restored that it was discovered that the Saturn V had been struck by lightning… twice. Up until this launch, weather conditions were not really regarded as an issue when it came to the safety of rocket launches. Apollo 12 taught an important lesson, and atmospheric conditions were taken into far more consideration prior to liftoff for future Apollo missions.

« Judi Dench Was Told She Had the ‘Wrong Face’ For Movies
50 Years Later, Don McLean Has Revealed the Meaning Behind ‘American Pie’ »