This Is What Your Favorite Nostalgia Toy Says About You

Everyone had a favorite toy growing up, from Barbie to Hot Wheels. Did you know they gave those around you a glimpse into your personality and how you think? It’s true! Here’s what your go-to children’s toy says about you – it’s eerie how accurate these are!

You’ll be hard-pressed to find someone who didn’t have a Barbie doll growing up (or, at least, knew someone who did). She’s been a toy store staple since the late 1950s and continues to be the go-to for many youngsters, especially given the accessories and Dreamhouse products you can collect. 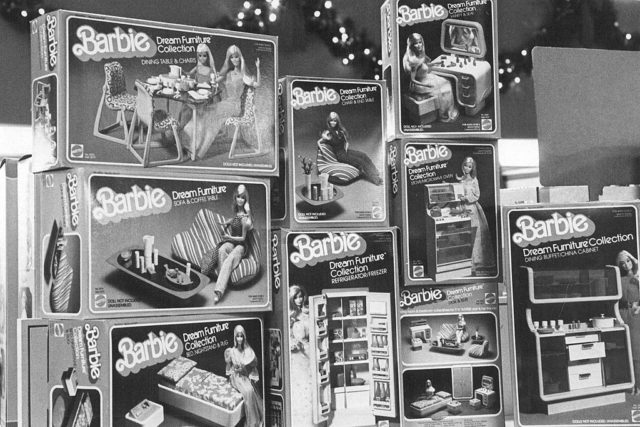 What Barbie says about you depends on the era in which you grew up. Later generations will know Barbie for being a career woman who saw the world as her oyster, while those who played with her during the 1960s and ’70s likely remember her as being a thin-waisted fashionista who lounged around the pool and drove an enviable convertible.

If Barbie was your favorite toy growing up, then you’re someone who enjoys the classics. You also likely believe in female empowerment and that women can accomplish anything and everything they want, just like the Barbie of later generations!

LEGO is without a doubt one of the most iconic toys ever made. The company first launched its plastic bricks in 1949, and to this day it continues to be as popular with both children and adults alike.

The majority of us have fond memories growing up of grabbing the LEGO bucket, dumping it on the ground and building whatever our hearts desired. On the flip side, we also have memories of having to tediously clean up the tiny bricks, and don’t get us started on the pain of accidentally stepping on one… Ouch! 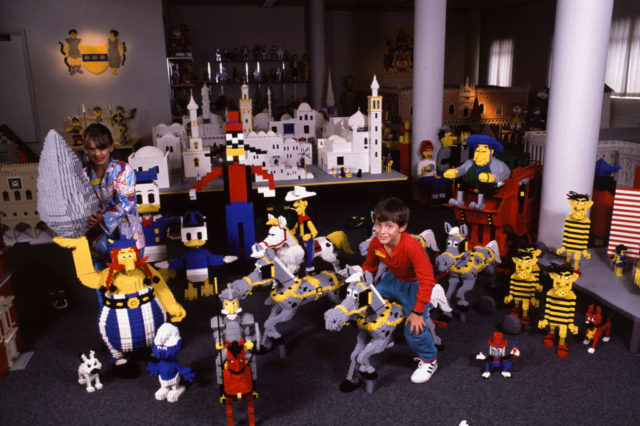 If LEGO was your go-to growing up, you’re someone who is in constant search of a creative spark. You’re an artsy person who likes working with your hands. You’re also analytical, which was a must when ensuring your LEGO structures were stable. If you’re lucky, you were able to bring this passion into adulthood – maybe you became an architect and designer!

Tonka trucks have transcended generations. Hitting the market in the mid-1940s, the then-metal trucks were immediately popular with children across the United States. Whether you grew up during this time or were introduced to the toys following their switch to plastic hardware, you likely have fond memories of your Tonka truck collection. 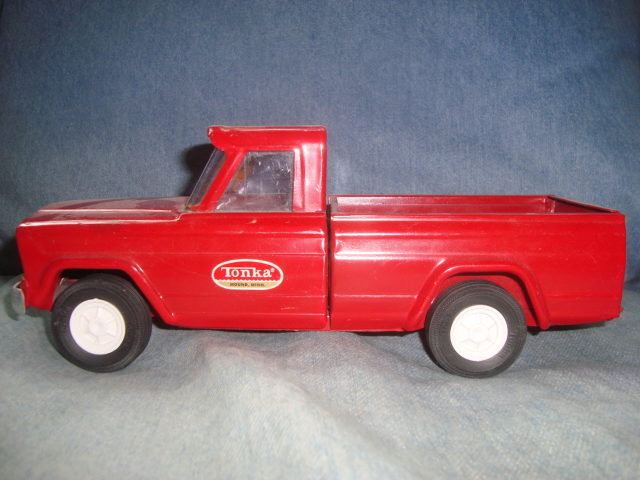 If you actively played with Tonka toys growing up, odds are you were someone who spent the majority of your time outdoors, pushing your trucks and miniature construction vehicles through the dirt and sand. This love for the outdoors likely stayed with you into adulthood, meaning you may have decided to enter into a career in construction or another job where you’re allowed to drive the real-life versions of the vehicles you played with as a child.

You’re likely also an automotive fanatic, with a taste for the classic, vintage cars that owned the roads during your childhood. Cars nowadays have too many gizmos and gadgets (and they’re also way too small). You miss the days when cars were a thing of beauty and people cared more about capability, rather than tech.

My Little Pony was introduced to the masses in 1982, a year after the release of the original My Pretty Pony toys. Throughout the ’80s, it was one of the most popular toy franchises on the market, but was discontinued in the ’90s due to increased competition. This was followed by a failed revival in 1997 and a more successful one in 2003. 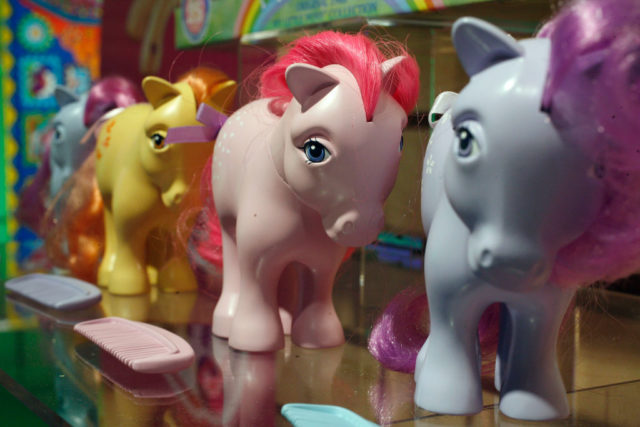 The appeal of My Little Pony was simple: children love horses and bright colors. What’s more, the ponies’ brush-able manes meant children could give them whatever hairstyle they wished. If you loved My Little Pony growing up, you’re someone who sees the magic in things. Your brain has the ability to see beyond what the average person does, and you’re constantly in search of ways to make life more enjoyable.

If you’re like us, you also look at the current iterations of My Little Pony and think, “What the heck happened to them? They aren’t my ponies!”

Transformers completely changed (or should we say, transformed) the toy scene upon their release in 1984. The toys were all the rage, and have since spawned numerous television and movie series. Almost every boy in America had one during the ’80s, and, today, the original toys are considered valuable collector’s items. 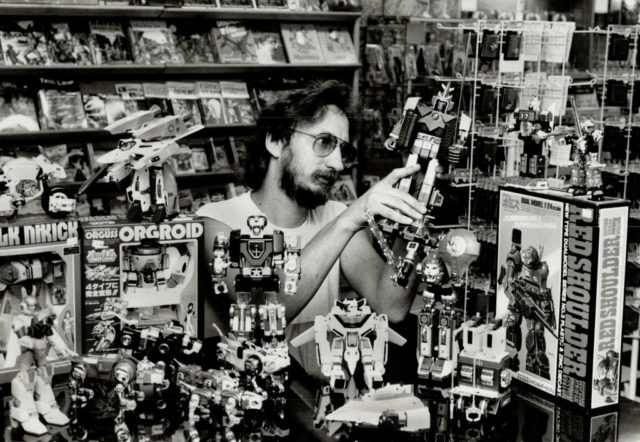 If your favorite toy growing up was a Transformers action figure, odds are you’re interested in the newest technologies. You’re not content with settling for ineffective ways of life and, as such, are always setting your sights on the future. Who knows, maybe you believe we’ll have transforming robot cars during your lifetime.

There’s also a chance the inner workings of technological advancements and machines fascinates you, meaning you’ve got an analytical mind. You likely became (or considered becoming) an engineer or someone involved in advanced design processes.

You might not have thought cardboard circles would ever become a popular children’s toy, but that’s exactly what happened in 1990s, following the revival of milk cap “Pogs.” They just weren’t given to children, either. They were so popular that even adults got in on the craze!

School districts ended up banning Pogs from playgrounds, as the game was viewed as a form of gambling. This was because children would keep the ones they won from others. 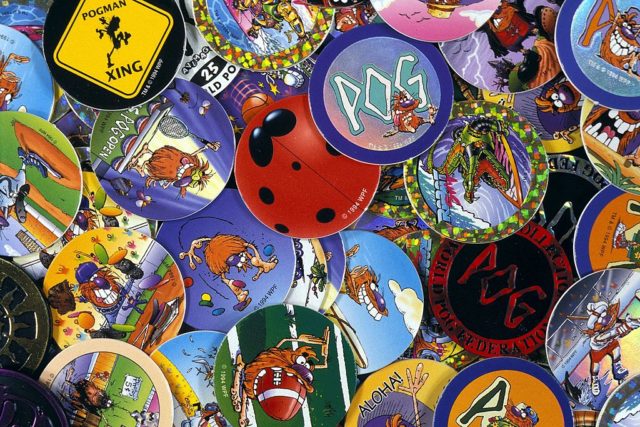 If you played Pogs growing up, you’re likely a super competitive person who loves the thrill that comes with winning, whether that be when playing board games or at the casino. There’s nothing better than the triumph that comes with being the victor.

Is there a toy that defines the 1970s better than Stretch Armstrong? The gel-filled action figure was first introduced in 1976 and quickly became one of the hottest toys on the market. Kids across America spent their days stretching his legs and arms, sometimes with the aim of seeing how much they could stretch him until he broke.

Particularly devilish children would also use the toy as a projectile – similar to a slingshot – taking aim at unsuspecting siblings. 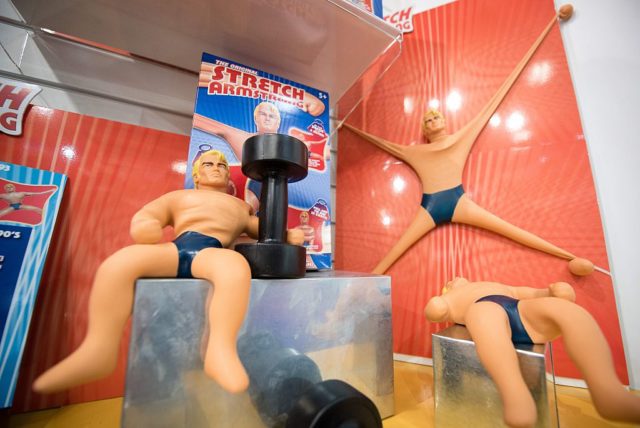 If Stretch Armstrong was your favorite toy growing up, odds are you’re someone who’s frequently stressed and has gone through many stress balls during your lifetime. Who knows, maybe it’s because you entered into a stressful office career. If not stressed, you’re likely quick-tempered and have been told by those around you to take a few deep breaths before continuing with a difficult situation.

Cabbage Patch Kids were introduced in the 1970s and almost immediately caused a craze across America. They were so popular, in fact, that they caused toy store riots on Black Friday in 1983. Almost every girl in the country had at least one toy – complete with the adoption certificate – which they took with them everywhere they went. 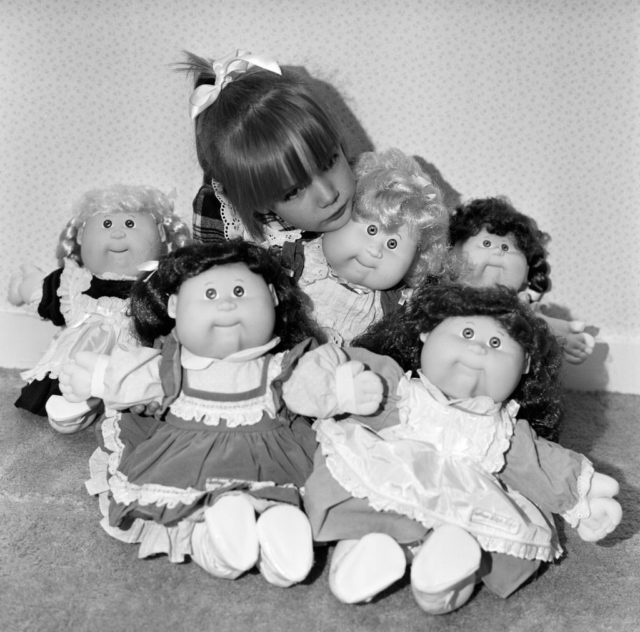 If you had one or more Cabbage Patch Kids, odds are you’re someone known for their motherly nature. You dote on those around you and are considered the “mom” of your friend group, making sure everyone has what they need. When your kids were growing up, you were deeply involved in their education, participating in PTA meetings, school bake sales and organizing fundraisers for field trips.

If we’re being honest, those in your life likely don’t know what they’d do without you.

Growing up, everyone wanted an Easy-Bake Oven. As a child, our parents never let us use the actual oven because they were scared we would hurt ourselves – or worse, burn the house down. With the Easy-Bake Oven, we were able to bake sweet treats without them having to worry. While the toys are still sold to this day, they’ll never beat the original designs seen in the first iteration of the ovens. 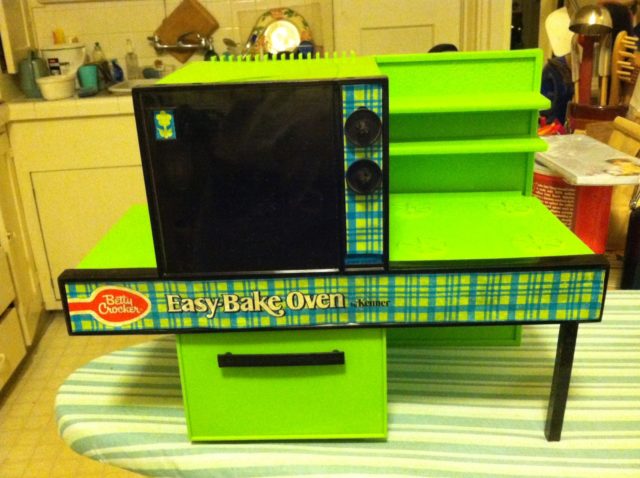 If you had an Easy-Bake Oven growing up, you’re someone who to this day enjoys being in the kitchen. Whether it be baking or cooking a proper meal, you feel most at home thinking up new recipes and sharing your dishes with your loved ones. Even when your masterpieces don’t turn out the way you thought they would, you don’t fret because you enjoyed the cooking process.

If we were to look in your fridge and pantry, odds are we’d find untold amounts of ingredients, likely purchased from Costco or your local bulk store. In fact, are you sure you don’t have any flour on your face right now?

He-Man and She-Ra are without a doubt two of the most iconic ’80s cartoon characters ever. He-Man was first introduced to audiences with He-Man and the Masters of the Universe, and two years later was followed by He-Man and She-Ra: The Secret of the Sword. 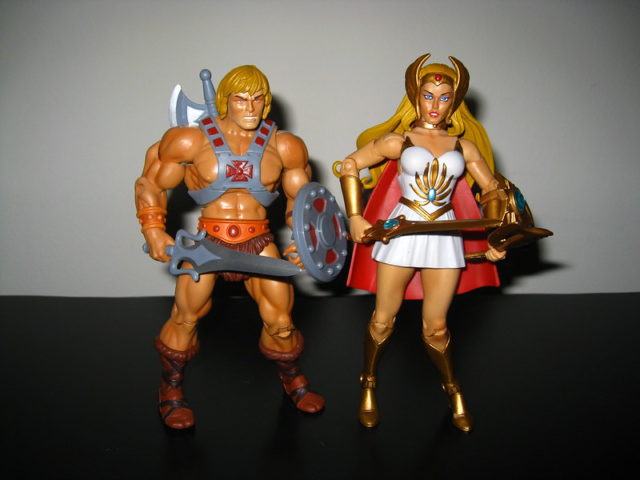 The cartoons’ popularity spawned a host of merchandise, including action figures. While He-Man was popular with boys, She-Ra was particularly so with girls, who loved having an action figure of their own, as opposed to the dolls usually marketed to them. She was seen as a symbol of female independence and empowerment, and who doesn’t love that?

If you owned a She-Ra action figure growing up, you’re likely a fierce, independent woman who knows what she wants from life and refuses to let anyone get in the way of you achieving your goals. You don’t let yourself be put down by today’s standards, a mindset you instilled in your own daughters from a young age.

Has there ever been a military-themed toy more popular than G.I. Joe? The action figure was introduced in the 1960s, and over the decades has remained popular, despite undergoing numerous revisions. Children everywhere, particularly boys, owned at least one and were obsessed with the media spin-offs that resulted from its popularity. 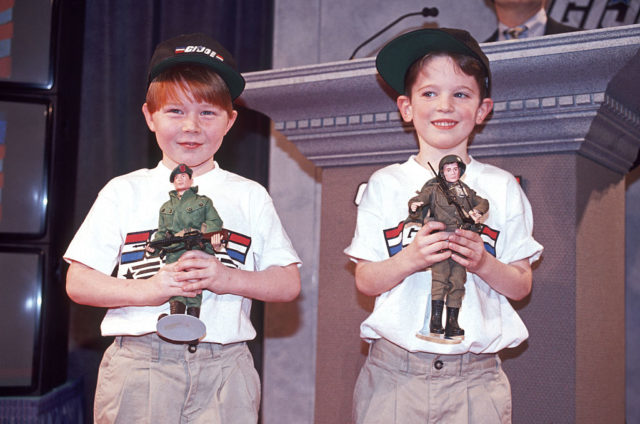 If G.I. Joe was your favorite toy, odds are you entered the US Military at a young age. Just like Joe, you accepted your duty to serve your country – and did so with pride. You embody the life of a soldier, and following your retirement have continued to be involved in the veteran community. You’ve also relayed war stories to your kids and grandkids so many times that they audibly groan when you share another one.

Little did Hasbro realize the craze they’d create with the release of Hot Wheels in 1968. The miniature cars and tracks were – and continue to be – incredibly popular, especially The Original Sweet 16. For many, they were what first made them realize they had an affinity for cars and speed. 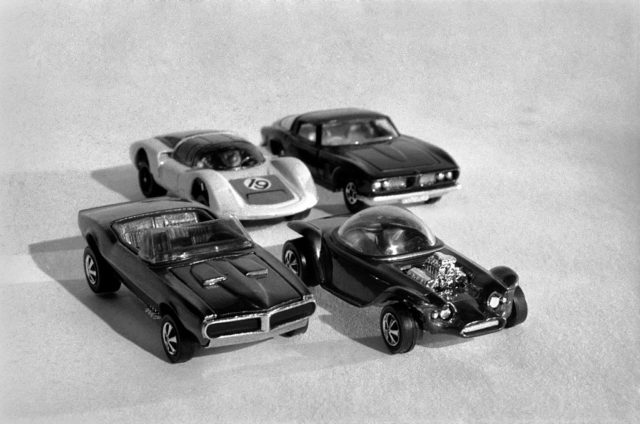 If you were a fan of Hot Wheels, cars are the name of the game, and you’ve spent much of your life learning the ins and outs of all things automotive. You likely own more than one vehicle, and frequent car shows like they’re going out of style. You appreciate anyone who puts care and love into their ride, and you’ll go out of your way to compliment someone’s paint job.

As for your career, you likely opted for a position within the car industry, whether that be manufacturing, sales or maintenance. If not, you’ve found other ways to satisfy your need for speed, such as attending (or watching) NASCAR and Formula 1 races.