Christopher Walken has played some of the strangest, most iconic characters in award-winning films spanning his 70+ years in show business. Below is a list of eight on-set stories from his various co-stars revealing just how weird Walken can get. The different antics he gets up to on-set somehow make him even more loveable than before. We didn’t know that was possible! 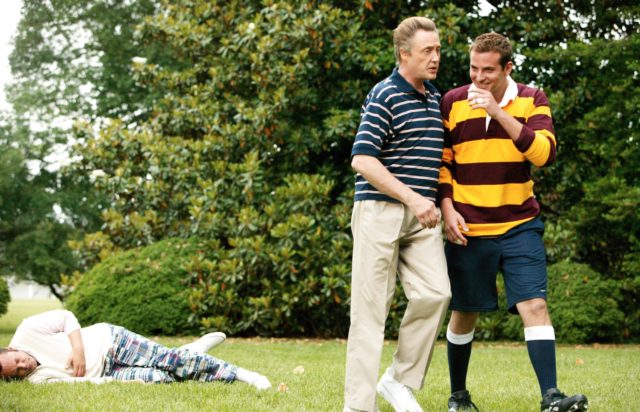 Like many of us, Bradley Cooper is a huge fan of Christopher Walken. He can also do a pretty good impression of him. During an interview on Late Night with Conan O’Brien, Cooper explained how authentic Walken is, saying he “is what you think he is.” Cooper admitted he was actually intimidated by him while filming Wedding Crashers.

Apparently, Walken is not like a regular guy who asks how you are doing. He just sits in his makeup chair saying random things such as, “Pineapple… I like to eat it.” That’s hilarious!

2. He told Jay Mohr how it would be cool to have a tail 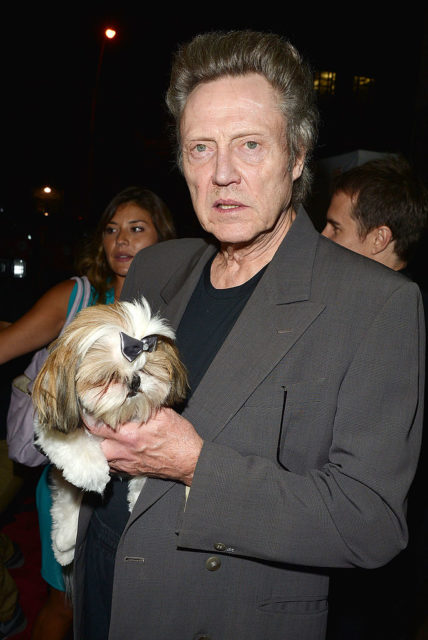 Jay Mohr’s dog doesn’t have a tail. This apparently shocked Walken. Mohr said how while in the makeup trailer for Suicide Kings, Walken saw his dog with no tail and proceeded to talk at length about how cool it would be if humans had tails.

He said, “People could tell when you were angry. They’d go, ‘Get back! Look out! Don’t [mess] with Chris today. Look at his tail!’” 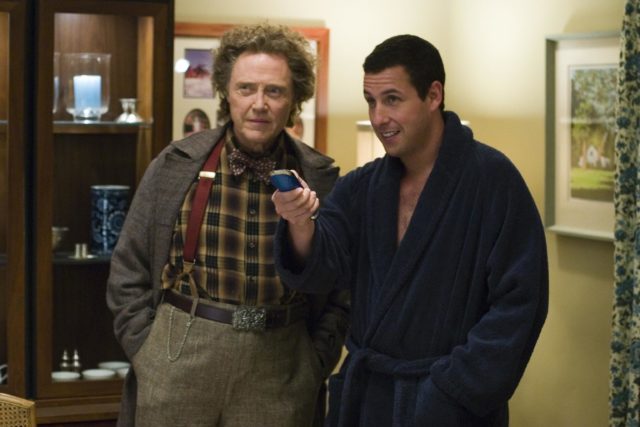 Walken hates memorizing lines, so once he’s done it, don’t try to change them. Adam Sandler confirmed this when on Friday Night with Jonathan Ross to promote his film, Click. Sandler said that when he confronted Walken with new lines, Walken replied with “I already memorized it.” When Sandler tried to convince Walken to change his lines a second time, Walken reiterated, “But it’s memorized already.”

After that, Sandler heard him loud and clear. Instead, Sandler changed his own dialogue so that Walken’s lines didn’t have to. 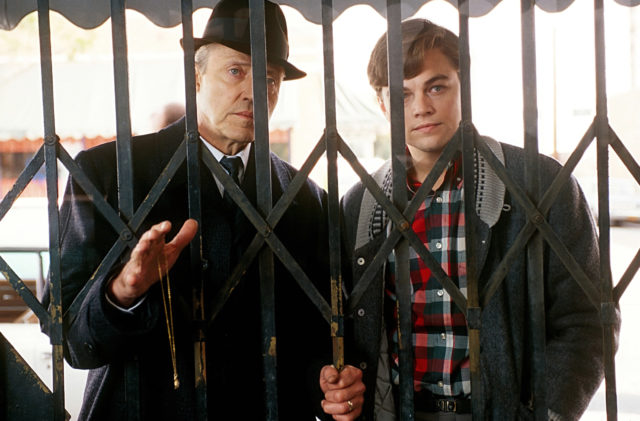 Christopher Walken and Leonardo DiCaprio together in a scene from Catch Me If You Can (Photo Credit: andrewz / MovieStillsDB)

During an emotional scene in the 2002 film, Catch Me If You Can, Walken improvised a very believable moment of hyperventilation. So believable in fact, he convinced co-star Leonardo DiCaprio that he was actually hyperventilating!

In an interview with IGN, DiCaprio admitted that when he saw Walken hyperventilating, he began to panic. Walken’s performance was so realistic that DiCaprio almost yelled “CUT!” because something was wrong with him and he wanted to make sure he was okay.

5. He pretends it’s his birthday, even when it isn’t 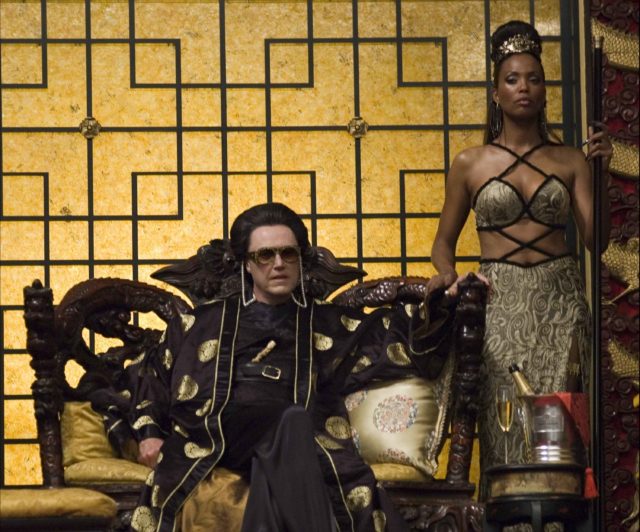 Christopher Walken sitting on a throne, Aisha Tyler standing beside him, in Balls of Fury (Photo Credit: Zayne / MovieStillsDB)

Walken is quite the trickster. Apparently, one of his favorite pranks is to tell everyone on set that it is his birthday when it definitely isn’t his birthday. He loves it when everyone buys him a cake and sings to him – it is highly entertaining for him.

Co-star Maggie Q from Balls of Fury revealed on Reddit Ask Me Anything that while on set, she called him out after he pulled this prank, saying it was not his birthday. To this, Walken simply chuckled to himself like a child.

6. Quentin Tarantino was impressed by him 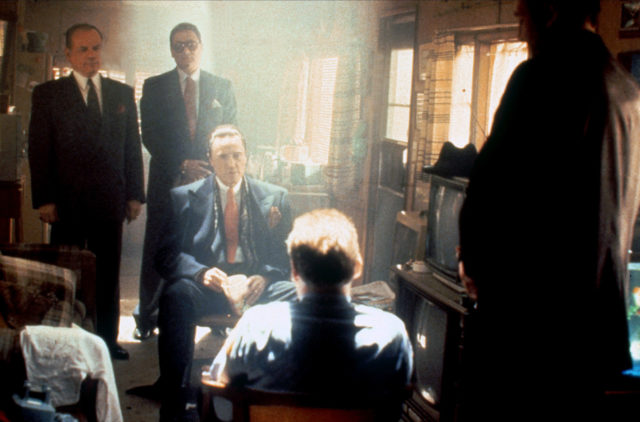 Quentin Tarantino was impressed by Walken after an incredible scene between him and Dennis Hopper in True Romance. The dialogue was long, and Walken said all of Tarantino’s screenplay verbatim. Tarantino said that he was embarrassed and almost intimidated that such an incredible actor would take his work so seriously, not having smoothed over any of the “uhs” “thes,” or “sos” he wrote.

Considering Tarantino’s success in Hollywood, that is some pretty high praise. 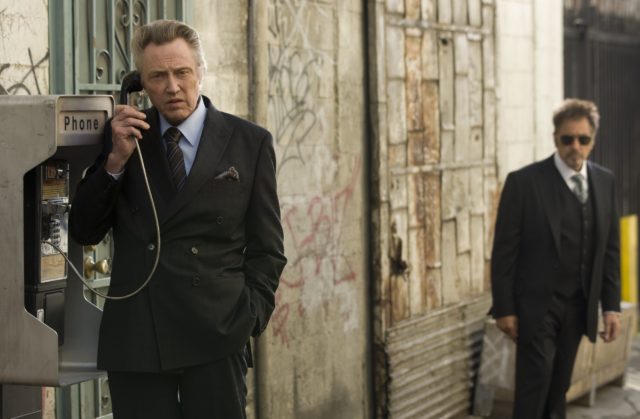 Christopher Walken in a scene from Stand Up Guys (Photo Credit: ansoro / MovieStillsDB)

Apparently, Walken loves cats. Vanessa Ferlito confirmed this when she told the Talking Sopranos podcast that Walken had requested that a production assistant bring her cat to the set.

Why did he want the cat there? So he could play with it all day! What could be more fun than snuggling with a cat between scenes?

8. He made Keir O’Donnell ride to set with him 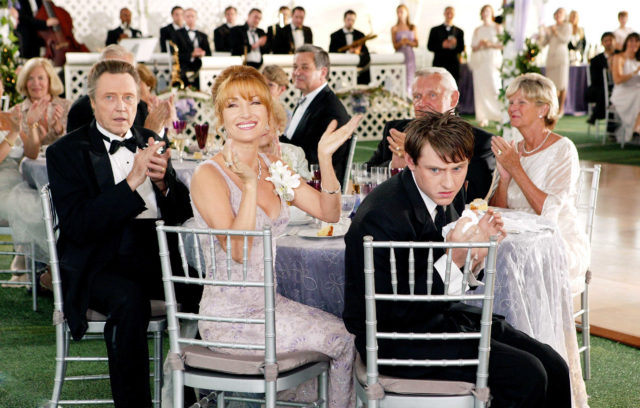 While playing Walken’s son in Wedding Crashers, Keir O’Donnell said that Walken requested his driver take the two of them to the set together every day. This was so that they could begin the day like a real father and son. O’Donnell told Mel Magazine, “I still don’t know to this day if he was just messing with me, or if he liked my company, even though we never said a word to each other. Either way, it was a special moment for me.”

Method acting or not, the two made a great father-son team in the film!

« Steve McQueen Was Supposed to Be at Sharon Tate’s House on the Night of the Manson Murders
A Century Later, the Mystery of ‘Lady Bluebeard’ Is Still Unsolved »