There’s an old saying that history remembers the victors. So today, we might assume that many people who have gone down in history were good humans. However, after doing a deep dive into their personal lives, it turns out that these people who are believed to be good were actually quite wicked. Perhaps we should revise our history books to include the darker sides of these individuals and ensure we don’t present a false narrative. 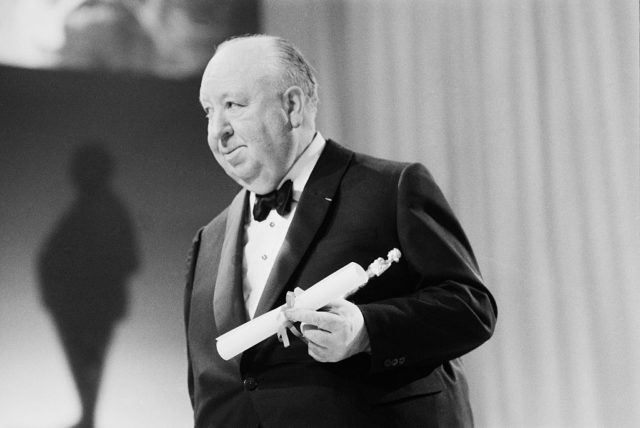 Alfred Hitchcock has been hailed as one of the greatest movie directors of all time. He was the mastermind behind many Hollywood classics, including Psycho (1960), The Birds (1963), and Marnie (1964). However, although he might have been a great director, Hitchcock treated his female actresses like dirt.

More specifically, Alfred Hitchcock terrorized his muse, Tippi Hedren. While filming The Birds, Hitchcock promised the actress that no live birds would be used in the attic scene. However, on the day they were set to film the attic scene, Hedren was told that real birds would be used. She had to endure real birds endlessly pecking at her for five days. She was left so traumatized from this scene that she was forced to take a week off from filming to recover and nearly quit acting forever. 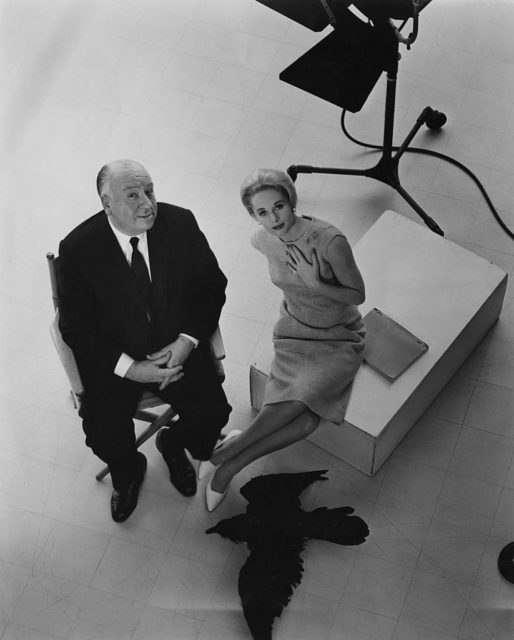 Director Alfred Hitchcock and Tippi Hedren pose with a stuffed raven on the set of the film ‘The Birds, 1963. (Photo Credit: Archive Photos/ Getty Images)

Hitchcock didn’t just leave Hedren physically traumatized but also psychologically traumatized. In her 2016 memoir, Tippi, Hedren recalled Hitchcock stalking her house and trying to kiss her against her will. She also revealed that while working on Marnie, Hitchcock installed a door that connected his office to her dressing room. In 2016, Hedren’s granddaughter Dakota Johnson blamed Alfred Hitchcock for the untimely end of Hedren’s career. “Hitchcock ruined her career because she didn’t want to sleep with him, and he terrorized her. He was never held accountable.”

2. Woodrow Wilson was a huge racist 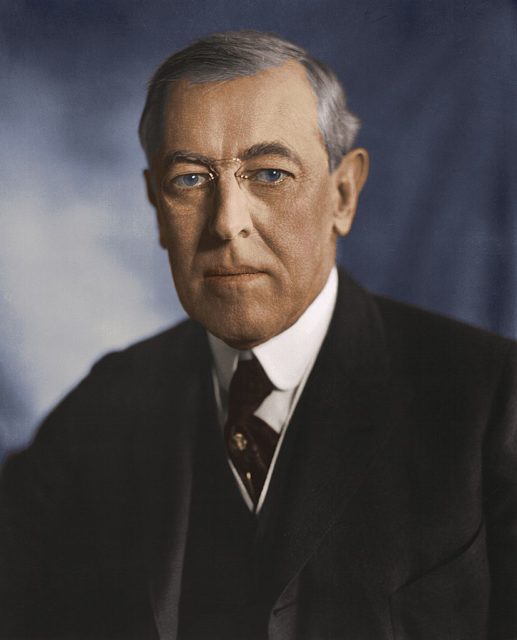 History remembers Woodrow Wilson as the individual who made the Fourteen Points speech and spearheaded the League of Nations in the months following the First World War. Not many people realized that American President Woodrow Wilson was a huge racist who re-segregated the American federal government.

During the Reconstruction era, many Federal government agencies had been integrated. However, during his first year as president, Wilson allowed his cabinet (primarily white Southerners) to re-segregate federal government employees by race. During his presidency, Wilson’s cabinet re-segregated the Post Office, the Bureau of Engraving and Printing, the Navy, the Interior, the Marine Hospital, the War Department, and the Government Printing Office. 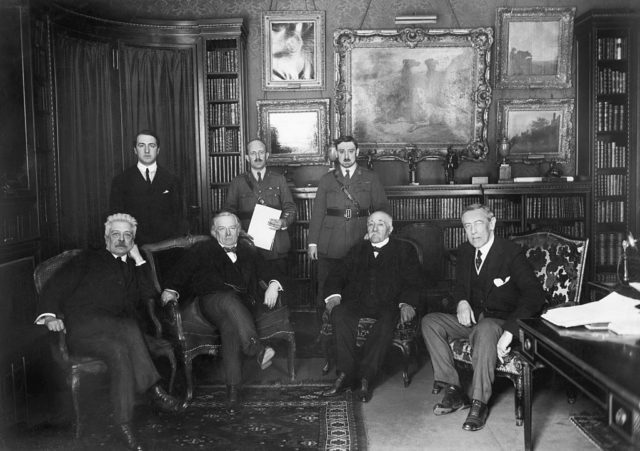 Woodrow Wilson also openly supported the Confederation and the KKK. He was the first president to ever screen a movie inside the White House when he watched Birth of a Nation– a film that basically revamped the KKK. He also wrote a racist five-volume history textbook, titled A History of the American People, which romanticized slavery and the old South. Wilson also believed that the KKK were wrongly denied the right to use violence to express their feelings and beliefs. 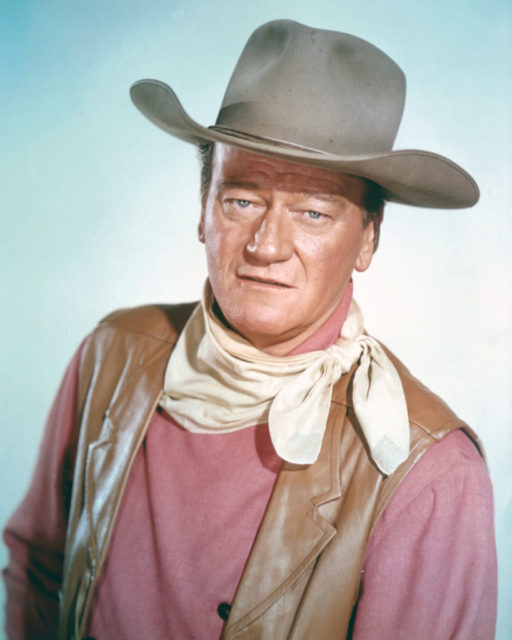 John Wayne is considered one of the best Western actors of all time, but he was actually an extremely racist and homophobic individual. For starters, Wayne had to be physically restrained at the 1973 Academy Awards when Indigenous actress Sacheen Littlefeather was sent onstage for Marlon Brando to speak out about the protests at Wounded Knee.

This demonstration angered John Wayne, who had previously said in a 1971 Playboy interview that he feels no empathy for Native Americans, stating: “I don’t feel we did wrong in taking this great country away from them, if that’s what you’re asking. There were great numbers of people who needed new land and the Indians were selfishly trying to keep it for themselves.” 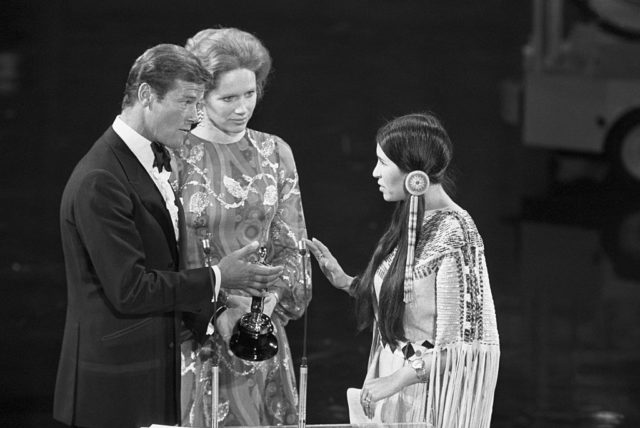 At the 1973 Academy Awards, Sacheen Littlefeather refuses the Academy Award for Best Actor on behalf of Marlon Brando who won for his role in ‘The Godfather.’ She carries a letter from Brando in which he explains he refused the award in protest of American treatment of the Native Americans. (Photo Credit: Bettmann/ Getty Images)

In this same interview, Wayne also said that he supported white supremacy. “I believe in white supremacy until the blacks are educated to a point of responsibility. I don’t believe in giving authority and positions of leadership and judgment to irresponsible people.” In this 1971 Playboy interview, Wayne also said “I don’t feel guilty about the fact that five or ten generations ago these people were slaves.” 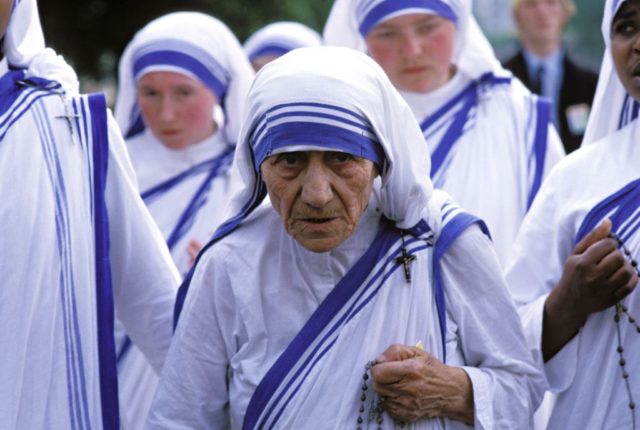 She might be a saint but that doesn’t mean Mother Teresa was a very good human. Mother Teresa’s real motives were not necessarily helping the poor and the sick, rather she wanted to boost the amount of Roman Catholics.

Mother Teresa worked with the sickest individuals in Calcutta, India. Although she claimed to heal people, many of her treatments just made her patients sicker. Needles were reused, expired medicine was given to patients, and untrained volunteers were responsible for caring for some of the sickest people in India. 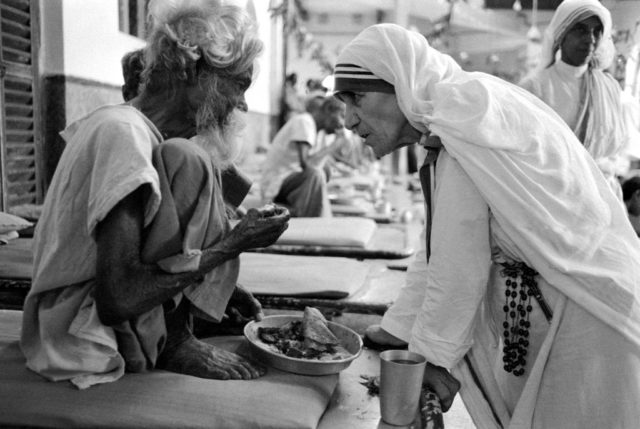 Because she was working in such a poverty-stricken area, many people have made the case that a lack of funds led to these conditions in Mother Teresa’s hospices. However, Mother Teresa herself was able to bring in $30 million in funding from various donors worldwide. This money was never used to improve the conditions of her hospices. In fact, many people don’t even know where the money went.

Because Mother Teresa was Roman Catholic, she believed that human suffering brought people closer to Jesus Christ. The kicker was that when Mother Teresa started having health issues, she visited top-notch American hospitals for world-class treatment.

5. Walt Disney was more wicked than his villains 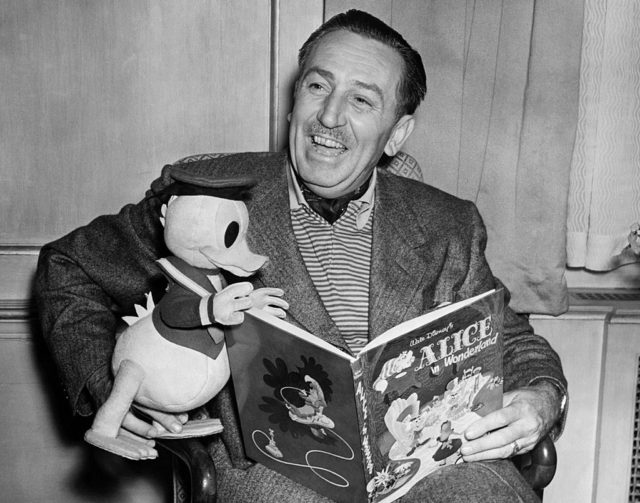 Walt Disney may have created Mickey Mouse and was responsible for the creation of Disneyland and Disney World, the “happiest places on earth,” but he was just as wicked as some of his villains.

Like so many people on this list, Walt Disney was a racist. Some themes of discrimination and stereotypes can be seen in his earlier films (most notable is Song of the South). Along with racism and antisemitism, some people think Walt Disney was sexist. According to Ward Kimball, one of Walt’s associates, Disney “didn’t trust women or cats.” 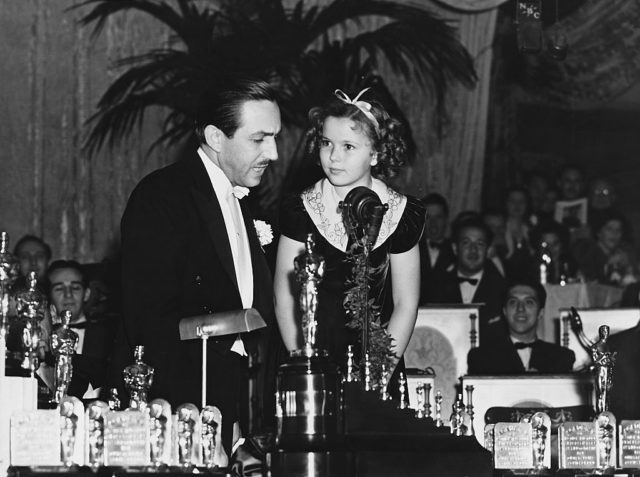 In 1938, Walt Disney also sent a rejection letter to Mary Ford, who had been applying for a position in Disney’s inking and painting department. In this letter, Disney tells Ford that “women do not do any of the creative work… as that work is performed entirely by young men.” Now to be fair, it wasn’t very common for any woman to be employed in 1938. However, Disney didn’t trust women so it is perhaps fair to say that he was a bit sexist when it came to women working for his company.

6. Coco Chanel was a Nazi spy 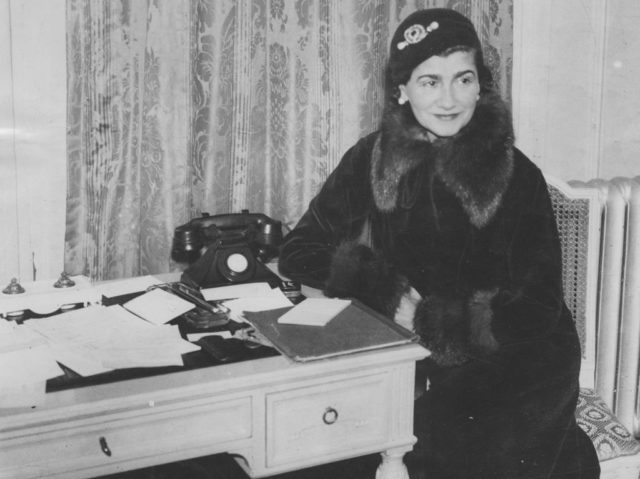 Coco Chanel is best remembered for creating her clothing line and the iconic Chanel No.5 perfume, which is one of the most popular and most recognizable perfume scents in history. However, in order to ensure her business would survive the Second World War, she began dating German military officer Baron Hans Günther von Dincklage and agreed to be an undercover Nazi agent.

Journalist Hal Vaughan presented compelling evidence in his 2011 biography, Sleeping With The Enemy: Coco Chanel’s Secret War, regarding Chanel’s espionage activities. He argued that Chanel was known as Agent 7124 and served the German Abwehr during the Second World War. Her code name was allegedly Westminster, after her former lover Hugh Richard Arthur Grosvenor, the Duke of Westminster. 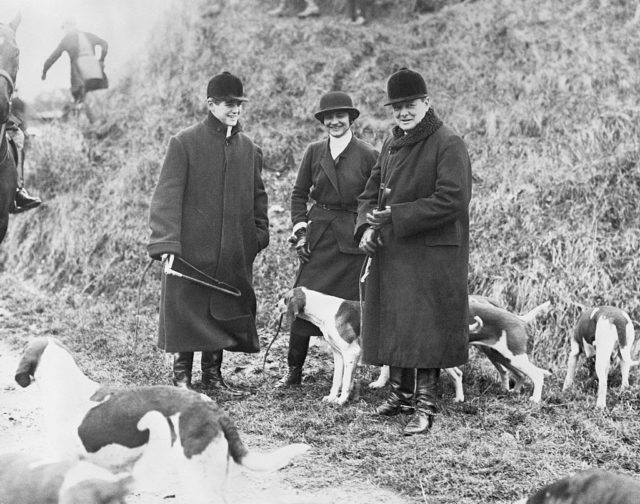 Winston Churchill enjoys a few days’ boar hunting with his son Randolph and Coco Chanel in the forests near Dieppe, circa 1928. (Photo Credit: Bettmann/ Getty Images)

In the later years of the war, Chanel was tasked to use her personal connection to British Prime Minister Winston Churchill to feed him false information. The plan would have happened if it wasn’t for Vera Lombardi (a close associate) denouncing Chanel and her associates as German spies. After the end of the Second World War, Chanel appeared in French courts where arrested German officers tied her to the Abwehr. However, she was able to wriggle out of any official accusations and lived out the rest of her life as a celebrity. 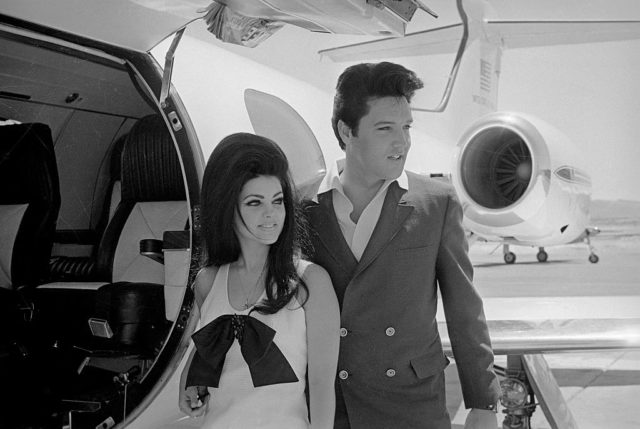 Newlyweds Elvis and Priscilla Presley prepare to board their private jet following their wedding at the Aladdin Resort and Casino in Las Vegas. (Photo Credit: Bettmann/ Getty Images)

Elvis Presley was a heartthrob for teenage girls everywhere. More concerning, however, is the fact that Elvis Presley was known to date and sleep with underaged girls. For starters, Elvis Presley began dating his future wife Priscilla Presley when she was just 14 years old and he was already 24. The two moved in together when Priscilla was only 16.

Priscilla has since claimed that she and Elvis never had sex until they were married. However, after Priscilla had their daughter, Lisa Marie Presley, Elvis lost all sexual interest in Priscilla.

According to Joel Williamson, author of Elvis Presley: A Southern Life, Elvis would bring underaged girls with him on tour and was also known to engage in sexual activity with extremely young girls. This typically gets overlooked when people recall Presley’s legacy. 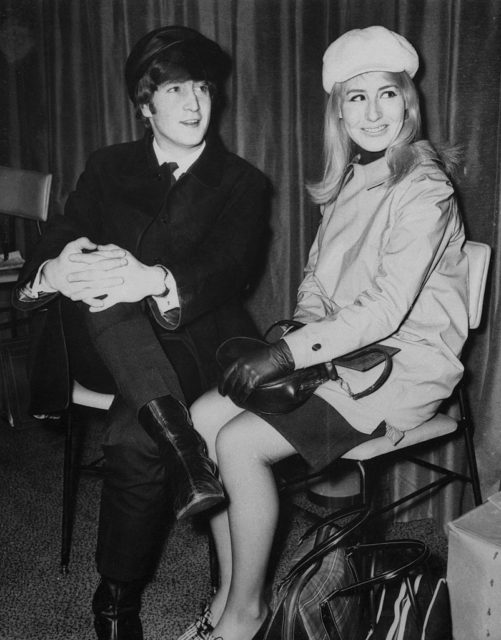 When we think of John Lennon, we think of a man who promoted peace wherever he went. His song “Imagine“ is basically an anti-violence anthem. However, as it turns out, John Lennon was not nearly as pleasant as his music might have us believe. For starters, he used to cheat all the time on his first wife, Cynthia Powell.

Cynthia Powell gave birth to Lennon’s first son, Julian. However, John Lennon was not only an absent father, but when he was home with Julien he was often verbally and sometimes physically abusive. A 1968 letter written by Cynthia and John’s housekeeper details that sometimes John Lennon would smack Julian when he got frustrated. 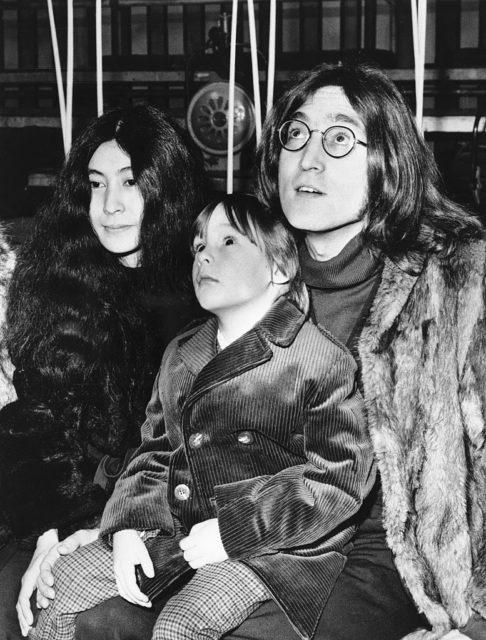 John Lennon‘s most famous affair was with Yoko Ono. In early 1968, Lennon told Cynthia that he was having an affair and the two divorced. Ono and Lennon married in 1969. However, during their relationship, Lennon was extremely possessive of Ono, forcing her to accompany him everywhere- even to the bathroom. The public blamed Yoko Ono for breaking up the Beatles when in reality it almost seemed like John Lennon was forcing her to hang around them all the time.

8. Thomas Edison was a thief 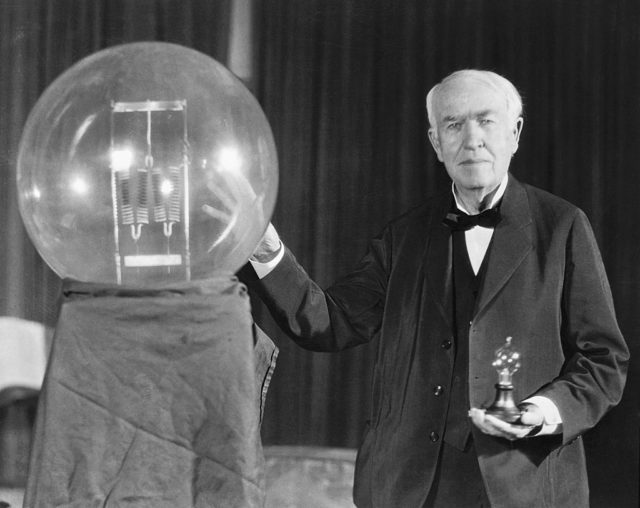 History often regards Thomas Edison as the best inventor of all time. After all, he was responsible for creating the lightbulb, right? In reality, most of Thomas Edison’s most famous inventions were stolen from other individuals. He was known to steal the patents of other inventors and take credit for things he didn’t create.

In fact, it was a group of inventors who invented the lightbulb – not just Thomas Edison. However, it was Edison’s patent that was granted and only his name has gone down in history as the inventor of the lightbulb.

« The Unbelievable Story of Sara Jane Moore, The Woman Who Nearly Assassinated President Gerald Ford
What Does It Mean To Be A ‘Friend of Dorothy’? »