The iconic film Twins (1988) made audiences’ sides hurt with laughter at the priceless comedy juxtaposition of Arnold Schwarzenegger and his “twin” Danny DeVito. Theaters were packed with people wiping tears from their eyes and laughing at all of the antics the two got up to. Its success seems worthy of a sequel, or maybe possibly a remake, right? When the idea was brought to his attention, Jason Momoa was thrilled… but is a sequel really on its way?

Before Twins and other films, Schwarzenegger was an award-winning strong man 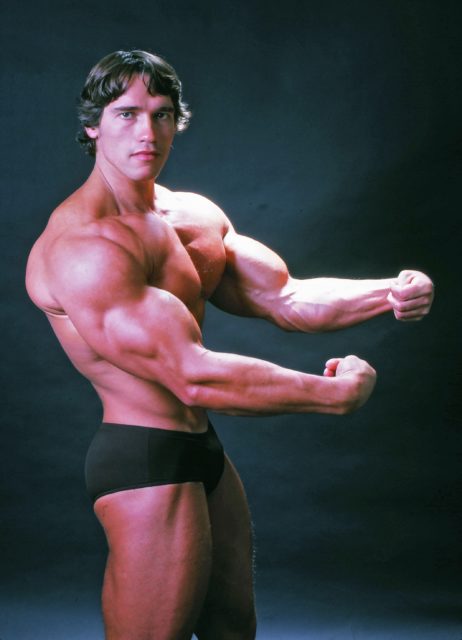 Born near Graz, Austria, Schwarzenegger had a difficult upbringing. His father was an alcoholic police chief who favored his eldest son, Patrick, over Schwarzenegger. Growing up, Schwarzenegger was lanky and thin, but dreamed of becoming a bodybuilder. His father would tease him for this and often pitted the two brothers against one another whenever he had the chance.

While pursuing his bodybuilding dream, he met Joe Weider, creator of the International Federation of BodyBuilders. Weider who sponsored the Mr. Universe and Mr. Olympia contests, and saw much potential in the young Schwarzenegger. Schwarzenegger earned an unprecedented five Mr. Universe titles and seven Mr. Olympia crowns during his bodybuilding career.

Schwarzenegger made bodybuilding mainstream, and it was only a matter of time before the young buff made it onto the big screen himself.

Schwarzenegger and DeVito were a comedy hit in Twins 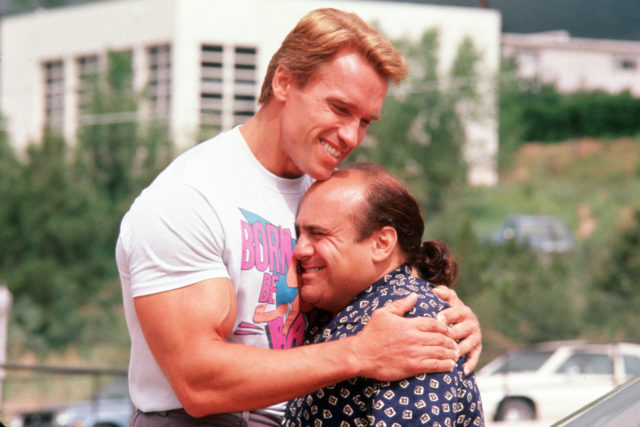 Given his large physique, Schwarzenegger was a perfect fit for action movies and was cast in films like Conan the Barbarian (1982), Terminator (1984), and Total Recall (1990). Alternatively, his large physique also suited comedy films as well, especially when he was cast alongside a famously small person, like Danny DeVito.

Twins has a hilarious plot that made the film an immediate success. Vincent (DeVito) and Julius (Schwarzenegger) play fraternal twins who were part of a science experiment and were separated at birth. Their birth mother wasn’t told about Vincent, and was led to believe that Julius had died. Julius eventually learns about Vincent and manages to track him down. Once they are reunited, the two get into crazy situations requiring their particular skill sets. The predicaments they get into are simply hilarious.

Twins was a huge success when it hit the box office, earning a$11 million in its first weekend in theatres. It was the number one film in the US upon its release and held its spot at the top for two weekends following opening. It went on to gross $112 domestically, $216 internationally, and was the fifth highest-grossing film in the US to be released in 1988. 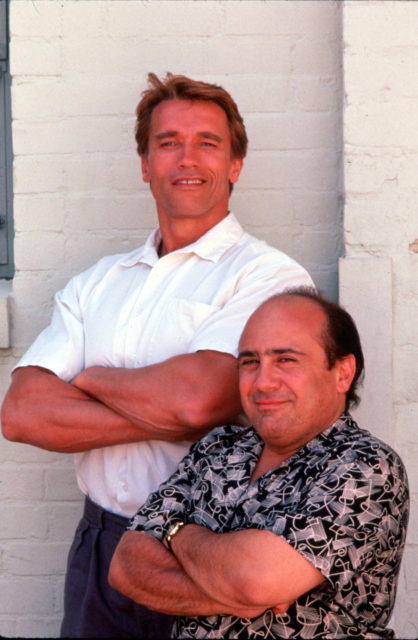 Arnold Schwarzenegger and Danny DeVito pose for a photo while on set of the comedy film Twins. (Photo Credit: Universal Studios / Zayne / MovieStillsDB)

Schwarzenegger and DeVito had great chemistry on set, as if they were real brothers! The funny antics they got up to in the film also happened off-camera, and Schwarzenegger was pranked pretty hard by DeVito. Some of it made filming rather difficult.

Schwarzenegger explained that “he’d always make me the most delicious pasta at lunch, and we’d eat and schmooze and have a cigar before we went back to work. One day, he packed my cigar with marijuana without telling me.” Even though they were on lunch, the high stayed with Schwarzenegger as they began filming again.

“My brain had completely forgotten the scene I had no trouble with before lunch. Danny was laughing up a storm and [director] Ivan [Reitman] flipped the cameras to film Danny’s close-up so I could read my lines off the page and we wouldn’t waste any time,” he said. “As we went on, it all slowly came back to me and I could join in the laughter and finish my scenes.” 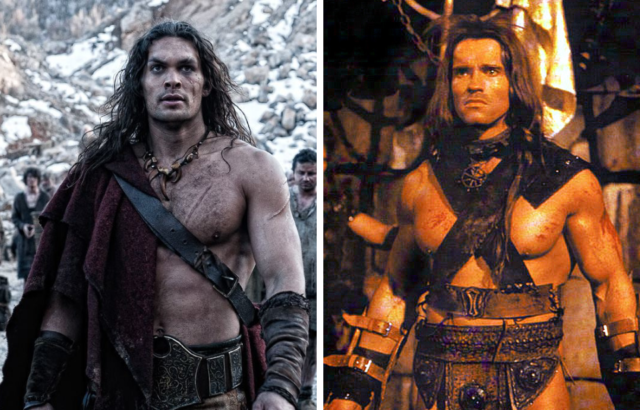 Jason Momoa was cast as Conan in the Conan the Barbarian remake, which was released the same year he made his debut on Game of Thrones as Khal Drogo, 2011. The role was previously played by Schwarzenegger in 1982 and the original film made over $79 million at the box office worldwide. The film was so enjoyable to sci-fi fantasy lovers that a sequel, Conan the Destroyer, was filmed in 1984 with Schwarzenegger as the lead again.

Unfortunately, Momoa’s turn as Conan was not as successful. Momoa said “I’ve been a part of a lot of things that really sucked, and movies where it’s out of your hands,” Momoa explained. “Conan [the Barbarian] was one of them. It’s one of the best experiences I had and it [was] taken over and turned into a big pile of [crap].” Ultimately, the remake underperformed at the box office.

Momoa would love to star in a remake of Twins 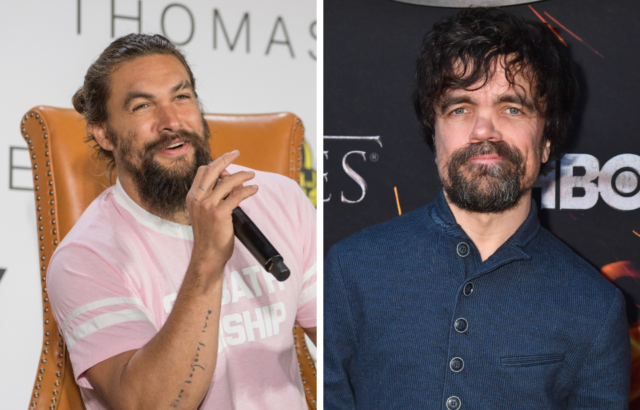 Momoa has some pretty big shoes to fill for a role in Twins, but he said he would absolutely want to star in a remake if it happened. He expressed his interest while speaking on a panel at Celebrity Fan Fest in Los Angeles in 2019. Momoa was telling the audience about his love for Twins when the idea of a possible reboot came up.

After a fan asked if he would star in it with his GoT co-star Peter Dinklage, Momoa said, “[Expletive] tell me where to sign! Absolutely. That’d be amazing. I love that movie.” Clearly, Momoa is pretty jazzed at the idea. He then agreed with the moderator that fans should take to Twitter to give the idea some traction and momentum.

A Twins sequel is on the way, but this time it’s Triplets 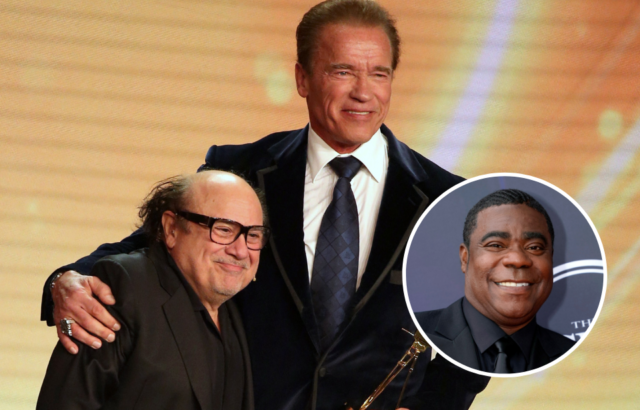 Fans of Twins have been waiting for a sequel for decades, and for a while there, people were convinced that a new duo, like Momoa and Dinklage, would fill the roles of Julius and Vincent. Well, that doesn’t seem to be the case, as Schwarzenegger and DeVito are returning to their roles in the upcoming sequel, Triplets, which will also feature Tracy Morgan as a third brother!

The idea came about years ago, when Schwarzenegger met Eddie Murphy. The two came up with the idea of having a third brother who was Black. Originally, Murphy was going to take on the role, but after the success of Coming 2 America, Murphy was booked up. Instead, Reitman cast Tracy Morgan.

More from us: Peter Dinklage Agrees With Controversial Game Of Thrones Ending

Reitman described the new script, saying, “secretly, there was a third baby born, a Black baby, who hasn’t been in touch with his siblings. They don’t know each other and very early in the movie they meet and it’s how they achieve a bond together after all these years. It’s really a film about family and, no matter how different we all are, we have to learn to get along. These guys have great chemistry together, and you can see that in the reel, and how much energy they bring out in each other.”