Is The Monaco Royal Family Cursed?

Great political dynasties tend to be plagued by rumors of being cursed. Just look at the Kennedys – how else can we explain the constant tragedy that seems to befall members of that family, even today? In Europe, it seems that Monaco’s royals are troubled by a similar ‘curse’ that ensured none of them would have a happy marriage.

Cursed by a Flemish Maiden 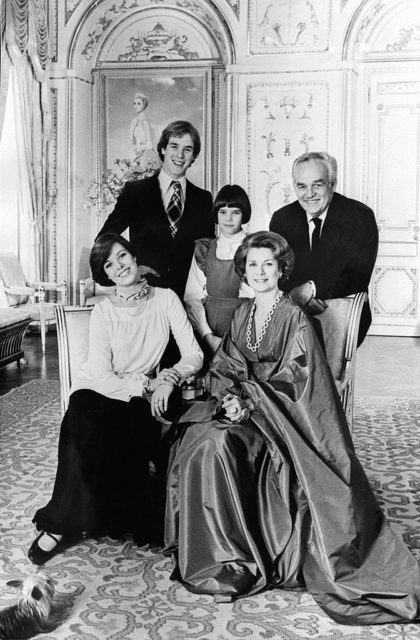 The Grimaldi royal family has supposedly been cursed since the 13th century. According to legend, Rainier I, the first Grimaldi ruler, kidnapped a beautiful Flemish maiden.

The maiden decided to hex Rainier I and his family to seek her revenge. The woman cursed the prince and all of his descendants, saying, “never will a Grimaldi find happiness in marriage.”

Another version of this legend claims that the curse came from a witch who was burned at the stake by order of Rainier I. However, the central idea in all versions of the curse is the same: the Grimaldi family will never be happily married.

The marriage and death of Princess Grace 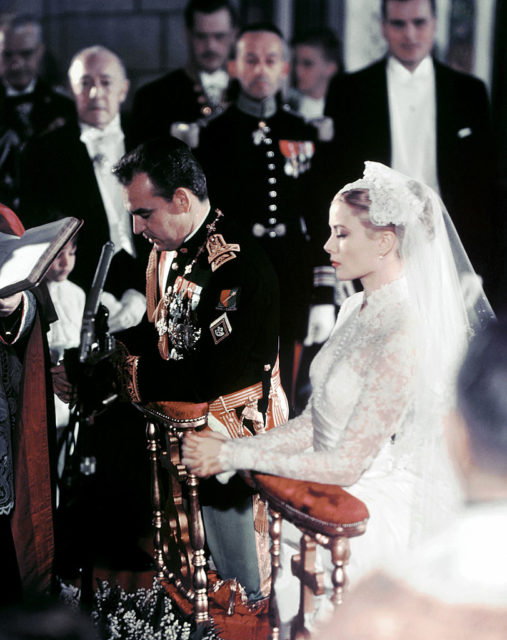 A photo taken on April 19, 1956 shows US actress Grace Kelly and Prince Rainier of Monaco during their wedding ceremony in Monaco. (Photo Credit: AFP via Getty Images)

The curse was only brought back to public consciousness after Princess Grace’s untimely death in 1982. However, even before she died, there were signs that Prince Rainier III and Grace Kelly’s marriage wasn’t always happy.

Grace Kelly met her future husband in the French Riviera in 1955 while Kelly was filming the movie To Catch a Thief. The pair wed on April 18, 1956, in what was called “the wedding of the century.” Grace Kelly, however, called it “the carnival of the century,” which essentially set the tone of the marriage.

Before marrying into Monaco’s royal family, Grace Kelly decided to give up her acting career and US citizenship. All of Kelly’s films were banned in Monaco. It is widely believed that Prince Rainier forced Kelly to give up acting because she didn’t seem to have any retirement plans while she was engaged. 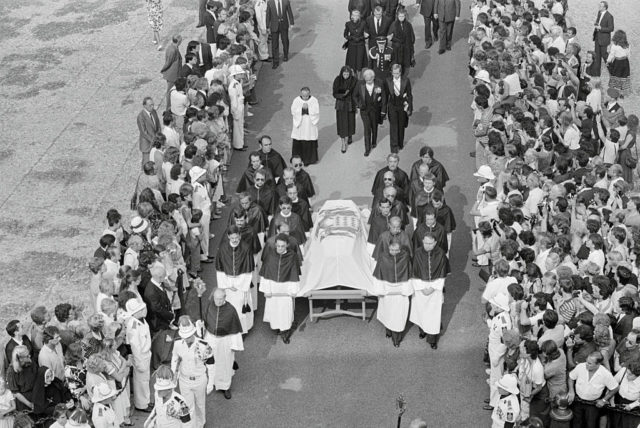 Grace Kelly’s marriage to Rainier III was plagued by rumors of infidelity. Only one month into the marriage, Grace Kelly learned that Prince Rainer allegedly had up to three mistresses – leaving Princess Grace humiliated and unhappy.

Real tragedy struck on September 13, 1982, when Grace Kelly and her daughter, Princess Stephanie, were involved in a car crash. Princess Stephanie recovered from her injuries, but Princess Grace died one day later, on September 14, 1982, at the age of 52 years old. Prince Rainier III supposedly never recovered from the death of his wife. He died in 2005 when he was 81 years old. 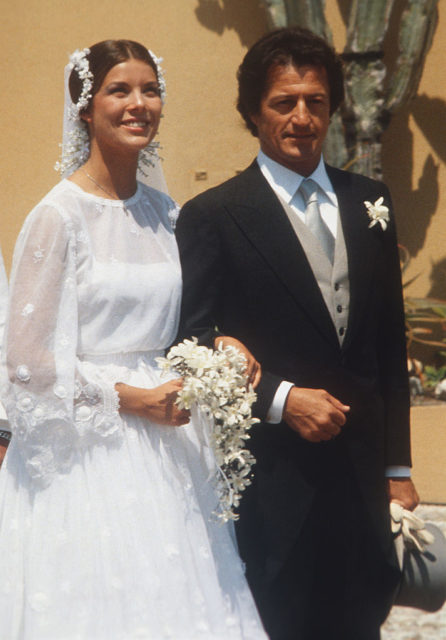 Princess Caroline of Monaco and Philippe Junot after their wedding in Monaco on June 29, 1978. (Photo Credit: Keystone/ Getty Images)

The eldest of Grace Kelly and Prince Rainier’s children is Princess Caroline, who has unfortunately seen her fair share of tragedy in her love life. After Princess Grace’s death, Princess Caroline stepped up to be the de facto First Lady of Monaco. Later, she went on to study at the Sorbonne in Paris, where she met her first husband, Philippe Junot.

Philippe Junot was a French banker and playboy. Much to her parents’ dismay, the pair married on June 28, 1978. Caroline was only 21, while Philippe was 38. However, this marriage only lasted two years, and the pair divorced in 1980. 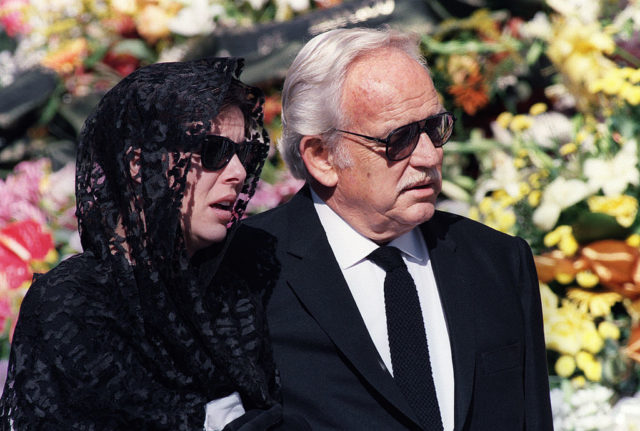 Princess Caroline of Monaco arrives with her father, Prince Rainier III at the Monaco cathedral to attend the funeral ceremony for her husband Stefano Casiraghi who was killed in an offshore powerboat racing accident on October 3, 1990 (Photo Credit: AFP via Getty Images)

In 1983, Princess Caroline married a second time, to a man named Stefano Casiraghi. He was the heir to an Italian industrial fortune. Together, Caroline and Stefano had three children. However, tragedy struck on October 3, 1990, when Stefano was killed in a speedboat racing accident. Their children were all very young at the time of Stefano’s death.

Princess Caroline married a third time in 1999 to a man also of a royal bloodline. Caroline wed Prince Ernst August of Hanover, Duke of Brunswick. Together, Caroline and Ernst had a daughter, born six months after they married. Prince Ernst apparently has quite the temper. Allegedly, he broke a TV cameraman’s nose with his umbrella in 1998 and was later fined for beating a disco owner in Kenya. The pair separated in 2009 but have not yet officially divorced.

Princess Stephanie received only 1% of her father’s estate 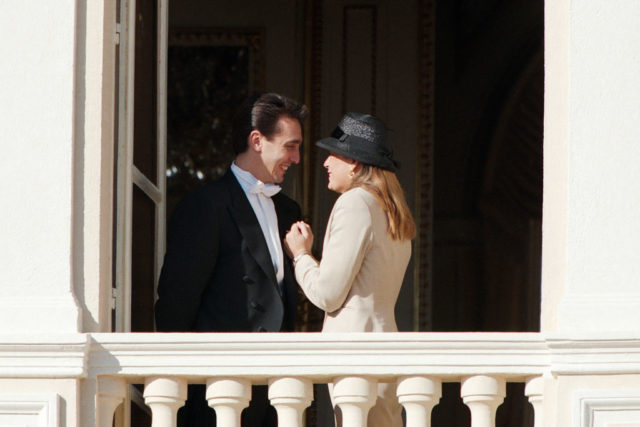 At one point, Princess Stephanie was easily Monaco’s most controversial royal. (Today, that torch has been passed to her brother and his wife, Princess Charlene). Princess Stephanie was only 17 years old when she was involved in the same car crash that killed Princess Grace. We can’t imagine the trauma she must have dealt with throughout her entire life.

Since this car crash, Princess Stephanie has been forced into the public eye and has been the subject of intense speculation. The press dubbed Princess Stephanie the ‘wild child‘ of the Grimaldi family and didn’t hesitate to report on her tumultuous love life. 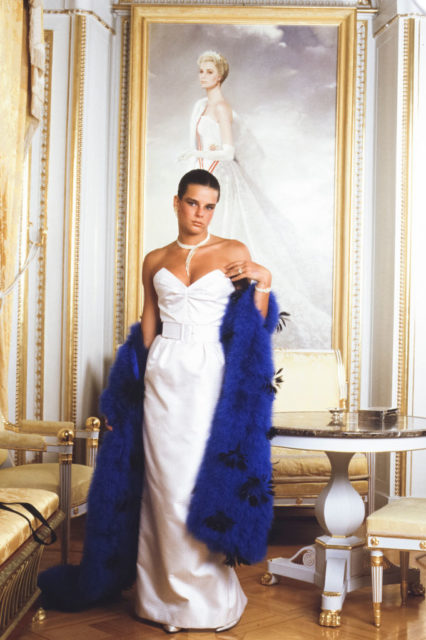 Princess Stephanie poses in front of a photo of her mother, Princess Grace, circa 1980. (Photo Credit: Bernard CHARLON/ Getty Images)

In 1991, Princess Stephanie became romantically involved with her former bodyguard, Daniel Ducruet. Ducruet’s girlfriend was six months pregnant when the pair went public. The couple had two children and eventually married in 1995.

Only a year after the pair married, Daniel was photographed cavorting with cabaret singer Muriel ‘Fili’ Houteman. This story made headlines all throughout Europe. On September 16, 1996, only two weeks after the story of Daniel’s infidelity broke in Europe, Princess Stephanie filed for divorce.

In 1998, Princess Stephanie made headlines again after giving birth to a child. The identity of her daughter’s father remained a mystery, though today it is well known and that the baby’s father was her bodyguard, Jean-Raymond Gottlieb. 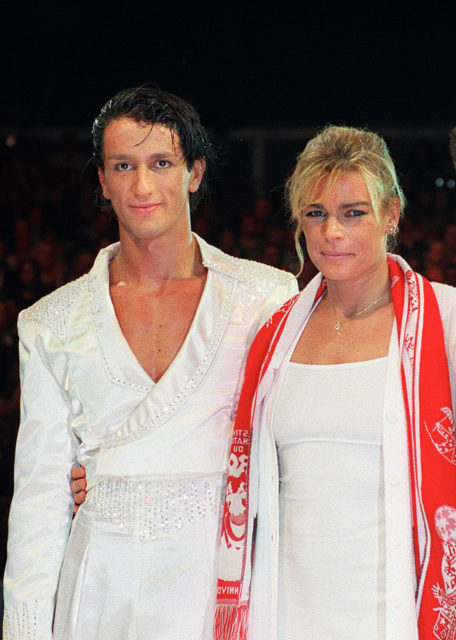 In 2001, Princess Stephanie started an affair with married elephant trainer Franco Knie. She then moved, along with her three children, into a Swiss caravan to live with the circus. Although that relationship came to an end in 2002, she did end up marrying circus performer Adans Lopez Peres in 2003. That marriage ended just as quickly as it began in 2004.

When Prince Rainier III died in 2005, he left Princess Caroline and Prince Albert the bulk of his fortune. Princess Stephanie was left only 1% of her father’s estate. Many people believe that this was Prince Rainier’s last attempt to protect his youngest daughter from making any more poor decisions with men.

The secretive but tumultuous relationship between Prince Albert and Princess Charlene 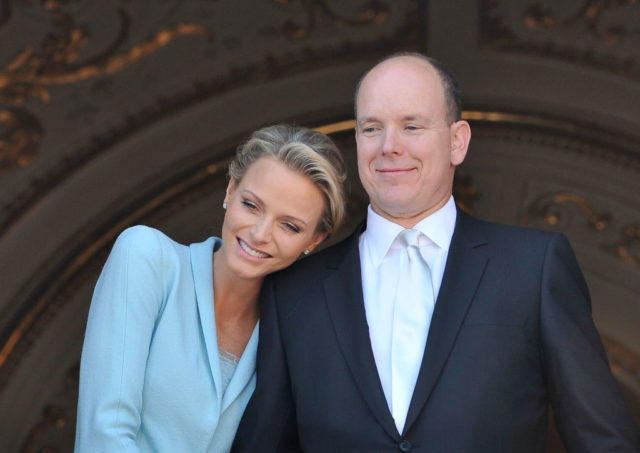 Today, Prince Albert and Princess Charlene’s marriage tends to make headlines around the world. Throughout the 1990s, Prince Albert was known as a playboy. The pair began dating in 2006 and married in 2011. During their entire relationship, Prince Albert has fathered multiple different children.

Only days before their wedding, it was reported that Charlene had attempted to flee Monaco after learning Prince Albert, who at this time had already fathered two illegitimate children, had fathered a third love child. During her engagement, Charlene allegedly made not one escape attempt but three. Though she ended up marrying Prince Albert, Charlene didn’t seem like a happy bride on her wedding day. In fact, news outlets reported that Charlene cried throughout the entire ceremony.

Today, the pair has two children together and remain married. However, that does not mean that the marriage is a happy one. In December 2020, a Brazilian woman sued Prince Albert for paternity of her child. 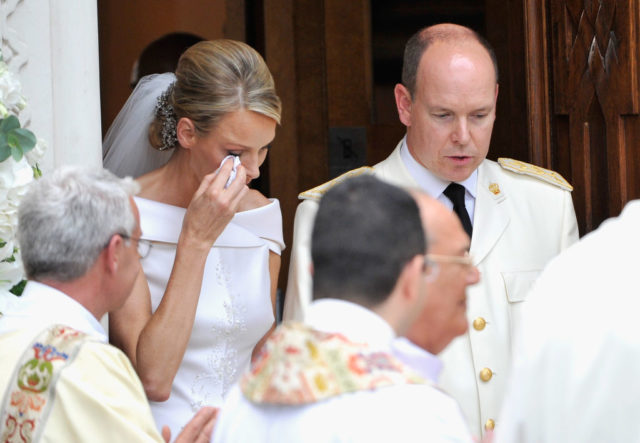 Princess Charlene of Monaco wipes away a tear as she and Prince Albert II of Monaco leave Sainte Devote church after their religious wedding ceremony on July 2, 2011 in Monaco. (Photo Credit: Gareth Cattermole/ Getty Images)

In early 2021, Charlene traveled to her native South Africa for philanthropic work. However, upon arrival, she revealed that she had contracted an infection and had been deemed unsuitable for flying. She remained in South Africa for several months, and was only visited by Prince Albert and her children one time.

Other evidence of a ‘curse’ 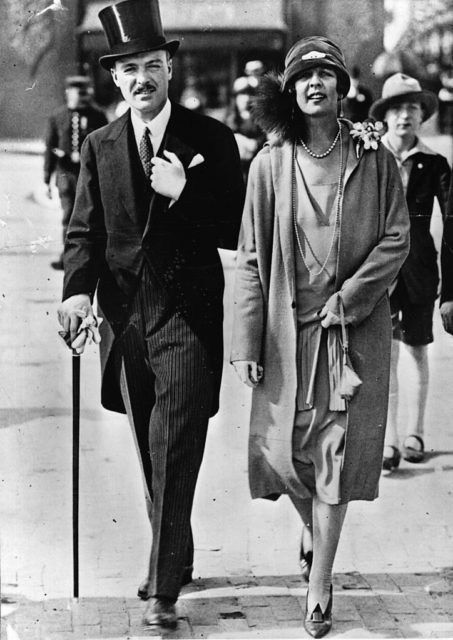 More from us: Inside The Kennedy “Curse” — The Family’s Strange Misfortunes Never Seem To Stop

Though today the ‘Grimaldi curse’ seems to be more prevalent than ever, there is evidence that Monaco’s royal family has been unlucky for several generations. Prince Rainier III’s parents, Count Pierre de Polignac and Princess Charlotte, separated after 10 years of marriage when it became clear that Pierre was a homosexual. Princess Charlotte later moved in with her Italian doctor.

Princess Charlotte was the daughter of Louis II, Prince of Monaco. She was Prince Louis II’s illegitimate daughter, but was adopted by him after he produced no legitimate children.

Prince Louis II’s parents did not have a happy marriage, either. His parents, Prince Albert and Lady Mary Victoria Hamilton, had only been married for one year when his 19-year-old mother fled with her young son. The pair later had their marriage annulled.

« Lost Scripts from ‘The Lord of the Rings’ Found With Original Notes by J.R.R. Tolkien
A Reporter Exposed Jackie Kennedy and Aristotle Onassis’s Relationship »